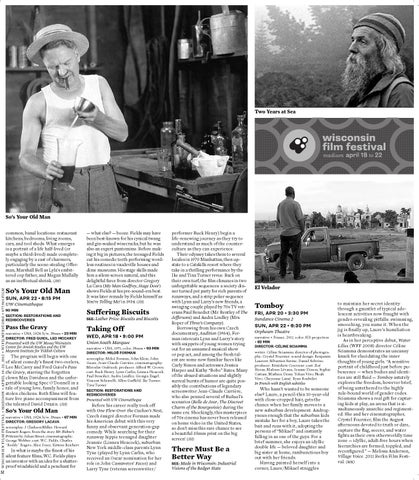 common, banal locations: restaurant kitchens, bedrooms, living rooms, cars, and tool sheds. What emerges is a portrait of a life half-lived (or maybe a third-lived) made completely engaging by a cast of charmers, particularly the scene-stealing Offerman, Marshall Bell as Lyla’s embittered cop father, and Megan Mullally as an ineffectual shrink. (JH)

The program will begin with one of silent comedy’s ﬁnest two-reelers, Leo McCarey and Fred Guiol’s Pass the Gravy, starring the forgotten clown Max Davidson and the unforgettable looking Spec O’Donnell in a tale of young love, family honor, and stolen chickens. Both ﬁlms will feature live piano accompaniment from the talented David Drazin. (JH)

In what is maybe the ﬁnest of his silent feature ﬁlms, W.C. Fields plays an inventor with an idea for a shatterproof windshield and a penchant for

— what else? — booze. Fields may have been best-known for his cynical twang and gin-soaked wisecracks, but he was also an expert pantomime. Before making it big in pictures, the teenaged Fields cut his comedic teeth performing wordless routines in vaudeville houses and dime museums. His stage skills made him a silent-screen natural, and this delightful farce from director Gregory La Cava (My Man Godfrey, Stage Door) shows Fields at his pre-sound-era best. It was later remade by Fields himself as You’re Telling Me! in 1934. (JH)

Before his career really took off with One Flew Over the Cuckoo’s Nest, Czech émigré director Forman made his American debut with this very funny and observant generation-gap comedy. While searching for their runaway hippie teenaged daughter Jeannie (Linnea Heacock), suburban New York middle-class parents Lynn Tyne (played by Lynn Carlin, who received an Oscar nomination for her role in John Cassavetes’ Faces) and Larry Tyne (veteran screenwriter/

performer Buck Henry) begin a life-renewing journey as they try to understand as much of the counterculture as they can experience. Their odyssey takes them to several locales in 1970 Manhattan, then upstate to a Catskills resort where they take in a thrilling performance by the Ike and Tina Turner revue. Back on their own turf, the ﬁlm climaxes in two unforgettable sequences: a society dinner turned pot party for rich parents of runaways, and a strip poker sequence with Lynn and Larry’s new friends, a swinging couple played by 70s TV veterans Paul Benedict (Mr. Bentley of The Jeffersons) and Audra Lindley (Mrs. Roper of Three’s Company). Borrowing from his own Czech documentary, Audition (1964), Forman intercuts Lynn and Larry’s story with snippets of young women trying out for an unnamed musical show or pop act, and among the fresh talent are some now familiar faces like Carly Simon and actresses Jessica Harper and Kathy “Bobo” Bates. Many of the absurd situations and slightly surreal bursts of humor are quite possibly the contributions of legendary screenwriter Jean-Claude Carrière, who also penned several of Buñuel’s scenarios (Belle de Jour, The Discreet Charm of the Bourgeoisie) during the same era. Shockingly, this masterpiece of 70s cinema has never been released on home video in the United States, so don’t miss this rare chance to see a beautiful 35mm print on the big screen! (JH)

There Must Be a Better Way SEE: Made in Wisconsin: Industrial Visions of the Badger State

Who hasn’t wanted to be someone else? Laure, a pencil-thin 10-year-old with close-cropped hair, gets the chance when her family moves to a new suburban development. Androgynous enough that the suburban kids mistake her for a boy, Laure takes the bait and runs with it, adopting the persona of “Mikael” and instantly falling in as one of the guys. For a brief summer, she enjoys an idyllic double life — beloved daughter and big sister at home, rambunctious boy out with her friends. Having painted herself into a corner, Laure/Mikael struggles

to maintain her secret identity through a gauntlet of typical adolescent activities now fraught with gender-revealing pitfalls: swimming, smooching, you name it. When the jig is ﬁnally up, Laure’s humiliation is heartbreaking. As in her perceptive debut, Water Lilies (WFF 2008) director Céline Sciamma demonstrates an uncanny knack for elucidating the inner thoughts of young girls. “A sensitive portrait of childhood just before pubescence — when bodies and identities are still ﬂuid — Tomboy astutely explores the freedom, however brief, of being untethered to the highly rule-bound world of gender codes. Sciamma shows a real gift for capturing kids at play, an arena that is simultaneously anarchic and regimented. She and her cinematographer, Crystel Fournier, ﬁlm the August afternoons devoted to truth or dare, capture the ﬂag, soccer, and water ﬁghts as their own otherworldly time zone — idyllic, adult-free hours when hierarchies are formed, toppled, and reconﬁgured.” — Melissa Anderson, Village Voice. 2011 Berlin Film Festival. (MK)