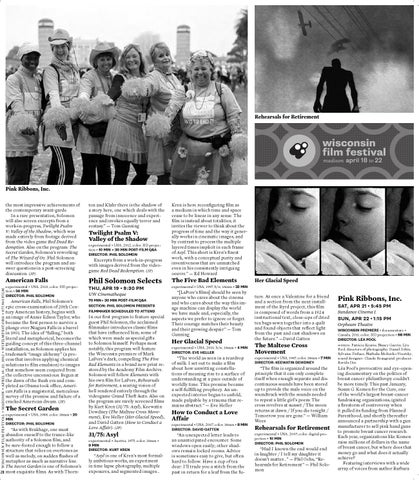 Pink Ribbons, Inc. the most impressive achievements of the contemporary avant-garde. In a rare presentation, Solomon will also screen excerpts from a work-in-progress, Twilight Psalm V: Valley of the Shadow, which was made entirely from footage derived from the video game Red Dead Redemption. Also on the program: The Secret Garden, Solomon’s reworking of The Wizard of Oz. Phil Solomon will introduce the program and answer questions in a post-screening discussion. (JP)

ton and Klahr there is the shadow of a story here, one which deals with the passage from innocence and experience and invokes equally terror and ecstasy.” — Tom Gunning

American Falls, Phil Solomon’s epic cross-examination of 20th Century American history, begins with an image of Annie Edson Taylor, who became the ﬁrst person to survive a plunge over Niagara Falls in a barrel in 1901. The idea of “falling,” both literal and metaphorical, becomes the guiding concept of this three-channel installation, as Solomon applies his trademark “image alchemy” (a process that involves applying chemical solutions to ﬁlm emulsion) to images that somehow seem conjured from the collective unconscious. Begun at the dawn of the Bush era and completed as Obama took ofﬁce, American Falls is a magisterial, meticulous survey of the promise and failure of a cracked American dream. (JP)

“As with Brakhage, one must abandon oneself to the trance-like authority of a Solomon ﬁlm, and be sure-footed enough to follow a structure that relies on overtones as well as melody, on sudden ﬂashes of metaphor as much as narrative line. The Secret Garden is one of Solomon’s 28 most exquisite ﬁlms. As with Thorn-

Excerpts from a work-in-progress with images derived from the videogame Red Dead Redemption. (JP)

In our ﬁrst program to feature special guest Phil Solomon, the acclaimed ﬁlmmaker introduces classic ﬁlms that have inﬂuenced him, some of which were made as special gifts to Solomon himself. Perhaps most notably, this program will feature the Wisconsin premiere of Mark LaPore’s dark, compelling The Five Bad Elements in a brand new print restored by the Academy Film Archive. Solomon will follow Elements with his own ﬁlm for LaPore, Rehearsals for Retirement, a searing vision of hell rendered entirely through the videogame Grand Theft Auto. Also on the program are rarely screened ﬁlms by Kurt Kren (31/75: Asyl), Keewatin Dewdney (The Maltese Cross Movement), Eve Heller (Her Glacial Speed), and David Gatten (How to Conduct a Love Affair). (JP)

“Asyl is one of Kren’s most formally ambitious works, an experiment in time lapse photography, multiple exposures, and segmented images...

Kren is here reconﬁguring ﬁlm as a medium in which time and space cease to be linear in any sense. The ﬁlm is instead about totalities; it invites the viewer to think about the progress of time and the way it generally works in cinematic images, and by contrast to process the multiple layered times implicit in each frame of Asyl. This short is Kren’s ﬁnest work, with a conceptual purity and inventiveness that are unmatched even in his consistently intriguing oeuvre.” — Ed Howard

“[LaPore’s ﬁlms] should be seen by anyone who cares about the cinema and who cares about the way this image machine can display the world we have made and, especially, the aspects we prefer to ignore or forget. Their courage matches their beauty and their growing despair.” — Tom Gunning

“The world as seen in a teardrop of milk. I set out to make a ﬁlm about how unwitting constellations of meaning rise to a surface of understanding at a pace outside of worldly time. This premise became a self-fulﬁlling prophecy. An unexpected interior began to unfold, made palpable by a trauma that remains abstract.” — Eve Heller

“An unexpected letter leads to an unanticipated encounter. Some windows open easily; other shadows remain locked rooms. Advice is sometimes easy to give, but often hard to follow. Have a cup of tea dear: I’ll trade you a stitch from the past in return for a leaf from the fu-

ture. At once a Valentine for a friend and a section from the next installment of the Byrd project, this ﬁlm is composed of words from a 1924 instructional text, close-ups of dried tea bags sewn together into a quilt and found objects that reﬂect light from the past and cast shadows on the future.” —David Gatten

“The ﬁlm is organized around the principle that it can only complete itself when enough separate and discontinuous sounds have been stored up to provide the male voice on the soundtrack with the sounds needed to repeat a little girl’s poem: The cross revolves at sunset / The moon returns at dawn / If you die tonight / Tomorrow you are gone.” — William Wees

“Had I known the end would end in laughter / I tell my daughter it doesn’t matter...” — Phil Ochs, “Rehearsals for Retirement” — Phil Solomon

Léa Pool’s provocative and eye-opening documentary on the politics of breast cancer philanthropy couldn’t be more timely. This past January, Susan G. Komen for the Cure, one of the world’s largest breast-cancer fundraising organizations, ignited a ﬁrestorm of controversy when it pulled its funding from Planned Parenthood, and shortly thereafter announced a partnership with a gun manufacturer to sell pink hand guns to promote breast cancer research. Each year, organizations like Komen raise millions of dollars in the name of breast cancer, but where does that money go and what does it actually achieve? Featuring interviews with a wide array of voices from author Barbara