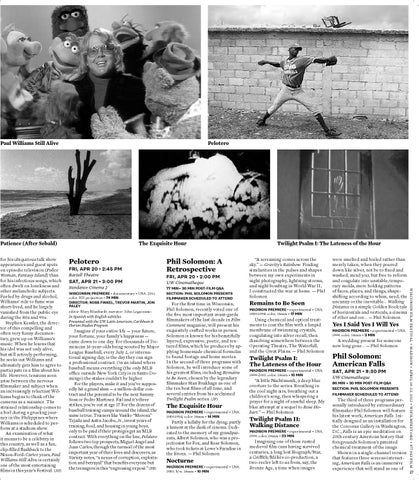 Imagine if your entire life — your future, your fortune, your family’s happiness — came down to one day. For thousands of Dominican 16-year-olds being scouted by Major League Baseball, every July 2, or international signing day, is the day they can sign a professional contract. On an island where baseball means everything (the only MLB ofﬁce outside New York City is in Santo Domingo) the stakes couldn’t be higher. For the players, make it and you’ve supposedly hit a grand slam — a million-dollar contract and the potential to be the next Sammy Sosa or Pedro Martinez. Fail and it’s three strikes, you’re out at age 17. For the dozens of baseball training camps around the island, the same is true. Trainers like Vasilio “Morena” Tejada and Astin Jacobo, Jr., invest years of training, food, and housing in young boys, only to be paid if their protégés get an MLB contract. With everything on the line, Pelotero follows two top prospects, Miguel Angel and Juan Carlos, through the turmoil of the most important year of their lives and discovers, as Variety notes, “a nexus of corruption, exploitation and betrayal” that beneﬁts everyone but the teenagers in this “engrossing exposé.” (PB)

For the ﬁrst time in Wisconsin, Phil Solomon, recently voted one of the ﬁve most important avant-garde ﬁlmmakers of the last decade in Film Comment magazine, will present his exquisitely crafted works in person. Solomon is known for his beautifully layered, expressive, poetic, and textured ﬁlms, which he produces by applying homemade chemical formulas to found footage and home movies. In the second of three programs with Solomon, he will introduce some of his greatest ﬁlms, including Remains to Be Seen, chosen by the legendary ﬁlmmaker Stan Brakhage as one of the ten best ﬁlms of all time, and several entries from his acclaimed Twilight Psalm series. (JP)

Partly a lullaby for the dying, partly a lament at the dusk of cinema. Dedicated to the memory of my grandparents, Albert Solomon, who was a projectionist for Fox, and Rose Solomon, who took tickets at Lowe’s Paradise in the Bronx. — Phil Solomon

Twilight Psalm I: The Lateness of the Hour “A screaming comes across the sky.” — Gravity’s Rainbow. Finding similarities in the pulses and shapes between my own experiments in night photography, lightning storms, and night bombing in World War II, I constructed the war at home. — Phil Solomon

Using chemical and optical treatments to coat the ﬁlm with a limpid membrane of swimming crystals, coagulating into silver recall, then dissolving somewhere between the Operating Theatre, The Waterfall, and the Great Plains. — Phil Solomon

“A little Nachtmusik, a deep blue overture to the series. Breathing in the cool night airs, breathing out a children’s song; then whispering a prayer for a night of easeful sleep. My blue attempt at a sequel to Rose Hobart.” — Phil Solomon

Imagining one of those rusted medieval ﬁlm cans having survived centuries, a long lost Biograph/Star, a Grifﬁth/Méliès co-production, a two-reeler left to us from, say, the Bronze Age, a time when images

were smelted and boiled rather than merely taken, when they poured down like silver, not be to ﬁxed and washed, mind you, but free to reform and coagulate into unstable, temporary molds, mere holding patterns of faces, places, and things, shapeshifting according to whim, need, the uncanny or the inevitable... Walking Distance is a simple Golden Book tale of horizontals and verticals, a cinema of ether and ore... — Phil Solomon

A wedding present for someone now long gone… — Phil Solomon

The third of three programs personally introduced by extraordinary ﬁlmmaker Phil Solomon will feature his latest work, American Falls. Initially designed as an installation for the Corcoran Gallery in Washington, D.C., Falls is an epic meditation on 20th century American history that foregrounds Solomon’s patented chemical treatment of the image. Shown in a single-channel version that features three screens interacting, American Falls is an immersive experience that will stand as one of

for his ubiquitous talk show appearances and guest spots on episodic television (Police Woman, Fantasy Island) than for his infectious songs, which often dwelt on loneliness and other melancholic subjects. Fueled by drugs and alcohol, Williams’ ride to fame was short-lived, and he largely vanished from the public eye during the 80s and 90s. Stephen Kessler, the director of this compelling and often very funny documentary, grew up on Williams’s music. When he learns that his idol was not only alive, but still actively performing, he seeks out Williams and ultimately gets him to agree to participate in a ﬁlm about his life. However, tensions soon arise between the nervous ﬁlmmaker and subject when an increasingly reluctant Williams begins to think of the cameras as a nuisance. The strained relationship comes to a boil during a grueling journey in the Philippines where Williams is scheduled to perform at a stadium show. An examination of what it means to be a celebrity in this country, as well as a fun, clip-ﬁlled ﬂashback to the Nixon-Ford-Carter years, Paul Williams Still Alive is certainly one of the most entertaining ﬁlms in this year’s Festival. (JH)