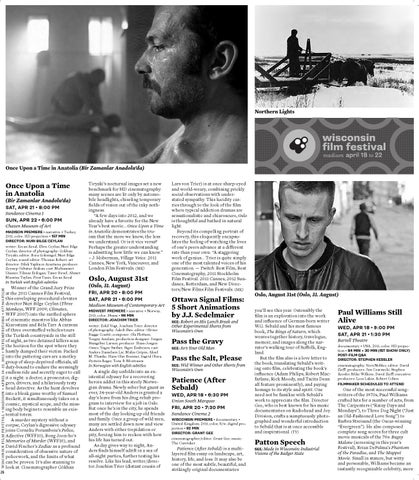 Once Upon a Time in Anatolia (Bir Zamanlar Anadolu’da)

Winner of the Grand Jury Prize at the 2011 Cannes Film Festival, this enveloping procedural elevates director Nuri Bilge Ceylan (Three Monkeys, WFF 2009; Climates, WFF 2007) into the rariﬁed sphere of cinematic maestros like Abbas Kiarostami and Béla Tarr. A caravan of three overstuffed vehicles tours the Turkish countryside in the still of night, as two detained killers scan the horizon for the spot where they hastily dumped their victim. Packed into the puttering cars are a motley group of sleep-deprived ofﬁcials, all duty-bound to endure the seemingly endless ride and secretly eager to call it a night: a doctor, a prosecutor, diggers, drivers, and a hilariously testy head detective. As the hunt devolves into a bleak game worthy of Samuel Beckett, it simultaneously takes on a cosmic, mystical scope, and the missing body begins to resemble an existential totem. A murder mystery without a corpse, Ceylan’s digressive odyssey joins Corneliu Porumboiu’s Police, Adjective (WFF10), Bong Joon-ho’s Memories of Murder (WFF10), and David Fincher’s Zodiac as a profound consideration of obsessive nature of policework, and the limits of what can be proven. It’s also stunning to look at. Cinematographer Gökhan

Tiryaki’s nocturnal images set a new benchmark for HD cinematography: many scenes are lit only by automobile headlights, chiseling temporary ﬁelds of vision out of the inky nothingness. “A few days into 2012, and we already have a favorite for the New Year’s best movie… Once Upon a Time in Anatolia demonstrates the truism that the more we know, the less we understand. Or is it vice versa? Perhaps the greater understanding is admitting how little we can know.” – J. Hoberman, Village Voice. 2011 Cannes, New York, Vancouver, and London Film Festivals. (MK)

A single day unfolds into an existential odyssey for a recovering heroin addict in this steely Norwegian drama. Newly sober but gaunt as ever, 34-year-old Anders is granted a day’s leave from his drug rehab program to interview for a job in Oslo. But once he’s in the city, he spends most of the day looking up old friends and family. Once a group of wild men, many are settled down now and view Anders with either trepidation or pity, forcing him to reckon with how his life has turned out. As day gives way to night, Anders ﬁnds himself adrift in a sea of all-night parties, further testing his resolve. Like his lead, writer/director Joachim Trier (distant cousin of

Lars von Trier) is at once sharp-eyed and world-weary, combining prickly social observations with understated sympathy. This lucidity carries through to the look of the ﬁlm: where typical addiction dramas are sensationalistic and chiaroscuro, Oslo is thoughtful and bathed in natural light. Beyond its compelling portrait of recovery, this eloquently encapsulates the feeling of watching the lives of one’s peers advance at a different rate than your own. “A staggering work of genius... Trier is quite simply one of the most talented voices of his generation. — Twitch. Best Film, Best Cinematography, 2011 Stockholm Film Festival. 2011 Cannes, 2012 Sundance, Rotterdam, and New Directors/New Films Film Festivals. (MK)

you’ll see this year. Ostensibly the ﬁlm is an exploration into the work and inﬂuence of German-born writer W.G. Sebald and his most famous book, The Rings of Saturn, which weaves together history, travelogue, memoir, and images along the narrator’s walking tour of Suffolk, England. But the ﬁlm also is a love letter to the book, translating Sebald’s writing onto ﬁlm, celebrating the book’s inﬂuence (Adam Philips, Robert Macfarlane, Rick Moody, and Tacita Dean all feature prominently), and paying homage to its style and spirit. One need not be familiar with Sebald’s work to appreciate the ﬁlm. Director Gee, who is best known for his music documentaries on Radiohead and Joy Division, crafts a sumptuously photographed and wonderful introduction to Sebald that is at once accessible and inspirational. (TY)

Pass the Salt, Please SEE: Wid Winner and Other Shorts from Wisconsin’s Own

Patience (After Sebald) is a multilayered ﬁlm essay on landscape, art, history, life, and loss. It may also be one of the most subtle, beautiful, and strikingly original documentaries

SEE: Made in Wisconsin: Industrial Visions of the Badger State

One of the most successful songwriters of the 1970s, Paul Williams crafted hits for a number of acts, from The Carpenters (“Rainy Days and Mondays”), to Three Dog Night (“Just an Old-Fashioned Love Song”) to Barbra Streisand (the Oscar-winning “Evergreen”). He also composed complete song scores for three cult movie musicals of the 70s: Bugsy Malone (screening in this year’s Festival), Brian DePalma’s Phantom of the Paradise, and The Muppet Movie. Small in stature, but witty and personable, Williams became an instantly recognizable celebrity, more