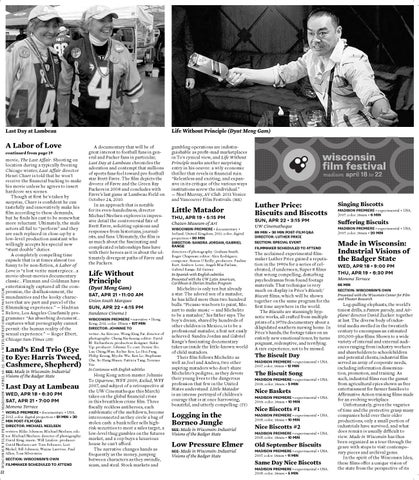 A Labor of Love

movie, The Last Affair. Shooting on location during a typically freezing Chicago winter, Last Affair director Henri Charr is told that he won’t receive the ﬁnancial backing to make his movie unless he agrees to insert hardcore sex scenes. Though at ﬁrst he’s taken by surprise, Charr is conﬁdent he can tastefully and innovatively make his ﬁlm according to these demands, but he ﬁnds his cast to be somewhat more reluctant. Ultimately, the male actors all fail to “perform” and they are each replaced in close-up by a low-level production assistant who willingly accepts his special new “stunt double” duties. A completely compelling time capsule that is at times almost too funny to be non-ﬁction, A Labor of Love is “a lost verite masterpiece...a movie-about-movies documentary classic...Flaxman and Goldman have entertainingly captured all the compromise, the disillusionment, the mundanities and the kooky characters that are part and parcel of the ﬁlmmaking experience.” — Hadrian Belove, Los Angeles Cinefamily programmer. “An absorbing document… captures what pornography cannot permit: the human reality of the sexual experience.” — Roger Ebert, Chicago Sun-Times (JH)

Life Without Principle (Dyut Meng Gam) A documentary that will be of great interest to football fans in general and Packer fans in particular, Last Day at Lambeau chronicles the adoration and contempt that millions of sports fans feel toward pro football star Brett Favre. The ﬁlm depicts the divorce of Favre and the Green Bay Packers in 2008 and concludes with Favre’s last game at Lambeau Field on October 24, 2010. In an approach that is notable for its even-handedness, director Michael Neelsen explores in impressive detail the controversial fate of Brett Favre, soliciting opinions and responses from historians, journalists, and fans. Ultimately, the ﬁlm is as much about the fascinating and complicated relationships fans have with their heroes as it is about the ultimately divergent paths of Favre and the Packers.

Hong Kong action master Johnnie To (Sparrow, WFF 2009; Exiled, WFF 2007, and subject of a retrospective at the UW Cinematheque this March) takes on the global ﬁnancial crisis in this breathless crime ﬁlm. Three ﬁscally reckless antiheroes, each emblematic of the meltdown, become interconnected as they circle a bag of stolen cash: a bank teller sells highrisk securities to meet a sales target, a low-level thug gambles on the futures market, and a cop buys a luxurious house he can’t afford. The narrative changes hands as frequently as the money, jumping between characters as they swindle, scam, and steal. Stock markets and

gambling operations are indistinguishable as proﬁt-mad marketplaces in To’s cynical view, and Life Without Principle marks another surprising entry in his oeuvre: a wily economic thriller that revels in ﬁnancial ruin. “Relentless and exciting, and expansive in its critique of the various ways institutions screw the individual.” — Noel Murray, AV Club. 2011 Venice and Vancouver Film Festivals. (MK)

The acclaimed experimental ﬁlmmaker Luther Price gained a reputation in the 1990s for a series of celebrated, if underseen, Super 8 ﬁlms that wrung compelling, disturbing psychodramas from found footage materials. That technique is very much on display in Price’s Biscuit/ Biscott ﬁlms, which will be shown together on the same program for the ﬁrst time anywhere in the world. The Biscuits are stunningly hypnotic works, all crafted from multiple prints of a 1970s documentary about a dilapidated southern nursing home. In Price’s hands, the footage takes on an entirely new emotional tenor, by turns poignant, redemptive, and terrifying. A rare experience, not to be missed.

Michelito is only ten but already a star. The adored son of a matador, he has killed more than two hundred bulls. “Picasso was born to paint, Mozart to make music — and Michelito to be a matador,” his father says. The boy’s dream, shared by hundreds of other children in Mexico, is to be a professional matador, a feat not easily achieved. Sandra Jordan and Gabriel Range’s fascinating documentary takes us inside the little-known world of child matadors. Their ﬁlm follows Michelito as well as Joel and Andrea, two other aspiring matadors who don’t share Michelito’s pedigree, as they devote their young lives to the dangerous profession that few in the United States understand. Little Matador is an intense portrayal of children’s courage that is at once harrowing, beautiful, and utterly compelling. (TY)

Logging in the Borneo Jungle SEE: Made in Wisconsin: Industrial Visions of the Badger State

SEE: Made in Wisconsin: Industrial

Visions of the Badger State

Presented with the Wisconsin Center for Film and Theater Research

Log-pulling elephants, the world’s tiniest drills, a Patton parody, and Airplane! director David Zucker: together at last. The diverse body of industrial media swelled in the twentieth century to encompass an estimated 100,000-plus ﬁlms. Shown to a wide variety of internal and external audiences ranging from industry workers and shareholders to schoolchildren and potential clients, industrial ﬁlm served an array of corporate needs, including information dissemination, promotion, and training. As such, industrial ﬁlms run the gamut from agricultural epics shown as free entertainment for farmer families to Afﬁrmative Action training ﬁlms made for an evolving workplace. Unfortunately, given the vagaries of time and the protective grasp many companies hold over their older productions, only a small portion of industrials have survived, and what does remain is usually difﬁcult to view. Made in Wisconsin has thus been organized as a tour through the genre with stops to visit contemporary pieces and archival gems. In the spirit of the Wisconsin Idea, these ﬁlms offer a unique vision of the state from the perspective of its