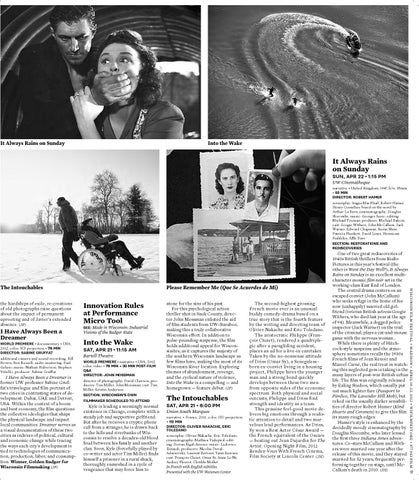 It Always Rains on Sunday

the hardships of exile; re-creations of old photographs raise questions about the impact of permanent uprooting and of Javier’s extended absence. (JP)

I Have Always Been a Dreamer is former UW professor Sabine Gruffat’s travelogue and ﬁlm portrait of two cities in contrasting states of development: Dubai, UAE and Detroit, USA. Within the context of a boom and bust economy, the ﬁlm questions the collective ideologies that shape the physical landscape and impact local communities. Dreamer serves as a visual documentation of these two cities as indexes of political, cultural and economic change while tracing the ways each city’s development is tied to technologies of communication, production, labor, and consumption. Winner, Golden Badger for Wisconsin Filmmaking (JP)

Innovation Rules at Performance Micro Tool SEE: Made in Wisconsin: Industrial Visions of the Badger State

Kyle is leading a seemingly normal existence in Chicago, complete with a steady job and supportive girlfriend. But after he receives a cryptic phone call from a stranger, he is drawn back to the hills and riverbanks of Wisconsin to resolve a decades-old blood feud between his family and another clan. Soon, Kyle (forcefully played by co-writer and actor Tim Miller) ﬁnds himself a prisoner in a rural shack, thoroughly enmeshed in a cycle of vengeance that may force him to

atone for the sins of his past. For this psychological action thriller shot in Sauk County, director John Mossman enlisted the aid of ﬁlm students from UW–Baraboo, making this a truly collaborative Wisconsin effort. In addition to pulse-pounding suspense, the ﬁlm holds additional appeal for Wisconsinites, as it captures the majesty of the southern Wisconsin landscape as few ﬁlms have, making the most of its Wisconsin River location. Exploring themes of abandonment, revenge, and the cyclical nature of violence, Into the Wake is a compelling — and homegrown — feature debut. (JP)

The second-highest grossing French movie ever is an unusual buddy comedy-drama based on a true story that is the fourth feature by the writing and directing team of Olivier Nakache and Eric Toledano. The aristocratic Philippe (François Cluzet), rendered a quadriplegic after a paragliding accident, places an ad for a live-in caretaker. Taken by the no-nonsense attitude of Driss (Omar Sy), a Senegaleseborn ex-convict living in a housing project, Philippe hires the younger man and a strong bond quickly develops between these two men from opposite sides of the economic spectrum. Both physical and social outcasts, Philippe and Driss find strength and identity as a team. This genuine feel-good movie delivers big emotions through a realistic attention to detail and two marvelous lead performances. As Driss, Sy won a Best Actor César Award — the French equivalent of the Oscars — beating out Jean Dujardin for The Artist. Opening Night Film, 2012 Rendez-Vous With French Cinema, Film Society at Lincoln Center. (JH)

One of two great rediscoveries of 1940s British thrillers from Rialto Pictures in this year’s festival (the other is Went the Day Well?), It Always Rains on Sunday is an excellent multicharacter mosaic ﬁlm noir set in the working-class East End of London. The central drama centers on an escaped convict (John McCallum) who seeks refuge in the home of his now (unhappily) married old girlfriend (veteran British actress Googie Withers, who died last year at the age of 94). Meanwhile, a dogged police inspector (Jack Warner) on the trail of the criminal, plays a cat-and-mouse game with the nervous woman… While there is plenty of Hitchcock-style suspense and the atmosphere sometimes recalls the 1930s French ﬁlms of Jean Renoir and Marcel Carné, the real treat in watching this neglected gem is taking in the many layers of post-war British urban life. The ﬁlm was originally released by Ealing Studios, which usually put out much lighter fare (Passport to Pimlico, The Lavender Hill Mob), but relied on the usually darker sensibilities of director Robert Hamer (Kind Hearts and Coronets) to give this ﬁlm its many rough edges. Hamer’s style is enhanced by the decidedly moody cinematography by Douglas Slocombe, who later lensed the ﬁrst three Indiana Jones adventures. Co-stars McCallum and Withers were married one year after the release of this movie, and they stayed married for 52 years, frequently performing together on stage, until McCallum’s death in 2010. (JH) 17