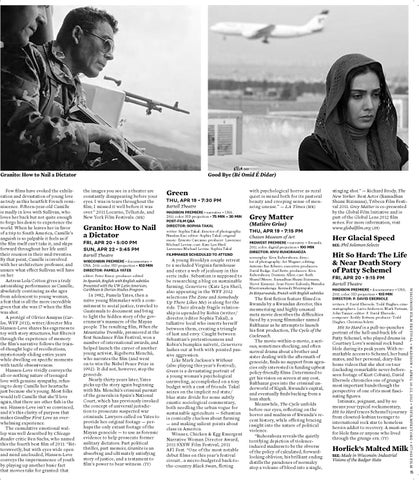 Granito: How to Nail a Dictator the images you see in a theater are constantly disappearing before your eyes. I was in tears throughout the ﬁlm; I missed it well before it was over.” 2011 Locarno, Telluride, and New York Film Festivals. (MK)

In 1982, Pamela Yates, then a naïve young ﬁlmmaker with a commitment to social justice, traveled to Guatemala to document and bring to light the hidden story of the government’s massacre of the Mayan people. The resulting ﬁlm, When the Mountains Tremble, premiered at the ﬁrst Sundance Film Festival, won a number of international awards, and helped launch the career of another young activist, Rigoberta Menchú, who narrates the ﬁlm (and went on to win the Nobel Peace Prize in 1992). It did not, however, stop the genocide. Nearly thirty years later, Yates picks up the story again beginning with Ms. Menchú’s criminal pursuit of the generals in Spain’s National Court, which has previously invoked the concept of universal jurisdiction to prosecute suspected war criminals. Lawyers called on Yates to provide her original footage — perhaps the only extant footage of the Mayan genocide — to use as forensic evidence to help prosecute former military dictators. Part political thriller, part memoir, Granito is an absorbing and ultimately satisfying story of justice, and a testament to ﬁlm’s power to bear witness. (TY)

A young Brooklyn couple retreat to a secluded Virginia farmhouse and enter a web of jealousy in this eerie indie. Sebastian is supposed to be researching a blog on sustainable farming; Genevieve (Kate Lyn Sheil, also appearing in the WFF 2012 selections The Zone and Somebody Up There Likes Me) is along for the ride. Their already fragile relationship is upended by Robin (writer/ director/editor Sophia Takal), a talkative local who inserts herself between them, creating a triangle of lust and envy. Caught between Sebastian’s pretentiousness and Robin’s bumpkin naïveté, Genevieve lashes out at both with pointed passive aggression. Like Mark Jackson’s Without (also playing this year’s Festival), Green is a devastating portrait of a young woman’s psychological unraveling, accomplished on a tiny budget with a cast of friends. Takal seizes on the implicit red state/ blue state divide for some subtly caustic sociological commentary, both needling the urban vogue for sustainable agriculture — Sebastian is comically clueless about farming — and making salient points about class in America. Winner, Chicken &amp; Egg Emergent Narrative Woman Director Award, 2011 SXSW Film Festival, 2011 AFI Fest. “One of the most notable debut films on this year’s festival circuit…a micro-budgeted back-tothe-country Black Swan, flirting

with psychological horror as rural quiet is mined both for its pastoral beauty and creeping sense of menacing unease.” — LA Times (MK)

The ﬁrst ﬁction feature ﬁlmed in Rwanda by a Rwandan director, this mesmerizing and highly unusual meta movie describes the difﬁculties faced by a young ﬁlmmaker named Balthazar as he attempts to launch his ﬁrst production, The Cycle of the Cockroach. The movie-within-a-movie, a serious, sometimes shocking, and often surreal drama about a brother and sister dealing with the aftermath of genocide, ﬁnds no support from agencies only interested in funding upbeat policy-friendly ﬁlms. Determined to get his vision on screen at any cost, Balthazar goes into the criminal underworld of Kigali, Rwanda’s capital, and eventually ﬁnds backing from a loan shark. Meanwhile, The Cycle unfolds before our eyes, reﬂecting on the horror and madness of Rwanda’s recent history, while offering bracing insight into the nature of political violence. “Ruhorahoza reveals the quietly terrifying depiction of violenceinduced madness to be the obverse of the policy of calculated, forwardlooking oblivion; his brilliant ending distills the paradoxes of normalcy atop a volcano of blood into a single,

Hit So Hard is a pull-no-punches portrait of the hell-and-back life of Patty Schemel, who played drums in Courtney Love’s seminal rock band Hole during its peak years. With remarkable access to Schemel, her band mates, and her personal, diary-like home videos that she shot on tour (including remarkable never-beforeseen footage of Kurt Cobain), David Ebersole chronicles one of grunge’s most important bands though the perspective of one of its most fascinating ﬁgures. Intimate, poignant, and by no means your typical rockumentary, Hit So Hard traces Schemel’s journey from closeted-lesbian teenager to international rock star to homeless heroin addict to recovery. A must-see for Hole fans or anyone who lived through the grunge era. (TY)

Horlick’s Malted Milk SEE: Made in Wisconsin: Industrial Visions of the Badger State

Few ﬁlms have evoked the exhilaration and devastation of young love as truly as this heartfelt French reminiscence. Fifteen-year-old Camille is madly in love with Sullivan, who loves her back but not quite enough to forgo his desire to experience the world. When he leaves her in favor of a trip to South America, Camille’s anguish is so palpable it feels as if the ﬁlm itself can’t take it, and skips forward throughout her life until their reunion in their mid-twenties. By that point, Camille is involved with her architecture professor, and unsure what effect Sullivan will have on her. Actress Lola Créton gives a truly astonishing performance as Camille, absolutely convincing as she ages from adolescent to young woman, a feat that is all the more incredible given that she was 17 when the ﬁlm was shot. A protégé of Olivier Assayas (Carlos, WFF 2011), writer/director Mia Hansen-Løve shares his eagerness to toy with story structures, but ﬁlters it through the experience of memory: the ﬁlm’s narrative follows the trainof-thought logic of recollections, mysteriously eliding entire years while dwelling on speciﬁc moments with tactile obsessiveness. Hansen-Løve vividly conveys the all-or-nothing nature of teenaged love with genuine sympathy, refusing to deny Camille her heartache just because she’s young. Most folks would tell Camille that she’ll love again, that there are other ﬁsh in the sea. Hansen-Løve isn’t so convinced, and it’s this clarity of purpose that makes Goodbye First Love an overwhelming experience. The cumulative emotional wallop was well described by Chicago Reader critic Ben Sachs, who named this the fourth best ﬁlm of 2011: “Bittersweetly, but with eyes wide open and mind unclouded, Hansen-Løve conveys the impermanence of youth by playing up another basic fact that movies take for granted: that