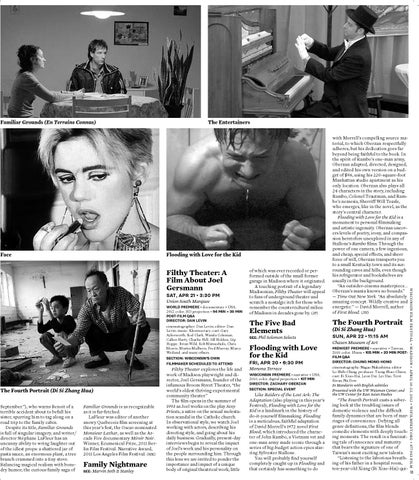 Flooding with Love for the Kid

The Fourth Portrait (Di Si Zhang Hua) September.”), who warns Benoit of a terrible accident about to befall his sister, spurring him to tag along on a road trip to the family cabin. Despite its title, Familiar Grounds is full of singular imagery, and writer/ director Stéphane LaFleur has an uncanny ability to wring laughter out of the idlest props: a shattered jar of pasta sauce, an enormous plant, a tree branch crammed into a tiny stove. Balancing magical realism with bonedry humor, the curious family saga of

Filthy Theater explores the life and work of Madison playwright and director, Joel Gersmann, founder of the infamous Broom Street Theater, “the world’s oldest thriving experimental community theater.” The ﬁlm opens in the summer of 1993 as Joel works on the play Sexy Priests, a satire on the sexual molestation scandal in the Catholic church. In observational style, we watch Joel working with actors, describing his directing style, and going about his daily business. Gradually, present-day interviews begin to reveal the impact of Joel’s work and his personality on the people surrounding him. Through this lens we are invited to ponder the importance and impact of a unique body of original theatrical work, little

of which was ever recorded or performed outside of the small former garage in Madison where it originated. A touching portrait of a legendary Madisonian, Filthy Theater will appeal to fans of underground theater and scratch a nostalgic itch for those who remember the countercultural milieu of Madison in decades gone by. (JP)

Like Raiders of the Lost Ark: The Adaptation (also playing in this year’s Festival), Flooding with Love for the Kid is a landmark in the history of do-it-yourself ﬁlmmaking. Flooding is a meticulous, faithful adaptation of David Morrell’s 1972 novel First Blood, which introduced the character of John Rambo, a Vietnam vet and one-man army made iconic through a series of big-budget action epics starring Sylvester Stallone. You will probably ﬁnd yourself completely caught up in Flooding and that certainly has something to do

“The Fourth Portrait casts a sobering look at the troubling issues of domestic violence and the difﬁcult family dynamics that are born of marriages of convenience. Defying all genre deﬁnitions, the ﬁlm blends comedic elements with deeply touching moments. The result is a fascinating tale of innocence and maturity that bears the signature of one of Taiwan’s most exciting new talents. “Listening to the laborious breathing of his father in a hospital room, ten-year-old Xiang (Bi Xiao-Hai) qui-

with Morrell’s compelling source material, to which Oberzan respectfully adheres, but his dedication goes far beyond being faithful to the book. In the spirit of Rambo’s one-man army, Oberzan adapted, directed, designed, and edited his own version on a budget of $96, using his 220-square-foot Manhattan studio apartment as his only location. Oberzan also plays all 24 characters in the story, including Rambo, Colonel Trautman, and Rambo’s nemesis, Sherriff Will Teasle, who emerges, like in the novel, as the story’s central character. Flooding with Love for the Kid is a monument to personal ﬁlmmaking and artistic ingenuity. Oberzan uncovers levels of poetry, irony, and compassion heretofore unexplored in any of Stallone’s Rambo ﬁlms. Through the power of one camera, a few ingenious, and cheap, special effects, and sheer force of will, Oberzan transports you to a small Kentucky town and its surrounding caves and hills, even though his refrigerator and bookshelves are usually in the background. “An outsider-cinema masterpiece... Oberzan’s mania knows no bounds.” — Time Out New York. “An absolutely amazing concept. Wildly creative and energetic.” — David Morrell, author of First Blood. (JH)