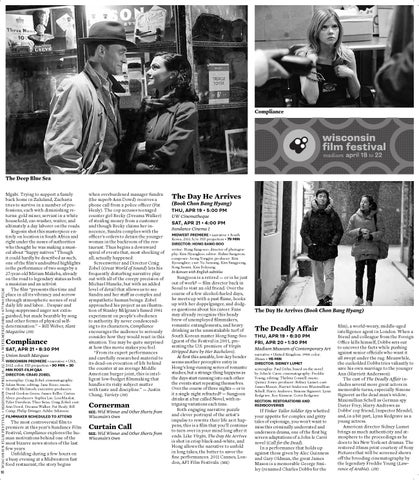 Mgabi. Trying to support a family back home in Zululand, Zacharia tries to survive in a number of professions, each with diminishing returns: gold miner, servant in a white household, car-washer, waiter, and ultimately a day laborer on the roads. Rogosin shot this masterpiece entirely on location in South Africa and right under the noses of authorities who thought he was making a musical about “happy natives.” Though it could hardly be described as such, one of the ﬁlm’s undoubted highlights is the performance of two songs by a 27-year-old Miriam Makeba, already on the road to legendary status as both a musician and an activist. The ﬁlm “presents this time and place in all its vibrancy and sorrow through atmospheric scenes of real daily life and labor... Despair and long-suppressed anger not extinguished, but made bearable by song and other forms of physical selfdetermination.” – Bill Weber, Slant Magazine (JH)

The most controversial ﬁlm to premiere at this year’s Sundance Film Festival, Compliance explores the human motivations behind one of the most bizarre news stories of the last few years. Unfolding during a few hours on a busy evening at a Midwestern fast food restaurant, the story begins

when overburdened manager Sandra (the superb Ann Dowd) receives a phone call from a police ofﬁcer (Pat Healy). The cop accuses teenaged counter girl Becky (Dreama Walker) of stealing money from a customer and though Becky claims her innocence, Sandra complies with the ofﬁcer’s orders to detain the younger woman in the backroom of the restaurant. Thus begins a downward spiral of events that, most shocking of all, actually happened. Screenwriter and Director Craig Zobel (Great World of Sound) lets his frequently disturbing narrative play out with all of the creepy precision of Michael Haneke, but with an added level of detail that allows us to see Sandra and her staff as complex and sympathetic human beings. Zobel approached his project as an illustration of Stanley Milgram’s famed 1961 experiment on people’s obedience to authority. By never condescending to its characters, Compliance encourages the audience to seriously consider how they would react in this situation. You may be quite surprised at how this movie makes you feel. “From its expert performances and carefully researched material to its dead-on evocation of life behind the counter at an average Middle American burger joint, this is intelligent low-budget ﬁlmmaking that handles its risky subject matter with taste and discipline.” — Justin Chang, Variety (JH)

Cornerman SEE: Wid Winner and Other Shorts from Wisconsin’s Own

Curtain Call SEE: Wid Winner and Other Shorts from Wisconsin’s Own

Sungjoon is a retired — or is he just out of work? — ﬁlm director back in Seoul to visit an old friend. Over the course of a few alcohol-fueled days, he meets up with a past ﬂame, hooks up with her doppelganger, and dodges questions about his career. Fans may already recognize this heady brew of unemployed ﬁlmmakers, romantic entanglements, and heavy drinking as the unmistakable turf of South Korean master Hong Sang-Soo (guest of the Festival in 2001, presenting the U.S. premiere of Virgin Stripped Bare by Her Bachelors). At ﬁrst this amiable, low-key bender seems another perceptive entry in Hong’s long-running series of romantic studies, but a strange thing happens as the days start running into each other: the events start repeating themselves. Over the course of three nights — or is it a single night refracted? — Sungjoon drinks at a bar called Novel, with intriguing variations each time. Both engaging narrative puzzle and clever portrayal of the artist’s impulse to rewrite their life as it happens, this is a ﬁlm that you’ll continue to turn over in your mind long after it ends. Like Virgin, The Day He Arrives is shot in crisp black-and-white, and Hong allows the narrative to unfold in long takes, the better to savor the ﬁne performances. 2011 Cannes, London, AFI Film Festivals. (MK)

If Tinker Tailor Soldier Spy whetted your appetite for complex and gritty tales of espionage, you won’t want to miss this criminally underrated and underseen drama, one of the ﬁrst big screen adaptations of a John le Carré novel (Call for the Dead). In a performance that holds up against those given by Alec Guinness and Gary Oldman, the great James Mason is a memorable George Smiley (renamed Charles Dobbs for the

ﬁlm), a world-weary, middle-aged intelligence agent in London. When a friend and colleague from the Foreign Ofﬁce kills himself, Dobbs sets out to uncover the facts while pushing against senior ofﬁcials who want it all swept under the rug. Meanwhile, the cuckolded Dobbs tries valiantly to save his own marriage to the younger Ann (Harriett Andersson). The cast of The Deadly Affair includes several more great actors in memorable turns, especially Simone Signoret as the dead man’s widow; Maximillian Schell as German spy Dieter Frey; Harry Andrews as Dobbs’ cop friend, Inspector Mendel; and, in a bit part, Lynn Redgrave as a young actress. American director Sidney Lumet brings as much authenticity and atmosphere to the proceedings as he does to his New York-set dramas. The restored 35mm print courtesy of Sony Pictures that will be screened shows off the brooding cinematography by the legendary Freddie Young (Lawrence of Arabia). (JH)