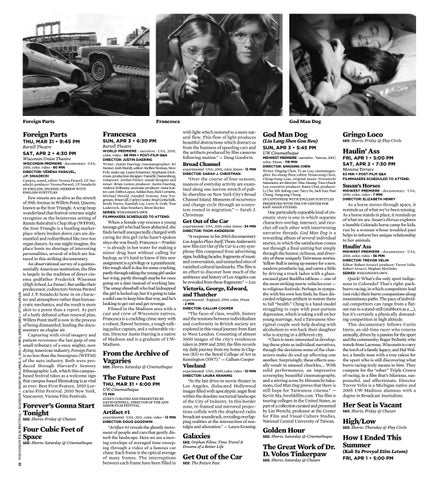 Few streets are as alive as the stretch of 39th Avenue in Willets Point, Queens, known as the Iron Triangle. A scrap heap wonderland that festival veterans might recognize as the boisterous setting of Ramin Bahrahni’s Chop Shop (WFF08), the Iron Triangle is a bustling marketplace where broken down cars are dismantled and redistributed like two-ton organ donors. As one might imagine, the place hosts no shortage of interesting personalities, several of which are featured in this striking documentary. An observational survey of a quintessentially American institution, the film is largely in the tradition of direct cinema godfather Frederick Wiseman (High School, La Danse). But unlike their predecessor, codirectors Verena Paravel and J. P. Sniadecki hone in on character and atmosphere rather than bureaucratic mechanics, and the result is more akin to a poem than a report. As part of a hotly debated urban renewal plan, Willets Point itself is now in the process of being dismantled, lending the documentary an elegiac air. Capturing with vivid imagery and patient reverence the last gasp of one small tributary of a once mighty, now dying American industry, Foreign Parts is no less than the Sweetgrass (WFF10) of the auto industry. Both were produced through Harvard’s Sensory Ethnographic Lab, which this campusbased festival takes as a welcome sign that campus-based filmmaking is as vital as ever. Best First Feature, 2010 Lorcarno Film Festival. 2010 New York, Vancouver, Vienna Film Festivals.

When a female cop rescues a young teenage girl who had been abducted, she finds herself unexpectedly charged with caring for this girl (who hasn’t spoken since she was freed). Francesca — Frankie — is already in hot water for making a minor drug bust without calling for backup, so it’s hard to know if this new assignment is a privilege or a punishment. Her tough shell is due for some cracking, partly through taking the young girl under her wing, partly through maybe for once going on a date instead of working late. The smug slimeball who had kidnapped the girl is locked up, but it’s going to take a solid case to keep him that way, and he’s looking to get out and get revenge. Filmed in the Madison area with a cast and crew of Wisconsin natives, Francesca is a crackling crime story with a robust, flawed heroine, a tough-talking police captain, and a vulnerable victim. Director Justin Daering is a native of Madison and is a graduate of UWMadison.

From the Archive of Vagaries

with light which restored to a more natural flow. This flow of light produces beautiful abstractions which distract us from the business of speeding cars and the artifacts produced by film cameras following motion.” — Doug Goodwin

“Over the course of four seasons, nuances of everyday activity are examined along one narrow stretch of public shoreline on New York City’s Broad Channel Island. Moments of recurrence and change cycle through an ecosystem rooted in migration.” — Sarah J. Christman

“A response to his 2003 documentary Los Angeles Plays Itself, Thom Andersen’s new film Get Out of the Car is a city symphony film composed from advertising signs, building facades, fragments of music and conversation, and unmarked sites of vanished cultural landmarks. The film is an effort to discover how much of the ambience and history of Los Angeles can be revealed from these fragments.” — Lux

“The faces of class, wealth, history and the tensions between individualism and conformity in British society are explored in this visual journey from East to West London. Consisting of almost 3600 images of the city’s residences taken in 2009 and 2010, the film records my daily journey from my home in Clapton (E5) to the Royal College of Art in Kensington (SW7).” — Callum Cooper

“Artifact #1 reveals the ghostly movement of people and cars that gently disturb the landscape. Here we see a moving envelope of averaged time sweeping through a video of a famous car chase. Each frame is the optical average of many frames. The interruptions between each frame have been filled in

“At the last drive-in movie theater in Los Angeles, dislocated Hollywood images filled with apocalyptic angst float within the desolate nocturnal landscape of the City of Industry. In this border zone, re-framed and mirrored projections collide with the displaced radio broadcast soundtrack, revealing overlapping realities at the intersection of nostalgia and alienation.” — Laura Kraning

Get Out of the Car SEE: The Future Past

One particularly enjoyable kind of cinematic story is one in which separate characters overlap, intersect, and ricochet off each other with intertwining narrative threads. God Man Dog is a rewarding album of several individual stories, in which the satisfaction comes not through a final uniting but simply through the humor, richness, and diversity of these uniquely Taiwanese stories. Yellow Bull is saving up money for a new, modern prosthetic leg, and earns a little by driving a truck laden with a glassencased giant Buddha tableau — one of the most striking movie vehicles ever — to religious festivals. Perhaps in sympathy with his own lost limb, he fixes discarded religious artifacts to restore them to full “health.” Ching is a hand-model struggling to cope with post-partum depression, which is taking a toll on her young marriage. And a Taiwanese Aboriginal couple seek help dealing with alcoholism to win back their daughter who is staying in a different city. “Chen is more interested in developing these plots as individual narratives, though the decisions some of the characters make do end up affecting one another. Surprisingly, these effects usually result in amused chuckles.... With solid performances, an impressive screenplay, beautiful cinematography, and a stirring score by Hiromichi Sakamoto, God Man Dog proves that there is still hope for Taiwanese cinema.” — Kevin Ma, lovehkfilm.com. This film is touring colleges in the United States, as part of a collection curated and presented by Lin Wenchi, professor at the Center for Film and Visual Culture Studies, National Central University of Taiwan.

Quick! What’s the only sport indigenous to Colorado? That’s right: packburro racing, in which competitors lead (not ride) their burro companions along mountainous paths. The pace of individual competitors can range from a flatout run to a stand-still (stubborn as a __), but it’s certainly a physically demanding competition in high altitude. This documentary follows Curtis Imrie, an old-time racer who returns annually, driven by a passion for the sport and the community; Roger Pedretti, who travels from Lacrosse, Wisconsin to carry the torch of a family legacy; and Hal Walter, a family man with a true talent for the sport who is still discovering what burro racing truly means to him. They compete for the “other” Triple Crown of racing, in a film that’s hilarious, suspenseful, and affectionate. Director Trevor Velin is a Michigan native and 2005 UW-Madison alumnus with a degree in Broadcast Journalism.