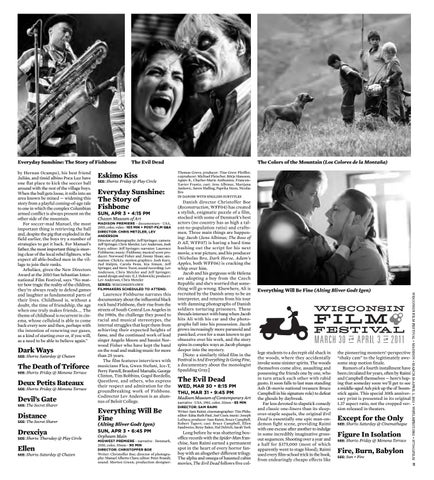 Everyday Sunshine: The Story of Fishbone

Laurence Fishburne narrates this documentary about the influential black rock band Fishbone, their rise from the streets of South Central Los Angeles in the 1980s, the challenge they posed to racial and musical stereotypes, the internal struggles that kept them from achieving their expected heights of fame, and the continued work of lead singer Angelo Moore and bassist Norwood Fisher who have kept the band on the road and making music for more than 25 years. The film features interviews with musicians Flea, Gwen Stefani, Ice-T, Perry Farrell, Branford Marsalis, George Clinton, Tim Robbins, Gogol Bordello, Questlove, and others, who express their respect and admiration for the groundbreaking work of Fishbone. Codirector Lev Anderson is an alumnus of Beloit College.

Danish director Christoffer Boe (Reconstruction, WFF04) has created a stylish, enigmatic puzzle of a film, stocked with some of Denmark’s best actors (no country has as high a talent-to-population ratio) and craftsmen. Three main things are happening: Jacob (Jens Albinus; The Boss of It All, WFF07) is having a hard time hashing out the script for his next movie, a war picture, and his producer (Nicholas Bro, Dark Horse, Adam’s Apples, both WFF06) is cracking the whip over him. Jacob and his gorgeous wife Helena are adopting a boy from the Czech Republic and she’s worried that something will go wrong. Elsewhere, Ali is recruited by the Danish army to be an interpreter, and returns from his tour with damning photographs of Danish soldiers torturing prisoners. These threads intersect with bang when Jacob hits Ali with his car and the photographs fall into his possession. Jacob grows increasingly more paranoid and panicked, even for a man known to get obsessive over his work, and the story spins in complex ways as Jacob plunges deeper into the mystery. [Note: a similarly titled film in the Festival is And Everything Is Going Fine, a documentary about the monologist Spaulding Gray.]

Long before he was shattering boxoffice records with the Spider-Man franchise, Sam Raimi earned a permanent spot in the heart of every horror fanboy with an altogether different trilogy. The alpha and omega of haunted cabin movies, The Evil Dead follows five col-

Everything Will Be Fine (Alting Bliver Godt Igen)

lege students to a decrepit old shack in the woods, where they accidentally invoke some sinister spirits. The woods themselves come alive, assaulting and possessing the friends one by one, who in turn attack each other with rabid gusto. It soon falls to last man standing Ash (B-movie national treasure Bruce Campbell in his signature role) to defeat the ghouls by daybreak. Far less devoted to slapstick comedy and classic one-liners than its sleepover-staple sequels, the original Evil Dead is essentially one epic man-ondemon fight scene, providing Raimi with one excuse after another to indulge in some incredibly imaginative grossout sequences. Shooting over a year and a half for $375,000 (most of which apparently went to stage blood), Raimi used every film-school trick in the book, from endearingly cheapo effects like

the pioneering monsters’-perspective “shaky cam” to the legitimately awesome stop motion finale. Rumors of a fourth installment have been circulated for years, often by Raimi and Campbell themselves — here’s hoping that someday soon we’ll get to see a middle-aged Ash pick up the ol’ boomstick again. This special 30th anniversary print is presented in its original 1.37 aspect ratio, not the cropped version released in theaters.

Except for the Only SEE: Shorts: Saturday @ Cinematheque

by Hernan Ocampo), his best friend Julián, and timid albino Poca Luz have one flat place to kick the soccer ball around with the rest of the village boys. When the ball gets loose, it rolls into an area known be mined — widening this story from a playful coming-of-age tale to one in which the complex Columbian armed conflict is always present on the other side of the mountain. For soccer-mad Manuel, the most important thing is retrieving the ball and, despite the pig that exploded in the field earlier, the boys try a number of strategies to get it back. For Manuel’s father, the most important thing is steering clear of the local rebel fighters, who expect all able-bodied men in the village to join their ranks. Arbeláez, given the New Directors Award at the 2010 San Sebastian International Film Festival, says “No matter how tragic the reality of the children, they’re always ready to defend games and laughter as fundamental parts of their lives. Childhood is, without a doubt, the time of friendship, the age when one truly makes friends.... The theme of childhood is recurrent in cinema, whose celluloid is able to come back every now and then, perhaps with the intention of renewing our gazes, as a kind of starting over or, if you will, as a need to be able to believe again.”