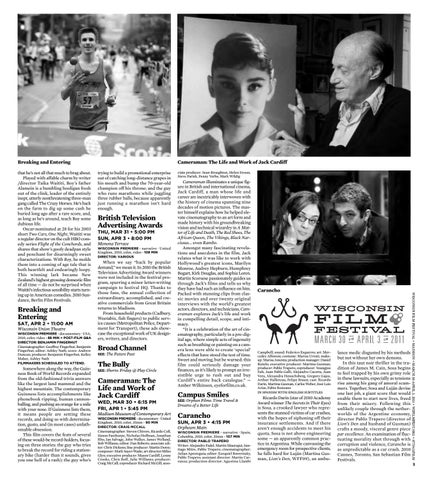 trying to build a promotional enterprise out of catching long-distance grapes in his mouth and bump the 70-year-old champion off his throne; and the guy who runs marathons while juggling three rubber balls, because apparently just running a marathon isn’t hard enough.

When we say “back by popular demand,” we mean it. In 2010 the British Television Advertising Award winners were not included in the festival program, spurring a minor letter-writing campaign to festival HQ. Thanks to those fans, the annual collection of extraordinary, accomplished, and creative commercials from Great Britain returns to Madison. From household products (Cadbury, Weetabix, fish fingers) to public service causes (Metropolitan Police, Department for Transport), these ads showcase the exceptional work of UK designers, writers, and directors.

Somewhere along the way, the Guinness Book of World Records expanded from the old-fashioned trivia answers like the largest land mammal and the highest mountain. The contemporary Guinness lists accomplishments like phonebook ripping, human cannonballing, and pushing an orange for a mile with your nose. If Guinness lists them, it means people are setting these records, and doing so with determination, gusto, and (in most cases) unfathomable obsession. This film covers the feats of several of these would-be record-holders, focusing on three stories: the guy who tries to break the record for riding a stationary bike (harder than it sounds, gives you one hell of a rash); the guy who’s

SEE: The Future Past

Cameraman: The Life and Work of Jack Cardiff

Cameraman illuminates a unique figure in British and international cinema, Jack Cardiff, a man whose life and career are inextricably interwoven with the history of cinema spanning nine decades of motion pictures. The master himself explains how he helped elevate cinematography to an art form and made history with his groundbreaking vision and technical wizardry in A Matter of Life and Death, The Red Shoes, The African Queen, The Vikings, Black Narcissus... even Rambo. Amongst many fascinating revelations and anecdotes in the film, Jack relates what it was like to work with Hollywood’s greatest icons, Marilyn Monroe, Audrey Hepburn, Humphrey Bogart, Kirk Douglas, and Sophia Loren. Martin Scorsese passionately guides us through Jack’s films and tells us why they have had such an influence on him. Packed with stunning clips from classic movies and over twenty original interviews with the world’s greatest actors, directors, and technicians, Cameraman explores Jack’s life and work in compelling detail, scope, and intimacy. “It is a celebration of the art of cinematography, particularly in a pre-digital age, where simple acts of ingenuity such as breathing or painting on a camera lens were able to create ‘special’ effects that have stood the test of time. Sweet and moving, but be warned: this film could seriously damage your finances, as it’s likely to prompt an irresistible urge to rush out and buy Cardiff ’s entire back catalogue.” — Amber Wilkinson, eyeforfilm.co.uk.

Ricardo Darín (star of 2010 Academy Award winner The Secrets in Their Eyes) is Sosa, a crooked lawyer who represents the stunned victims of car crashes, with the hopes of siphoning off their insurance settlements. And if there aren’t enough accidents to meet his quota, Sosa is not above engineering some — an apparently common practice in Argentina. While canvassing the emergency room for prospective clients, he falls hard for Luján (Martina Gusman, Lion’s Den, WFF09), an ambu-

lance medic disgusted by his methods but not without her own demons. In this taut noir thriller in the tradition of James M. Cain, Sosa begins to feel trapped by his own grimy role in these lawsuits, especially as tensions rise among his gang of amoral scammers. Together, Sosa and Luján devise one last job, a giant score that would enable them to start new lives, freed from their misery. Following this unlikely couple through the netherworlds of the Argentine economy, director Pablo Trapero (director of Lion’s Den and husband of Gusman) crafts a moody, visceral genre piece par excellence. An examination of fluctuating morality shot through with corruption and violence, Carancho is as unpredictable as a car crash. 2010 Cannes, Toronto, San Sebastian Film Festivals.

that he’s not all that much to brag about. Played with affable charm by writer /director Taika Waititi, Boy’s father Alamein is a bumbling hooligan fresh out of the clink, leader of the entirely inept, utterly nonthreatening three-man gang called The Crazy Horses. He’s back on the farm to dig up some cash he buried long ago after a rare score, and, as long as he’s around, teach Boy some dubious life. Oscar-nominated at 28 for his 2003 short Two Cars, One Night, Waititi was a regular director on the cult HBO comedy series Flight of the Conchords, and shares that show’s goofy deadpan style and penchant for disarmingly sweet characterizations. With Boy, he molds them into a coming of age tale that is both heartfelt and endearingly loopy. This winning lark became New Zealand’s highest grossing domestic film of all time — do not be surprised when Waititi’s infectious sensibility starts turning up in American comedies. 2010 Sundance, Berlin Film Festivals.

Cameraman: The Life and Work of Jack Cardiff