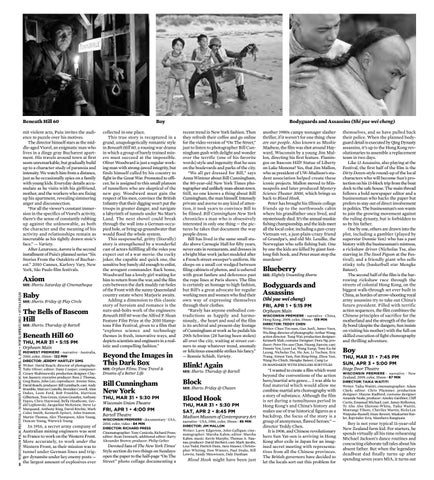 Beneath Hill 60 mit violent acts, Puiu invites the audience to puzzle over his motives. The director himself stars as the middle-aged Viorel, an enigmatic man who lives in a dingy gray Bucharest apartment. His travels around town at first seem unremarkable, but gradually build up to a character study of paranoia and intensity. We watch him from a distance, just as he occasionally spies on a family with young kids. Everyday details accumulate as he visits with his girlfriend, mother, and the workers who are fixing up his apartment, revealing simmering anger and disconnection. “For all the viewer’s constant immersion in the specifics of Viorel’s activity, there’s the sense of constantly rubbing up against the unknowable, as both the character and the meaning of his activity and relationships remain as inscrutable as his tightly drawn stoic’s face.” — Variety. After Lazarescu, Aurora is the second installment of Puiu’s planned series “Six Stories From the Outskirts of Bucharest.” 2010 Cannes, Karlovy Vary, New York, São Paulo film festivals.

In 1916, a secret army company of Australian mining engineers was sent to France to work on the Western Front. More accurately, to work under the Western Front, as their mission was to tunnel under German lines and trigger dynamite under key enemy posts — the largest amount of explosives ever

Boy collected in one place. This true story is recaptured in a grand, unapologetically romantic style in Beneath Hill 60, a rousing war drama in which a group of barely trained miners must succeed at the impossible. Oliver Woodward is just a regular working man with strong-jawed integrity, but finds himself called by his country to fight in the Great War. Promoted to officer, he is assigned to this small platoon of tunnellers who are skeptical of the new guy. Woodward must gain the respect of his men, convince the British Infantry that their digging won’t put the troops in greater danger, and navigate a labyrinth of tunnels under No Man’s Land. The next shovel could break through the wall into a German-occupied hole, or bring up groundwater that would flood the whole system. This suspenseful, gritty (literally) story is strengthened by a wonderful cast of actors fulfilling all the roles you expect out of a war movie: the cocky joker, the capable and quick one, the sensitive boy barely old enough to enlist, the arrogant commander. Back home, Woodward has a lovely girl waiting for him to return from the war, and the film cuts between the dark muddy rat-holes of the Front with the sunny Queensland country estate where Marjorie awaits. Adding a dimension to this classic story of heroism and romance is the nuts-and-bolts work of the engineers: Beneath Hill 60 won the Alfred P. Sloan Feature Film Prize at the 2010 Hamptons Film Festival, given to a film that “explores science and technology themes in fresh, innovative ways, and depicts scientists and engineers in a realistic and compelling fashion.”

Beyond the Images in This Dark Box SEE: Orphan Films: Time Travel &amp;

Devoted fans of The New York Times’ Style section do two things on Sundays: open the paper to the half-page “On The Street” photo collage documenting a

Bodyguards and Assassins (Shi yue wei cheng) recent trend in New York fashion. Then they refresh their coffee and go online for the video version of “On The Street,” just to listen to photographer Bill Cunningham gush with delight and wonder over the terrific (one of his favorite words) style and ingenuity that he sees on the boulevards and parks of the city. “We all get dressed for Bill,” says Anna Wintour about Bill Cunningham, the 80-year-old New York Times photographer and unlikely man-about-town. Still, no one knows a thing about Bill Cunningham, the man himself. Intensely private and averse to any kind of attention, it took years to convince Bill to be filmed. Bill Cunningham New York chronicles a man who is obsessively interested in only one thing — the pictures he takes that document the way people dress. Bill has lived in the same small studio above Carnegie Hall for fifty years, never eats in restaurants, and dresses in a bright blue work jacket modeled after a French street-sweeper’s uniform. He sleeps on a small cot wedged between filing cabinets of photos, and is ushered with great fanfare and deference past the rope lines at Paris shows. The film is certainly an homage to high fashion, but Bill’s a great advocate for regular working men and women who find their own way of expressing themselves through their clothes. “Rarely has anyone embodied contradictions as happily and harmoniously... the heart and soul of the film is its archival and present-day footage of Cunningham at work as he pedals his 29th Schwinn (28 having been stolen) all over the city, waiting at street corners to snap whatever trend, anomaly or felicitous ensemble strikes his fancy.” — Ronnie Schieb, Variety.

another 1980s campy teenager slasher thriller, if it weren’t for one thing: these are our people. Also known as Muskie Madness, the film was shot around Hayward, Wisconsin by a young Jim Mallon, directing his first feature. Flamingos on Bascom Hill? Statue of Liberty on Lake Monona? Yes, that Jim Mallon, who as president of UW-Madison’s student association helped create these iconic projects. Mallon moved to Minneapolis and later produced Mystery Science Theater 3000, which brings us back to Blood Hook. Peter has brought his Illinois college friends up to the northwoods cabin where his grandfather once lived, and mysteriously died. It’s the annual muskie fishing championship, and the kids meet all the local color, including a gun-crazy Vietnam vet, a just-plain-crazy friend of Grandpa’s, and old Mr. Leudke, the Norwegian who sells fishing bait. One by one the kids are killed by giant footlong fish hook, and Peter must stop the murderer!

“I wanted to create a film which went beyond the conventions of the action hero/martial arts genre.... I was able to find material which would allow me combine martial arts choreography with a story of substance. Although the film is set during a tumultuous period in Hong Kong’s and China’s history and makes use of true historical figures as a backdrop, the focus of the story is a group of anonymous, flawed heroes.” — director Teddy Chen. It is 1906, and Chinese revolutionary hero Sun Yat-sen is arriving in Hong Kong after exile in Japan for an imagined secret meeting with representatives from all the Chinese provinces. The British governors have decided to let the locals sort out this problem for

themselves, and so have pulled back their police. When the planned bodyguard detail is executed by Qing Dynasty assassins, it’s up to the Hong Kong revolutionaries to assemble a replacement team in two days. Like 13 Assassins, also playing at the Festival, the first half of the film is the Dirty Dozen-style round-up of the local characters who will become Sun’s protection on his 13-block trip from the boat dock to the safe house. The main thread follows a bold newspaper editor and a businessman who backs the paper but prefers to stay out of direct involvement in politics. The businessman’s son wants to join the growing movement against the ruling dynasty, but is forbidden to so by his father. One by one, others are drawn into the plot, including a gambler (played by superstar Donnie Yen) who has a past history with the businessman’s mistress, a rickshaw driver (Nicholas Tse, also starring in The Stool Pigeon at the Festival), and a friendly giant who sells stinky tofu (basketball star Mengke Bateer). The second half of the film is the harrowing rickshaw race through the streets of colonial Hong Kong, on the biggest walk-through set ever built in China, as hordes of arrow-shooting royal army assassins try to take out China’s future president. Filled with terrific action sequences, the film combines the Chinese principles of sacrifice for the motherland and the strength of the family bond (despite the dangers, Sun insists on visiting his mother) with the full-on skilled execution of fight choreography and thrilling adventure.

Boy is not your typical 11-year-old New Zealand farm kid. For starters, he spends virtually all his time rehearsing Michael Jackson’s dance routines and concocting elaborate tall tales about his absent father. But when the legendary deadbeat dad finally turns up after spending seven years MIA, it turns out