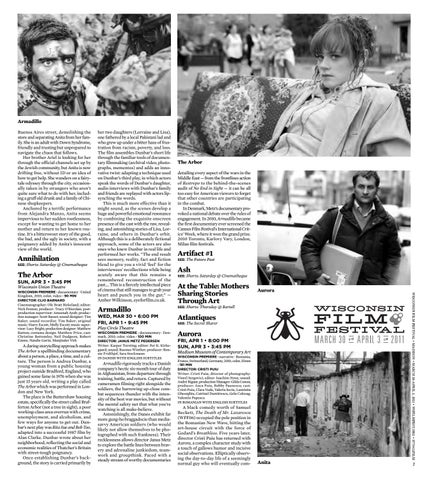 Armadillo Buenos Aires street, demolishing the store and separating Anita from her family. She is an adult with Down Syndrome, friendly and trusting but unprepared to navigate the chaos that follows. Her brother Ariel is looking for her through the official channels set up by the Jewish community, but Anita is now drifting free, without ID or an idea of how to get help. She wanders on a fairytale odyssey through the city, occasionally taken in by strangers who aren’t quite sure what to do with her, including a gruff old drunk and a family of Chinese shopkeepers. Anchored by a terrific performance from Alejandra Manzo, Anita seems impervious to her sudden rootlessness, except for wanting to get home to her mother and return to her known routine. It’s a bittersweet story of the good, the bad, and the ugly in society, with a poignancy added by Anita’s innocent view of the world.

A daring storytelling approach makes The Arbor a spellbinding documentary about a person, a place, a time, and a culture. The person is Andrea Dunbar, a young woman from a public housing project outside Bradford, England, who gained some fame in 1976 when she was just 15 years old, writing a play called The Arbor which was performed in London and New York. The place is the Buttershaw housing estate, specifically the street called Brafferton Arbor (not a tree in sight), a poor working-class area overrun with crime, unemployment, and alcoholism, and few ways for anyone to get out. Dunbar’s next play was Rita Sue and Bob Too, adapted into a successful 1987 film by Alan Clarke. Dunbar wrote about her neighborhood, reflecting the social and economic realities of Thatcher’s Britain with street-tough poignancy. Once establishing Dunbar’s background, the story is carried primarily by

The Arbor detailing every aspect of the wars in the Middle East — from the frontlines action of Restrepo to the behind-the-scenes audit of No End in Sight — it can be all too easy for American viewers to forget that other countries are participating in the combat. In Denmark, Metz’s documentary provoked a national debate over the rules of engagement. In 2010, Armadillo became the first documentary ever screened the Cannes Film Festival’s International Critics’ Week, where it won the grand prize. 2010 Toronto, Karlovy Vary, London, Milan film festivals.

Artifact #1 SEE: The Future Past

At the Table: Mothers Sharing Stories Through Art

Armadillo rigorously tracks a Danish company’s hectic six-month tour of duty in Afghanistan, from departure through training, battle, and return. Captured by cameramen filming right alongside the soldiers, the harrowing up-close combat sequences thunder with the intensity of the best war movies, but without the mental safety net that what you’re watching is all make-believe. Astonishingly, the Danes exhibit far more gung-ho braggadocio than mediasavvy American soldiers (who would likely not allow themselves to be photographed with such frankness). Their recklessness allows director Janus Metz to explore the battle lines between bravery and adrenaline junkiedom, teamwork and groupthink. Faced with a steady stream of worthy documentaries

A black comedy worth of Samuel Beckett, The Death of Mr. Lazarescu (WFF06) occupied the pole position in the Romanian New Wave, hitting the art-house circuit with the force of Godard’s Breathless. Five years later, director Cristi Puiu has returned with Aurora, a complex character study with a touch of gallows humor and incisive social observations. Elliptically observing the day-to-day life of a seemingly normal guy who will eventually com-

her two daughters (Lorraine and Lisa), one fathered by a local Pakistani lad and who grew up under a bitter haze of frustration from racism, poverty, and loss. The film assembles Dunbar’s short life through the familiar tools of documentary filmmaking (archival video, photographs, mementos) and adds an innovative twist: adapting a technique used on Dunbar’s third play, in which actors speak the words of Dunbar’s daughter, audio interviews with Dunbar’s family and friends are replayed with actors lipsynching the words. This is much more effective than it might sound, as the scenes develop a huge and powerful emotional resonance by combining the exquisite onscreen presence of the cast with the raw, revealing, and astonishing stories of Lisa, Lorraine, and others in Dunbar’s orbit. Although this is a deliberately fictional approach, some of the actors are also ones who knew Dunbar in real life and performed her works. “The end result sees memory, reality, fact and fiction blend to give you a vivid ‘feel’ for the interviewees’ recollections while being acutely aware that this remains a remembered reconstruction of the past.... This is a fiercely intellectual piece of cinema that still manages to grab your heart and punch you in the gut.” — Amber Wilkinson, eyeforfilm.co.uk.