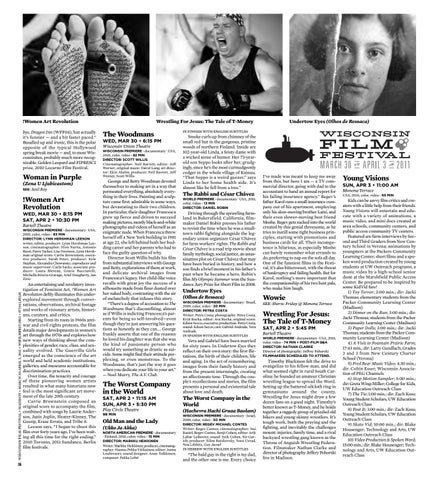 !Women Art Revolution bye, Dragon Inn (WFF04), but actually it’s funnier — and a bit faster paced.” Bundled up and ironic, this is the polar opposite of the typical Hollywood spring break movie — and, to most Wisconsinites, probably much more recognizable. Golden Leopard and FIPRESCI prize, 2010 Locarno Film Festival.

An entertaining and revelatory investigation of Feminist Art, !Women Art Revolution deftly illuminates this underexplored movement through conversations, observations, archival footage and works of visionary artists, historians, curators, and critics. Starting from its roots in 1960s antiwar and civil rights protests, the film details major developments in women’s art through the 1970s and explores how new ways of thinking about the complexities of gender, race, class, and sexuality evolved. The Guerrilla Girls emerged as the conscience of the art world and held academic institutions, galleries, and museums accountable for discrimination practices. Over time, the tenacity and courage of these pioneering women artists resulted in what many historians now feel is the most significant art movement of the late 20th century. Carrie Brownstein composed an original score to accompany the film, combined with songs by Laurie Anderson, Janis Joplin, Sleater-Kinney, The Gossip, Erase Errata, and Tribe 8. Leeson says, “I began to shoot this film over forty years ago. I’ve been waiting all this time for the right ending.” 2010 Toronto, 2011 Sundance, Berlin film festivals.

Wrestling For Jesus: The Tale of T-Money

George and Betty Woodman devoted themselves to making art in a way that permeated everything, absolutely everything in their lives. Painting and sculpture came first: admirable in some ways, but devastating to their two children. In particular, their daughter Francesca grew up fierce and driven to succeed making pictures, mostly black-and-white photographs and videos of herself as an enigmatic nude. When Francesca threw herself off a New York building in 1981 at age 22, she left behind both her budding career and her parents who had to face the guilty question of why. Director Scott Willis builds his film from substantial interviews with George and Betty, explorations of them at work, and delicate archival images from Francesca’s legacy. Her child-like voice recalls with great joy the success of a silhouette made from flour dusted over her naked body, contrasting with the air of melancholy that infuses this story. “There’s a degree of accusation to The Woodmans that’s discomfiting, almost as if Willis is indicting Francesca’s parents for being so self-involved—even though they’re just answering his questions as honestly as they can.... George frankly asserts that one of the reasons he loved his daughter was that she was the kind of passionate person who would try something as drastic as suicide. Some might find their attitude perplexing, or even monstrous. To the Woodmans, that’s just the way it goes when you dedicate your life to your art.” — Noel Murry, The A.V. Club.

The Worst Company in the World

IN FINNISH WITH ENGLISH SUBTITLES

Smoke curls up from chimney of the small red hut in the gorgeous, pristine woods of northern Finland. Inside are 102-year-old Linda, a feisty dame with a wicked sense of humor. Her 73-yearold son Seppo looks after her, grudgingly, since he’s the most curmudgeonly codger in the whole village of Kainuu. “That Seppo is a weird geezer,” says Linda to her home health aide. It’s almost like he fell from a tree.”

Driving through the sprawling farmland in Bakersfield, California, filmmaker Daniel Robin presses his father to revisit the time when he was a smalltown rabbi fighting alongside the legendary union organizer César Chávez for farm workers’ rights. The Rabbi and César Chávez is a road trip movie about family mythology, social justice, an assassination plot on César Chávez that may have been buried in history, and how a son finds a brief moment in his father’s past when he became a hero. Robin’s film My Olympic Summer won the Sundance Jury Prize for Short Film in 2008.

Vera and Gabriel have been married for sixty years. In Undertow Eyes they reflect on their own story: the first flirtations, the birth of their children, life and aging. In the act of remembering, images from their family history and from the present intermingle, creating an affectionate tone. Through the couple’s recollections and stories, the film presents a personal and existential tale about love and death.

The Worst Company in the World

“The bald guy in the right is my dad, and the other one is me. Every choice

I’ve made was meant to keep me away from this, but here I am — a TV commercial director, going with dad to the accountant to hand an annual report for his failing insurance agency.” Regev’s father Karol runs a small insurance company out of his apartment, employing only his slow-moving brother Latzi, and their even slower-moving best friend Moshe. Regev gets sucked into the world created by this genial threesome, as he tries to instill some tight business principles, starting with promotions and business cards for all. Their incompetence is hilarious, as especially Moshe can barely remember what errands to do, preferring to nap on the sofa all day. One of the funniest films in the Festival, it’s also bittersweet, with the threat of bankruptcy and failing health. But for Karol, nothing’s more important that the companionship of his two best pals, who make him laugh.

Timothy Blackmon felt the drive to evangelize to his fellow man, and did what seemed right in rural South Carolina: he founded an amateur Christian wrestling league to spread the Word. Setting up the battered oilcloth ring in gymnasiums around the county, Wrestling for Jesus might draw a few dozen fans on a good night. Timothy’s better known as T-Money, and he holds together a raggedy group of grizzled old bikers and young skinny wrestlers. It’s tough work, both the praying and the fighting, and inevitably the challenges mount: injuries, family time, and a rival backyard wrestling gang known as the Throne of Anguish Wrestling Federation. Filmmaker Nathan Clarke and director of photography Jeffery Pohorski live in Madison.