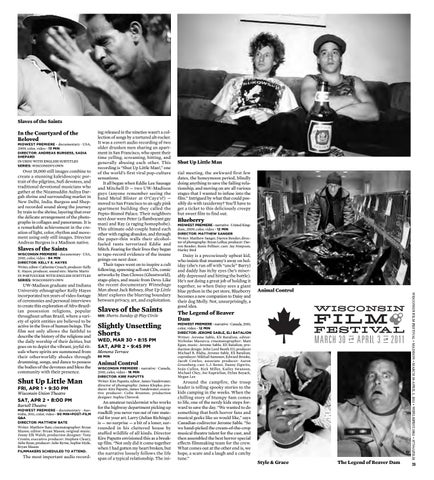 Slaves of the Saints

Over 18,000 still images combine to create a stunning kaleidoscopic portrait of the pilgrims, Sufi devotees, and traditional devotional musicians who gather at the Nizamuddin Auliya Dargah shrine and surrounding market in New Delhi, India. Burgess and Shepard recorded sound along the journey by train to the shrine, layering that over the delicate arrangement of the photographs in collages and panoramas. It is a remarkable achievement in the creation of light, color, rhythm and movement using only still images. Director Andreas Burgess is a Madison native.

The most important audio record-

An amateur taxidermist who works for the highway department picking up roadkill: you never run out of raw material for your art. Larry (Julian Richings) is — no surprise — a bit of a loner, surrounded in his cluttered house by stuffed wildlife of all kinds. Director Kire Paputts envisioned this as a breakup film. “Not only did it come together when I had gotten my heart broken, but the narrative loosely follows the life span of a typical relationship. The ini-

Shut Up Little Man tial meeting, the awkward first few dates, the honeymoon period, blindly doing anything to save the failing relationship, and moving on are all various stages that I wanted to infuse into the film.” Intrigued by what that could possibly do with taxidermy? You’ll have to get a ticket to this deliciously creepy but sweet film to find out.

Daisy is a precociously upbeat kid, who insists that mummy’s away on holiday (she’s run off with “uncle” Barry) and daddy has itchy eyes (he’s miserably depressed and hitting the bottle). He’s not doing a great job of holding it together, so when Daisy sees a giant blue python in the pet store, Blueberry becomes a new companion to Daisy and their dog Molly. Not, unsurprisingly, a good idea.

UW-Madison graduate and Indiana University ethnographer Kelly Hayes incorporated ten years of video footage of ceremonies and personal interviews to create this exploration of Afro-Brazilian possession religions, popular throughout urban Brazil, where a variety of spirit entities are believed to be active in the lives of human beings. The film not only allows the faithful to describe the history of the religions and the daily worship of their deities, but goes on to depict the vibrant, joyful rituals where spirits are summoned from their otherworldly abodes through drumming, songs, and dance to possess the bodies of the devotees and bless the community with their presence.

ing released in the nineties wasn’t a collection of songs by a tortured alt-rocker. It was a covert audio recording of two older drunken men sharing an apartment in San Francisco, who spent their time yelling, screaming, hitting, and generally abusing each other. This recording is “Shut Up Little Man!,” one of the world’s first viral pop-culture sensations. It all began when Eddie Lee Sausage and Mitchell D — two UW-Madison guys (anyone remember seeing the band Metal Blister at O’Cayz’s?) — moved to San Francisco to an ugly pink apartment building they called the Pepto-Bismol Palace. Their neighbors next door were Peter (a flamboyant gay man) and Ray (a raging homophobe). This ultimate odd-couple hated each other with raging abandon, and through the paper-thin walls their alcoholfueled rants terrorized Eddie and Mitch. Fearing for their lives they began to tape-record evidence of the insane goings-on next door. Their tapes went on to inspire a cult following, spawning sell-out CDs, comic artworks by Dan Clowes (Ghostworld), stage-plays, and music from Devo. Like the recent documentary Winnebago Man about Jack Rebney, Shut Up Little Man! explores the blurring boundary between privacy, art, and exploitation.

Around the campfire, the troop leader is telling spooky stories to the kids camping in the weeks. When the chilling story of Stumpy Sam comes to life, one of the nerdy kids steps forward to save the day. “We wanted to do something that both horror fans and musical geeks like us would like,” says Canadian codirector Jerome Sable. “So we hand-picked the cream-of-the-crop musical theatre talent for the cast, and then assembled the best horror special effects filmmaking team for the crew. What comes out at the other end is, we hope, a scare and a laugh and a catchy tune.”

The Legend of Beaver Dam