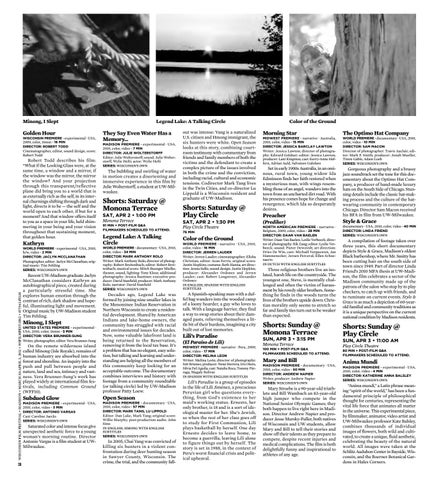 Robert Todd describes his film: “What if the Looking Glass were, at the same time, a window and a mirror, if the window was the mirror, the mirror the window? And your projection through this transparent/reflective plane did bring you to a world that is as externally rich as the self, in its internal churnings shifting through dark and light, directs it to be — the self and the world open to each other, if but for a moment? And that window offers itself to you as a space in your life, held shimmering in your being and your vision throughout that sustaining moment, that golden hour.

The bubbling and swirling of water in motion creates a disorienting and immersive experience in this film by Julie Wolterstorff, a student at UW-Milwaukee.

On the remote wilderness island called Minong (Isle Royale), remains of human industry are absorbed into the forest and shoreline. An inquiry into the push and pull between people and nature, land and sea, intimacy and vastness. Vera Brunner-Sung’s work has played widely at international film festivals, including Common Ground (WFF10).

Decades ago, Legend Lake was formed by joining nine smaller lakes in the Menominee Indian Reservation in Northern Wisconsin to create a residential development. Shared by American Indians and lake-home owners, the community has struggled with racial and environmental issues for decades. Now, some valuable lakefront land is being returned to the Reservation, removing it from the local tax base. It’s a problem that has no elegant, easy solution, but talking and learning and understanding are helping all the members of this community keep looking for an acceptable outcome. The documentary combines interviews and history with footage from a community roundtable (or talking circle) led by UW-Madison professor Patty Loew.

IN ENGLISH, HMONG WITH ENGLISH SUBTITLES SERIES: WISCONSIN’S OWN

In 2005, Chai Vang was convicted of killing six hunters in a violent confrontation during deer hunting season in Sawyer County, Wisconsin. The crime, the trial, and the community fall-

out was intense: Vang is a naturalized U.S. citizen and Hmong immigrant, the six hunters were white. Open Season looks at this story, combining courtroom testimony with commentary from friends and family members of both the victims and the defendant to create a complex picture of the issues involved in both the crime and the conviction, including racial, cultural and economic tensions. Codirector Mark Tang lives in the Twin Cities, and co-director Lu Lippold is a Wisconsin resident and graduate of UW-Madison.

Color of the Ground

Set in early 1900s Australia, in an ominous, rural town, young widow Ida Edminson finds her faith restored when a mysterious man, with wings resembling those of an angel, wanders into the town from an uncharted dirt road. With his presence comes hope for change and resurgence, which Ida so desperately desires.

Gorgeous photography and a brassy jazz soundtrack set the tone for this documentary about the Optimo Hat Company, a producer of hand-made luxury hats on the South Side of Chicago. Stunning details include the classic hat-making process and the culture of the hatwearing community in contemporary Chicago. Director Sam Macon received his BFA in film from UW-Milwaukee.

A Spanish-speaking man with a duffel bag wanders into the wooded camp of a loony hoarder, a guy who loves to talk. With a language barrier, they find a way to swap stories about their damaged pasts, relieving themselves a little bit of their burdens, imagining a city built out of lost memories.

Lili’s Paradise is a group of episodes in the life of Lili Jiménez, a precocious Peruvian girl who questions everything, from God’s existence to her maid’s working status. Ernesto, her only brother, is 18 and is a sort of ideological master for her. She’s Jewish, so when the rest of her class goes off to study for First Communion, Lili plays basketball by herself. One day Ernesto decides to leave home, to become a guerrilla, leaving Lili alone to figure things out by herself. The story is set in 1988, in the context of Peru’s worst financial crisis and political upheaval.

Three religious brothers live an isolated, harsh life on the countryside. The youngest one, Steve, is mentally challenged and often the victim of harassment by his rowdy older brothers. Something he finds in the woods turns the lives of the brothers upside down: Christian morality only seems to stretch so far and family ties turn out to be weaker than expected.

A compilation of footage taken over three years, this short documentary depicts Style &amp; Grace, Madison’s oldest Black barbershop, where Mr. Smitty has been cutting hair on the south side of town since 1949. Part of director Linda Friend’s 2010 MFA thesis at UW-Madison, the film celebrates a sector of the Madison community made up of the patrons of the salon who stop by to play checkers, to catch up with friends, and to ruminate on current events. Style &amp; Grace is as much a depiction of 60-yearold familial and community traditions as it is a unique perspective on the current national condition by Madison residents.

IN DUTCH WITH ENGLISH SUBTITLES

Mary Stroebe is a 90-year-old triathlete and Bill Wambach an 83-year-old high jumper who compete in the National Senior Olympic Games; they both happen to live right here in Madison. Director Andrew Napier and producer Jesse Mursky-Fuller, both natives of Wisconsin and UW students, allow Mary and Bill to tell their stories and show off their talents as they prepare to compete, despite recent injuries and medical complications. The film is both delightfully funny and inspirational to athletes of any age.

“Anima mundi,” a Latin phrase meaning “spirit of the world,” has been a fundamental principle of philosophical thought for centuries, representing the vital life force that animates all matter in the universe. This experimental piece, by filmmaker, animator, video artist and UW-Milwaukee professor Kate Balsley, combines thousands of individual images of flowers, both wild and cultivated, to create a unique, fluid aesthetic, celebrating the beauty of the natural world. All images were taken at the Schlitz Audubon Center in Bayside, Wisconsin, and the Boerner Botanical Gardens in Hales Corners.