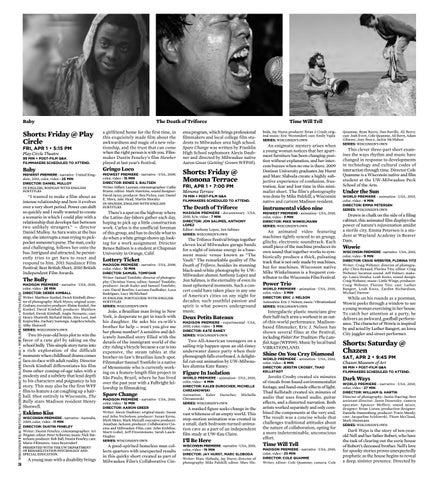 “I wanted to make a film about an intense relationship and how it evolves over a very short period. Power can shift so quickly and I really wanted to create a scenario in which I could play with a relationship that develops fast between two unlikely strangers.” — director Daniel Mulloy. As Sara waits at the bus stop, she interrupts a man trying to pickpocket someone’s purse. The man, cocky and challenging, follows her onto the bus. Intrigued and attracted, he persistently tries to get Sara to react and respond to him. 2011 Sundance Film Festival; Best British Short, 2010 British Independent Film Awards.

a girlfriend home for the first time, in this exquisitely made film about the awkwardness and magic of a new relationship, and the trust that can come when the right person is with you. Filmmaker Dustin Feneley’s film Hawker played at last year’s Festival.

The Death of Triforce

Two 10-year-old boys plot to win the favor of a cute girl by taking on the school bully. This simple story turns into a rich exploration of the difficult moments when childhood drama comes face-to-face with adult reality. Director Derek Kimball differentiates his film from other coming-of-age tales with a modesty and a subtlety that lend depth to his characters and poignancy to his story. This may also be the first WFF film to feature a cat coughing up a hairball. Shot entirely in Wisconsin, The Bully stars Madison resident Henry Shotwell.

A young man with a disability brings

There’s a spot on the highway where the Latino day-labors gather each day, hoping to pick up a little construction work. Carlos is the unofficial foreman of this group, and has to decide what to do when a white gringo shows up, looking for a work assignment. Director Renee Baltsen is a student at Chapman University in Orange, Calif.

João, a Brazilian man living in New York, is desperate to get in touch with his daughter. He asks his ex-wife’s brother for help — won’t you give me her phone number? A sensitive and delicately handled story filled with the details of the immigrant world of the city: riding a bicycle because a car is too expensive, the steam tables at the brother-in-law’s Brazilian lunch spot. Filmmaker Samuel Tomfohr is a native of Menomonie who is currently working on a feature-length film project in São Paulo, Brazil, where he has lived over the past year with a Fulbright fellowship in filmmaking.

An enigmatic mystery arises when a young woman notices that her apartment furniture has been changing position without explanation, and her intercom buzzes when no one is there. 2009 Denison University graduates Jay Hurst and Marc Slaboda create a highly subjective experience of confusion, frustration, fear and lost time in this minimalist short. The film’s photography was done by Mike Palzkill, a Wisconsin native and current Madison resident.

The Death of Triforce

An animated video featuring machines tightly synced to an grungy, glitchy, electronic soundtrack. Each small piece of the machine produces its own sound that together works to symbiotically produce a thick, pulsating track that is not only made by machines, but for machines. Wisconsin native Mike Winkelmann is a frequent contributor to the Wisconsin Film Festival.

The Triforce Festival brings together eleven local Milwaukee garage bands for a night of intense energy in a basement music venue known as “The Vault.” The remarkable quality of The Death of Triforce, besides its stunning black-and-white photography by UWMilwaukee alumni Anthony Lopez and Jon Salimes, is the eternality of even its most ephemeral moments. Such a concert could have taken place in any one of America’s cities on any night for decades; such youthful passion and spirit is what powers underground music.

A masked figure seeks change in the vast whiteness of an empty world. This stop-motion animation was created in a small, dark bedroom-turned-animation cave as a part of an independent film study at UW-Eau Claire.

Intergalactic plastic musicians give their half-inch arms a workout in an outof-this-world performance. Madisonbased filmmaker, Eric J. Nelson has shown several films at the Festival, including Fishin’ For Tradition: The Lutefisk Saga (WFF09). Music by local band ViBRATiONLAND.

Shine On You Crzy Diamond

This clever three-part short examines the ways rhythm and music have changed in response to developments in technology and cultural codes of interaction through time. Director Cole Quamme is a Wisconsin native and film student at the UW-Milwaukee Peck School of the Arts.

Drawn in chalk on the side of a filing cabinet, this animated film displays the power of nature’s rejuvenation amidst a sterile city. Emma Petersen is a student at Wayland Academy in Beaver Dam.

While on his rounds as a postman, Wowie peeks through a window to see a young woman exercising in her house. To catch her attention at a party, he delivers an awkward, goofball performance. The character of Wowie is inspired by and acted by Luther Bangert, an Iowa City juggler and street performer.

Jerstin Crosby created six minutes of visuals from found environmentalist footage, and hand-made effects of light. Thad Kellstadt created six minutes of audio that uses found audio, guitar effects, and a distorted narration. Both artists worked separately and only combined the components at the very end. The result was a concise whole that challenges traditional attitudes about the nature of collaboration, opting for a more indeterminable, unconscious effort.

Dark Ways is the story of ten-yearold Nell and her father Robert, who have the task of clearing out the eerie house of Robert’s deceased brother. Nell’s love for spooky stories proves unexpectedly prophetic as the house begins to reveal a deep, sinister presence. Directed by