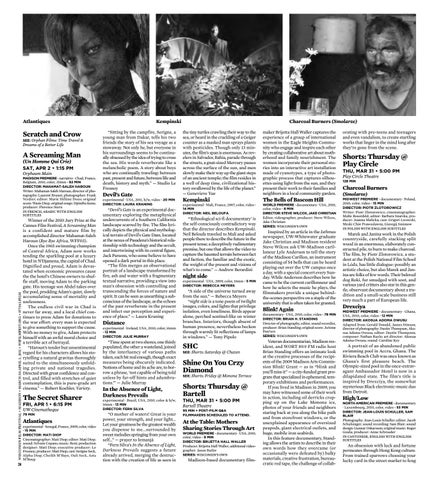 IN FRENCH, ARABIC WITH ENGLISH SUBTITLES

Winner of the 2010 Jury Prize at the Cannes Film Festival, A Screaming Man is a confident and mature film by accomplished director Mahamat-Saleh Haroun (Bye Bye Africa, WFF03). Once the 1965 swimming champion of Central Africa, Adam now works tending the sparkling pool at a luxury hotel in N’Djamena, the capital of Chad. Dignified and proud, Adam is devastated when economic pressures cause the the hotel’s Chinese owners to shuffle staff, moving Adam to the parking gate. His teenage son Abdel takes over the pool, prodding Adam’s quiet, slowly accumulating sense of mortality and uselessness. The endless civil war in Chad is never far away, and a local chief continues to press Adam for donations to the war effort: every man is expected to give something to support the cause. With no money to give, Adam protects himself with an awful moral choice and a terrible act of betrayal. “Haroun’s tender but unsentimental regard for his characters allows his storytelling a natural gravitas thoroughly suited to the simultaneously unfolding private and national tragedies. Directed with great confidence and control, and filled with stretches of quiet contemplation, this is pure-grade art cinema.” — Robert Koehler, Variety.

Kempinski “Sitting by the campfire, Serigne, a young man from Dakar, tells his two friends the story of his sea voyage as a stowaway. Not only he, but everyone in his surroundings seems to be continually obsessed by the idea of trying to cross the sea. His words reverberate like a melancholic poem. A story about boys who are continually traveling: between past, present and future, between life and death, history and myth.” — Studio Le Fresnoy

“Devil’s Gate is an experimental documentary exploring the metaphysical undercurrents of a Southern California landscape scarred by fire. The film lyrically depicts the physical and mythological terrain of Devil’s Gate Dam, located at the nexus of Pasadena’s historical relationship with technology and the occult, and intertwining with its central figure, Jack Parsons, who some believe to have opened a dark portal in this place. “The film merges an observational portrait of a landscape transformed by fire, ash and water with a fragmentary textual narrative, providing a view into man’s obsession with controlling and transcending the forces of nature and spirit. It can be seen as unearthing a subconscious of the landscape, as the echoes of the past reverberate in the present and infect our perception and experience of place.” — Laura Kraning

“Time spent at two shores, one thinly populated, the other a wasteland, joined by the interluency of various paths taken, each bit real enough, though exact measures being obscurely indicated. Notions of home and its ache are, to borrow a phrase, ‘not capable of being told unless by far-off hints and adumbrations.’” — Julie Murray

“O mother of waters! Great is your power, your strength, and your light... Let your greatness be the greatest wealth you dispense to me...surrounded by sweet melodies springing from your own self...” — prayer to Iemanjá “Fern Silva’s In the Absence of Light, Darkness Prevails suggests a future already arrived, merging the destruction with the creation of life as seen in

Charcoal Burners (Smolarze) the tiny turtles crawling their way to the sea, or heard in the crackling of a Geiger counter as a masked man sprays plants with pesticides. Though only 13 minutes, the film’s span is enormous. As revelers in Salvador, Bahia, parade through the streets, a gnat-sized Mercury passes across the surface of the sun, and men slowly make their way up the giant steps of an ancient temple; the film resides in a well of deep time, civilizational history swallowed by the life of the planet.” — Genevieve Yue

maker Brijetta Hall Waller captures the experience of a group of international women in the Eagle Heights Community who engage and inspire each other by creating collaborative art about motherhood and family nourishment. The women incorporate their personal stories into an interactive art installation made of cyanotypes, a type of photographic process that captures silhouettes using light from the sun, and they present their work to their families and neighbors in a local community garden.

orating with pre-teens and teenagers and even vandalism, to create startling works that linger in the mind long after they’re gone from the scene.

The Bells of Bascom Hill

“‘Ethnological sci-fi documentary’ is the self-consciously contradictory way that the director describes Kempinski. Neil Beloufa traveled to Mali and asked people there to describe the future in the present tense; a deceptively rudimentary premise, but one that allows the video to capture the haunted terrain between fact and faction, the familiar and the exotic, the weight of the present and visions of what’s to come.” — Andrew Berardini

“A side of the universe turned away from the sun.” — Rebecca Meyers “night side is a tone poem of twilight images, colors, and lights that privilege isolation, even loneliness. Birds appear alone, perched sentinel-like on winter branches. Interiors, though absent of human presence, nevertheless beckon through warmly lit reflections of lamps in windows.” — Tony Pipolo

Inspired by an article in the Isthmus newspaper, UW-Whitewater graduate Jake Christian and Madison resident Steve Wilcox ask UW-Madison carilloneur Lyle Anderson to tell the story of the Madison Carillon, an instrument consisting of 54 bells that can be heard playing out over the UW campus once a day, with a special concert every Sunday. While Anderson describes how he came to be the current carillonneur and how he selects the music he plays, the filmmakers provide a unique behindthe-scenes perspective on a staple of the university that is often taken for granted.

Marek and Janina work in the Polish countryside, carefully stacking split wood in an enormous, elaborately constructed pile, to burn to make charcoal. The film, by Piotr Zlotorowicz, a student at the Polish National Film School in Lódz, has little dialogue: possibly an artistic choice, but also Marek and Janina are folks of few words. Their beloved dog Roki, fur smudged with soot, and various yard critters also star in this gentle, observant documentary about a tradition and a small-scale business still very much a part of European life.

Veteran documentarian, Madison resident, and WORT 89.9 FM radio host Brian Standing offers an intimate look at the creative processes of the recipients of the 2009 Madison Arts Commission Blink! Grant — as in “blink and you’ll miss it” — a city-funded grant program that specialized in ephemeral, temporary exhibitions and performances. If you lived in Madison in 2009, you may have witnessed some of their work in action, including oil derricks cropping up on the Lake Monona ice, photos of your friends and neighbors staring back at you along the bike path and from storefront windows, or the unexplained appearance of oversized peapods, giant electrical outlets, and huge, mobile iron seabirds. In this feature documentary, Standing allows the artists to describe in their own words how they overcame (or occasionally were defeated by) balky materials, creative frustration, bureaucratic red tape, the challenge of collab-

A portrait of an abandoned public swimming pool in Accra, Ghana. The Riviera Beach Club was once known as Ghana’s first pleasure beach. The Olympic-sized pool in the once-extravagant Ambassador Hotel is now in a dilapidated state. The film’s title is inspired by Drexciya, the somewhat mysterious Black electronic-music duo from Detroit.

An obsession with luck and fortune permeates through Hong Kong culture. From trained sparrows choosing your lucky card in the street market to feng