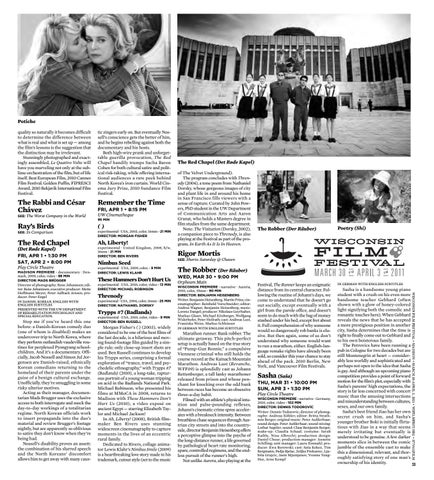 Potiche quality so naturally it becomes difficult to determine the difference between what is real and what is set up — among the film’s lessons is the suggestion that the distinction may be irrelevant. Stunningly photographed and exactingly assembled, Le Quattro Volte will have you marveling not only at the sublime orchestration of the film, but of life itself. Best European Film, 2010 Cannes Film Festival. Golden Puffin, FIPRESCI Award, 2010 Rekjavik International Film Festival.

tic zingers early on. But eventually Nossell’s conscience gets the better of him, and he begins rebelling against both the documentary and his hosts. Both high-wire prank and unforgettable guerilla provocation, The Red Chapel handily trumps Sacha Baron Cohen for both cultural satire and political risk-taking, while offering international audiences a rare peek behind North Korea’s iron curtain. World Cinema Jury Prize, 2010 Sundance Film Festival.

The Rabbi and César Chávez

SEE: The Worst Company in the World

IN DANISH, KOREAN, ENGLISH WITH ENGLISH SUBTITLES PRESENTED WITH THE UW DEPARTMENT OF REHABILITATION PSYCHOLOGY AND SPECIAL EDUCATION.

Stop me if you’ve heard this one before: a Danish-Korean comedy duo (one of whom is disabled) makes an undercover trip to North Korea, where they perform outlandish vaudeville routines for perplexed Pyongyang schoolchildren. And it’s a documentary. Officially, Jacob Nossell and Simon Jul Jorgensen are Danish-raised, ethnically Korean comedians returning to the homeland of their parents under the guise of a benign cultural exchange. Unofficially, they’re smuggling in some risky ulterior motives. Acting as their manager, documentarian Mads Brugger uses the exclusive access to both interrogate and mock the day-to-day workings of a totalitarian regime. North Korean officials work to insert propaganda into the duo’s material and review Brugger’s footage nightly, but are apparently so oblivious to satire they don’t know when they’re being had. Nossell’s disability proves an assett: the combination of his slurred speech and the North Koreans’ discomfort allows him to get away with many caus-

of The Velvet Underground). The program concludes with Threnody (2004), a tone poem from Nathaniel Dorsky, whose gorgeous images of city and plant life in and around his home in San Francisco fills viewers with a sense of rapture. Curated by John Powers, PhD student in the UW Department of Communication Arts and Aaron Granat, who holds a Masters degree in film studies from the same department. Note: The Visitation (Dorsky, 2002), a companion piece to Threnody, is also playing at the Festival as part of the program, In Earth As It Is In Heaven.

Morgan Fisher’s ( ) (2003), widely considered to be one of the best films of the last decade, is a hilarious and moving found-footage film guided by a simple rule: only close-up insert shots are used. Ben Russell continues to develop his Trypps series, comprising a formal exploration of “trance, travel, and psychedelic ethnography,” with Trypps #7 (Badlands) (2010), a long-take, rapturous portrait of a young woman tripping on acid in the Badlands National Park. Michael Robinson, who presented his films at MMoCA in 2008, returns to Madison with These Hammers Don’t Hurt Us (2010), a video exposé on ancient Egypt — starring Elizabeth Taylor and Michael Jackson! In Ah, Liberty! (2008), British filmmaker Ben Rivers uses stunning widescreen cinematography to capture moments in the lives of an eccentric rural family. Dedicated to Rivers, collage animator Lewis Klahr’s Nimbus Smile (2009) is a heartbreaking love story made in his trademark, cutout style (set to the music

Festival, The Runner keeps an enigmatic distance from its central character. Following the routine of Johann’s days, we come to understand that he doesn’t go out socially, except eventually with a girl from the parole office, and doesn’t seem to do much with the bag of money stashed under his bed, except fret about it. Full comprehension of why someone would so dangerously rob banks is elusive. But then again, some of us don’t understand why someone would want to run a marathon, either. English-language remake rights have already been sold, so consider this your chance to stay ahead of the pack. 2010 Berlin, New York, and Vancouver Film Festivals.

Marathon runner. Bank robber. The ultimate getaway. This pitch-perfect setup is actually based on the true story of “Pump-Gun Ronnie,” a compulsive Viennese criminal who still holds the course record at the Kainach Mountain Marathon. Andreas Lust (Revanche, WFF09) is splendidly cast as Johann Rettenberger, a tall lanky marathoner released from prison and whose penchant for knocking over the odd bank between races has become an obsessive three-a-day habit. Filmed with an athlete’s physical intuition and pulse-pounding reflexes, Johann’s cinematic crime spree accelerates with a breakneck intensity. Between breathless chase sequences through Austrian city streets and into the countryside, director Benjamin Heisenberg offers a perceptive glimpse into the psyche of the long-distance runner, a life governed by pathological heart rate monitoring, spare, controlled regimens, and the endless pursuit of the runner’s high. Not unlike Aurora, also playing at the

Sasha is a handsome young piano student with a crush on his even more handsome teacher Gebhard (often shown with a glow of honey-colored light signifying both the comedic and romantic touches here). When Gebhard reveals the news that he has accepted a more prestigious position in another city, Sasha determines that the time is right to finally come out to Gebhard and to his own boisterous family. The Petrovics have been running a pub in Cologne for two decades but are still Montenegrin at heart — considerably less worldly and sophisticated and perhaps not open to the idea that Sasha is gay. And although an upcoming piano competition provides a point of forward motion for the film’s plot, especially with Sasha’s parents’ high expectations, the story is far less concerned with concert music than the amusing intersections and misunderstanding between cultures, sexes, and our own family. Sasha’s best friend Jiao has her own secret crush on him, and Sasha’s younger brother Boki is initially flirtatious with Jiao in a way that seems merely irritating but eventually is understood to be genuine. A few darker moments slice in between the comic jumble of the ensemble cast to make this a dimensional, relevant, and thoroughly satisfying story of one man’s ownership of his identity. 23 WISCONSIN FILM FESTIVAL • MADISON • MARCH 30-APRIL 3, 2011 • WIFILMFEST.ORG • 877.963.FILM