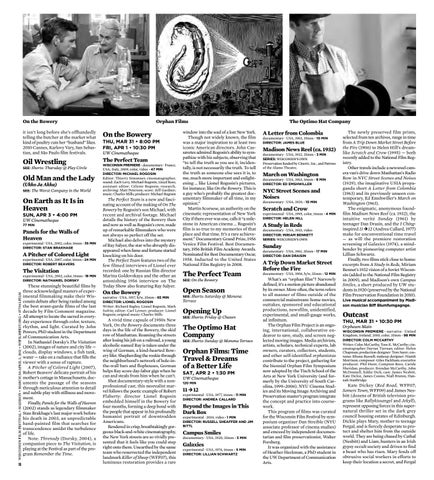 On the Bowery it isn’t long before she’s offhandedly telling the butcher at the market what kind of poultry cuts her “husband” likes. 2010 Cannes, Karlovy Vary, San Sebastian, and São Paulo film festivals.

Old Man and the Lady (Ukko Ja Akka) SEE: The Worst Company in the World

These stunningly beautiful films by three acknowledged masters of experimental filmmaking make their Wisconsin debuts after being ranked among the best avant-garde films of the last decade by Film Comment magazine. All attempt to locate the sacred in everyday experience through color, texture, rhythm, and light. Curated by John Powers, PhD student in the Department of Communication Arts. In Nathaniel Dorsky’s The Visitation (2002), images of nature and city life — clouds, display windows, a fish tank, water — take on a radiance that fills the viewer with a sense of rapture. A Pitcher of Colored Light (2007), Robert Beavers’ delicate portrait of his mother’s cottage in Massachusetts, documents the passage of the seasons through meticulous attention to detail and subtle play with stillness and movement. Finally, Panels for the Walls of Heaven (2002) stands as legendary filmmaker Stan Brakhage’s last major work before his death in 2003, an unpredictable hand-painted film that searches for transcendence amidst the turbulence of life. Note: Threnody (Dorsky, 2004), a companion piece to The Visitation, is playing at the Festival as part of the program Remember the Time.

On the Bowery UW Cinematheque

The Perfect Team is a new and fascinating account of the making of On The Bowery by Rogosin’s son Michael, with recent and archival footage. Michael details the history of the Bowery then and now as well as Rogosin’s crew, made up of remarkable filmmakers who were not always so perfect off the set. Michael also delves into the mystery of Ray Salyer, the star who abruptly disappeared when fame and fortune started knocking on his door. The Perfect Team features two of the few filmed interviews of Lionel ever recorded: one by Russian film director Marina Goldovskaya and the other an astonishing 1956 interview on The Today Show also featuring Ray Salyer.

window into the soul of a lost New York. Though not widely known, the film was a major inspiration to at least two iconic American directors. John Cassavetes admired Rogosin’s ability to sympathize with his subjects, observing that “to tell the truth as you see it, incidentally, is not necessarily the truth. To tell the truth as someone else sees it is, to me, much more important and enlightening ... like Lionel Rogosin’s pictures, for instance; like On the Bowery. This is a guy who’s probably the greatest documentary filmmaker of all time, in my opinion.” Martin Scorsese, an authority on the cinematic representation of New York City if there ever was one, calls it “a milestone in American cinema ... Rogosin’s film is so true to my memories of that place and that time. It’s a rare achievement.” Documentary Grand Prize, 1956 Venice Film Festival. Best Documentary, 1956 British Film Academy Awards. Nominated for Best Documentary Oscar, 1958. Inducted to the United States National Film Registry in 2008.

The Perfect Team SEE: On the Bowery

A vivid time capsule of 1950s New York, On the Bowery documents three days in the life of the Bowery, the skid row of Manhattan. Roaming the streets after losing his job on a railroad, a young alcoholic named Ray is taken under the wing of Gorman, a kind-hearted Bowery lifer. Shepherding the rookie through the neighborhood’s network of hole-inthe-wall bars and flophouses, Gorman helps Ray score day-labor gigs when he can and steals from him when he can’t. Shot documentary-style with a nonprofessional cast, this neorealist marvel follows the poetic example of Robert Flaherty: director Lionel Rogosin embedded himself in the Bowery for four months, forming a deep bond with the people that appear in his profoundly humanist portrait of downtrodden Americans. Rendered in crisp, breathtakingly gorgeous black-and-white cinematography, the New York streets are so vividly presented that it feels like you could step right onto them. Unearthed by the same team who resurrected the independent landmark Killer of Sheep (WFF07), this luminous restoration provides a rare

Beyond the Images in This Dark Box experimental · 2010, video · 1 MIN DIRECTOR: RUSSELL SHEAFFER AND JIM BITTL

Preservation funded by Cineric, Inc., and Patrons of the Alamo Theatre.

What’s an “orphan film”? Narrowly defined, it’s a motion picture abandoned by its owner. More often, the term refers to all manner of films outside of the commercial mainstream: home movies, outtakes, sponsored and educational productions, newsfilm, unidentified, experimental, and small-gauge works, ad infinitum. The Orphan Film Project is an ongoing, international, collaborative endeavor to save, study, and screen neglected moving images. Media archivists, artists, scholars, technical experts, lab owners, curators, collectors, students, and other self-identified orphanistas contribute to the project, gathering for the biennial Orphan Film Symposium now adopted by the Tisch School of the Arts at New York University (and formerly by the University of South Carolina, 1999–2006). NYU Cinema Studies and its Moving Image Archiving and Preservation master’s program integrate the concept and practice into coursework. This program of films was curated for the Wisconsin Film Festival by symposium organizer Dan Streible (NYU associate professor of cinema studies) and emceed by independent documentarian and film preservationist, Walter Forsberg. It was organized with the assistance of Heather Heckman, a PhD student in the UW Department of Communication Arts.

The newly preserved film prints, selected from ten archives, range in time from A Trip Down Market Street Before the Fire (1906) to Helen Hill’s dreamlike Scratch and Crow (1995) — both recently added to the National Film Registry. Other travels include a newsreel camera van’s drive down Manhattan’s Radio Row in NYC Street Scenes and Noises (1929), the imaginative USIA propaganda short A Letter from Colombia (1963) and its previously unseen contemporary, Ed Emshwiller’s March on Washington (1963). The enigmatic, anonymous foundfilm Madison News Reel (ca. 1932), the intuitive verité Sunday (1961) by teenager Dan Drasin, and the I Chinginspired 11 Æ 12 (Andrea Callard, 1977) make for unconventional time travel — as will the premiere restoration screening of Galaxies (1974), a mindbender by pioneering computer artist Lillian Schwartz. Finally, two films stick close to home: excerpts from A Study in Reds, Miriam Bennet’s 1932 vision of a Soviet Wisconsin (added to the National Film Registry in 2009), and Madison’s own Campus Smiles, a short produced by UW students in 1920 (preserved by the National Film Preservation Foundation in 2010). Live musical accompaniment by Madison musician Biff Blumfumgagnge.

Kate Dickey (Red Road, WFF07; Somers Town, WFF09) and James Nesbitt (dozens of British television programs like Ballykissangel and Jekyll), represent opposing forces in this supernatural thriller set in the dark grey council housing estates of Edinburgh. Dickie plays Mary, mother to teenage Fergal, and is fiercely desperate to protect and shelter him from the outside world. They are being chased by Cathal (Nesbitt) and Liam, hunters in an Irish gypsy occult society and driven to find a beast who has risen. Mary fends off obtrusive social workers in efforts to keep their location a secret, and Fergal