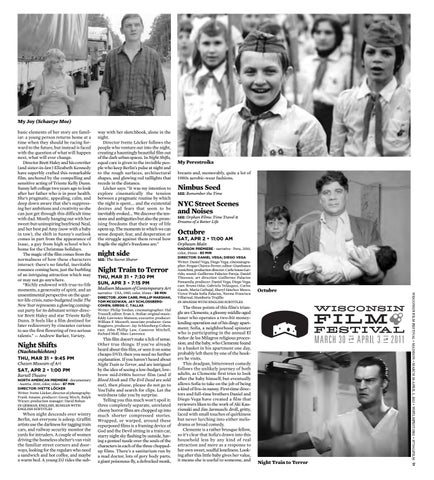 When night descends over wintry Berlin, not everyone is asleep. Graffiti artists use the darkness for tagging train cars, and railway security monitor the yards for intruders. A couple of women driving the homeless shelter’s van visit the familiar street corners and doorways, looking for the regulars who need a sandwich and hot coffee, and maybe a warm bed. A young DJ rides the sub-

way with her sketchbook, alone in the night. Director Ivette Löcker follows the people who venture out into the night, creating a hauntingly beautiful film out of the dark urban spaces. In Night Shifts, equal care is given to the invisible people who keep Berlin’s pulse at night and to the rough surfaces, architectural shapes, and glowing red taillights that recede in the distance. Löcker says: “It was my intention to explore cinematically the tension between a pragmatic routine by which the night is spent.... and the existential desires and fears that seem to be inevitably evoked.... We discover the tensions and ambiguities but also the promising freedoms that their way of life opens up. The moments in which we can sense despair, fear, and desperation or the struggle against them reveal how fragile the night’s freedoms are.”

night side SEE: The Secret Sharer

This film doesn’t make a lick of sense. Other true things: If you’ve already heard about this film, or seen it on some cheapo DVD, then you need no further explanation. If you haven’t heard about Night Train to Terror, and are intrigued by the idea of seeing a low-budget, lowbrow mid-1980s horror film (and if Blood Hook and The Evil Dead are sold out), then please, please do not go to YouTube and search for clips. Let the weirdness take you by surprise. Telling you this much won’t spoil it: three completely separate, unrelated cheesy horror films are chopped up into much shorter compressed stories. Wrapped, or warped, around these repurposed films is a framing device of God and the Devil sitting in a train car, starry night sky flashing by outside, having a genteel tussle over the souls of the characters in each of the three choppedup films. There’s a sanitarium run by a mad doctor, lots of gory body parts, a giant poisonous fly, a defrocked monk,

My Perestroika breasts and, memorably, quite a lot of 1980s aerobic-wear fashions.

The three points of this film’s triangle are Clemente, a gloomy middle-aged loner who operates a two-bit moneylending operation out of his dingy apartment; Sofia, a neighborhood spinster who is participating in the annual El Señor de los Milagros religious procession; and the baby, who Clemente found in a basket in his apartment one day, probably left there by one of the hookers he visits. This deadpan, bittersweet comedy follows the unlikely journey of both adults, as Clemente first tries to look after the baby himself, but eventually allows Sofia to take on the job of being a kind of live-in nanny. First-time directors and full-time brothers Daniel and Diego Vega have created a film that reviewers liken to the work of Aki Kaurismaki and Jim Jarmusch: droll, gritty, laced with small touches of quirkiness but never lurching into either melodrama or broad comedy. Clemente is a rather brusque fellow, so it’s clear that Sofia’s drawn into this household less by any kind of real attraction and more as a response to her own sweet, soulful loneliness. Looking after this little baby gives her value, it means she is useful to someone, and

basic elements of her story are familiar: a young person returns home at a time when they should be racing forward to the future, but instead is faced with the question of what will happen next, what will ever change. Director Brett Haley and his cowriter (and sister-in-law) Elizabeth Kennedy have superbly crafted this remarkable film, anchored by the compelling and sensitive acting of Trieste Kelly Dunn. Sunny left college two years ago to look after her father who is in poor health. She’s pragmatic, appealing, calm, and deep down aware that she’s suppressing her ambitions and creativity so she can just get through this difficult time with dad. Mostly hanging out with her sweet-but-uninspiring boyfriend Neal, and her best pal Amy (now with a baby in tow), the shift in Sunny’s outlook comes in part from the appearance of Isaac, a guy from high school who’s home for the Christmas holidays. The magic of the film comes from the normalness of how these characters interact: there’s no fateful, inevitable romance coming here, just the burbling of an intriguing attraction which may or may not go anywhere. “Richly endowed with true-to-life moments, a generosity of spirit, and an unsentimental perspective on the quarter-life crisis, nano-budgeted indie The New Year represents a glowing comingout party for its debutant writer-director Brett Haley and star Trieste Kelly Dunn. It feels like a film destined for later rediscovery by cineastes curious to see the first flowering of two serious talents.” — Andrew Barker, Variety.