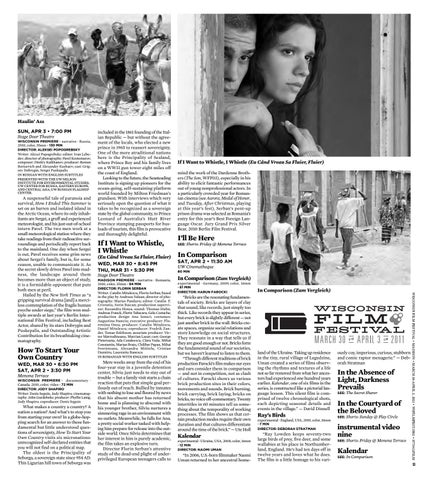 How To Start Your Own Country

What makes a country a country? A nation a nation? And what’s to stop you from starting your own? In a globe-hopping search for an answer to these fundamental but little understood questions of sovereignty, How To Start Your Own Country visits six micronations: unrecognized self-declared entities that you will not find on a political map. The oldest is the Principality of Seborga, a sovereign state since 954 AD. This Ligurian hill town of Seborga was

Mere weeks away from the end of his four-year stay in a juvenile detention center, Silviu just needs to stay out of trouble — but a family visit starts a chain reaction that puts that simple goal perilously out of reach. Bullied by inmates with nothing to lose and floored by news that his absent mother has returned home and is planning to abscond with his younger brother, Silviu nurtures a simmering rage in an environment with no outlets. Meanwhile, he falls for Ana, a pretty social worker tasked with helping him prepare for release into the outside world. Once Silviu determines that her interest in him is purely academic, the film takes an explosive turn. Director Florin Serban’s attentive study of the dead-end plight of underprivileged European teenagers calls to

If I Want to Whistle, I Whistle (Eu Când Vreau Sa Fluier, Fluier) mind the work of the Dardenne Brothers (The Son, WFF03), especially in his ability to elicit fantastic performances out of young nonprofessional actors. In a particularly crowded year for Romanian cinema (see Aurora, Medal of Honor, and Tuesday, After Christmas, playing at this year’s fest), Serban’s pent-up prison drama was selected as Romania’s entry for this year’s Best Foreign Language Oscar. Jury Grand Prix Silver Bear, 2010 Berlin Film Festival.

“Bricks are the resonating fundamentals of society. Bricks are layers of clay that sound, like records, just simply too thick. Like records they appear in series, but every brick is slightly different — not just another brick in the wall. Bricks create spaces, organize social relations and store knowledge on social structures. They resonate in a way that tells us if they are good enough or not. Bricks form the fundamental sound of our societies, but we haven’t learned to listen to them. “Through different traditions of brick production Farocki’s film makes our eyes and ears consider them in comparison — and not in competition, not as clash of cultures. Farocki shows us various brick production sites in their colors, movements and sounds. Brick burning, brick carrying, brick laying, bricks on bricks, no voice off-commentary. Twenty intertitles in 60 minutes tell us something about the temporality of working processes. The film shows us that certain production modes require their own duration and that cultures differentiate around the time of the brick.” — Ute Holl

“In 2006, U.S.-born filmmaker Naomi Uman returned to her ancestral home-

land of the Ukraine. Taking up residence in the tiny, rural village of Legedzine, Uman created a series of films observing the rhythms and textures of a life not so far removed from what her ancestors had experienced one hundred years earlier. Kalendar, one of six films in the series, is constructed like a pictorial language lesson. This silent film is comprised of twelve chronological shots, each depicting seasonal details and events in the village.” — David Dinnell

“Ray Lowden keeps seventy-two large birds of prey, five deer, and some wallabies at his place in Northumberland, England. He’s had ten days off in twelve years and loves what he does. The film is a little homage to his vari-

In the Absence of Light, Darkness Prevails SEE: The Secret Sharer

In the Courtyard of the Beloved SEE: Shorts: Sunday @ Play Circle

A suspenseful tale of paranoia and survival, How I Ended This Summer is set on an barren and isolated island in the Arctic Ocean, where its only inhabitants are Sergei, a gruff and experienced meteorologist, and his just-out-of-school intern Pavel. The two men work at a small meteorological station where they take readings from their radioactive surroundings and periodically report back to the mainland. One day when Sergei is out, Pavel receives some grim news about Sergei’s family, but is, for some reason, unable to communicate it. As the secret slowly drives Pavel into madness, the landscape around them becomes more than an object of study, it is a formidable opponent that puts both men at peril. Hailed by the New York Times as “a gripping survival drama [and] a merciless contemplation of the fragile human psyche under siege,” the film won multiple awards at last year’s Berlin International Film Festival, including Best Actor, shared by its stars Dobrygin and Puskepalis, and Outstanding Artistic Contribution for its breathtaking cinematography.

included in the 1861 founding of the Italian Republic — but without the agreement of the locals, who elected a new prince in 1965 to reassert sovereignty. One of the more atraditional nations here is the Principality of Sealand, where Prince Roy and his family lives on a WWII gun tower eight miles off the coast of England. Looking to the future, the Seasteading Institute is signing up pioneers for the ocean-going, self-sustaining platform world founded by Milton Friedman’s grandson. With interviews which very seriously open the question of what it takes to be recognized as a sovereign state by the global community, to Prince Leonard of Australia’s Hutt River Province stamping passports for busloads of tourists, this film is provocative and thoroughly delightful.