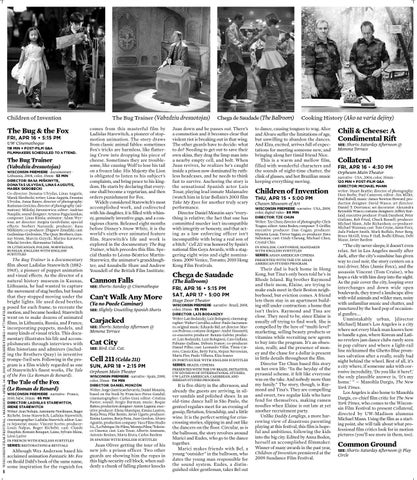 The Bug Trainer is a documentary film about Ladislas Starewitch (18821965), a pioneer of puppet animation and visual effects. As the director of a natural history museum in Kaunas, Lithuania, he had wanted to capture the movement of stag beetles, but found that they stopped moving under the bright lights. He used dead beetles, posed for each frame, to recreate the motion, and became hooked. Starewitch went on to make dozens of animated films, in Lithuania, Russia, and France, incorporating puppets, models, and many kinds of visual tricks. This documentary illustrates his life and accomplishments through interviews with film historians and admirers (including the Brothers Quay) in inventive trompe-l’œil sets. Following in the program is a film widely regarded as one of Starewitch’s finest works, The Tale of the Fox (Le Roman de Renard).

The Bug Trainer (Vabzdziu dresuotojas) comes from this masterful film by Ladislas Starewitch, a pioneer of stopmotion animation. The story draws from classic animal fables: sometimes Fox’s tricks are harmless, like flattering Crow into dropping his piece of cheese. Sometimes they are troublesome, like causing Wolf to lose his tail on a frozen lake. His Majesty the Lion is obligated to listen to his subject’s complaints, and bring peace to his kingdom. He starts by declaring that everyone shall become a vegetarian, and then orders punishment for Fox. Widely considered Starewitch’s most accomplished work, and codirected with his daughter, it is filled with whimsy, genuinely inventive gags, and a contagious charm. Released eight months before Disney’s Snow White, it is the world’s sixth-ever animated feature film. Starewitch’s life and work is explored in the documentary The Bug Trainer, which precedes this film. Special thanks to Léona-Béatrice MartinStarewicz, the animator’s granddaughter; and Annabelle Shaw and Andrew Youndell of the British Film Institute.

Juan down and he passes out. There’s a commotion and it becomes clear that violent riot is breaking out in that wing. The other guards have to decide: what to do? Needing to get out to save their own skins, they drag the limp man into a nearby empty cell, and bolt. When Juan revives, he realizes he’s caught inside a prison now dominated by ruthless headcases, and he needs to think fast to survive. Anchoring the story is the sensational Spanish actor Luis Tosar, playing lead inmate Malamadre (watch him in Icíar Bollaín’s 2003 film Take My Eyes for another truly scary performance. Director Daniel Monzón says “everything is relative; the fact that one has committed murder isn’t incompatible with integrity or honesty, and that acting as a law enforcing officer isn’t incompatible with being a real son of a bitch.” Cell 211 was honored by Spain’s national film Goya Awards, with a staggering eight wins and eight nominations. 2009 Venice, Toronto; 2010 Hong Kong Film Festivals.

Can’t Walk Any More (Ya no Puede Caminar)

Although Wes Anderson based his acclaimed animation Fantastic Mr. Fox on Roald Dahl’s book of the same name, some inspiration for the roguish fox

The Tale of the Fox

Juan Oliver getting the tour of his new job: a prison officer. Two other guards are showing him the ropes in this high-security cell block, when suddenly a chunk of falling plaster knocks

It is five-thirty in the afternoon, and already the guests are arriving, in silver sandals and polished shoes. In an old-time dance hall in São Paulo, the genteel regulars meet for an evening of gossip, flirtation, friendship, and a little wine. It is the perfect setting for crisscrossing stories, slipping in and out like the dancers on the floor. Circular, as is the ballroom, the story revolves around Marici and Eudes, who go to the dance together. Marici makes friends with Bel, a young “outsider” in the ballroom, who dates the young man responsible for the sound system. Eudes, a distinguished older gentleman, takes Bel out

to dance, causing tongues to wag. Alice and Álvaro suffer the limitations of age, but unwilling to abandon the dances. And Elza, excited, arrives full of expectations for meeting someone new, and bringing along her timid friend Nice. This is a warm and mellow film, filled with wonderful characters and the sounds of night-time chatter, the clink of glasses, and hot Brazilian music keeping everything moving.

Their dad is back home in Hong Kong, but Tina’s only been told he’s in Rhode Island. Big brother Raymond and their mom, Elaine, are trying to make ends meet in their Boston neighborhood, but eviction comes. A friend lets them stay in an apartment building still under contruction: a home that isn’t theirs. Raymond and Tina are close. They need to be, since Elaine is usually off trying to find work. She is compelled by the lure of “multi-level” marketing, selling beauty products or vitamins while recruiting new agents to buy into the program. It’s an obsession, really, and the presence of money and the chase for a dollar is present in little details throughout the film. Director Tze Chun based this story on her own life: “In the heyday of the pyramid scheme, it felt like everyone was on the take. And nobody more than my family.” The story, though, is Raymond and Tina’s. They are compelling and sweet, two regular kids who have fend for themselves, making ramen noodles when Elaine is out late at yet another recruitment party. Unlike Daddy Longlegs, a more harrowing view of disastrous parenting playing at this festival, this film is hopeful and ambitious, following the kids into the big city. Edited by Anna Boden, herself an accomplished filmmaker. Winner of many awards in the past year, Children of Invention premiered at the 2009 Sundance Film Festival.

“The city never sleeps; it doesn’t even relax. Set in Los Angeles mostly after dark, after the city’s sunshine has given way to cool noir, the story centers on a taxi driver, Max (Jamie Foxx), and the assassin Vincent (Tom Cruise), who hops a ride with him deep into the night. As the pair cover the city, looping over interchanges and down wide open boulevards, they travel a landscape alive with wild animals and wilder men, noisy with unfamiliar music and chatter, and punctured by the hard pop of occasional gunfire.... Unmistakably urban, [director Michael] Mann’s Los Angeles is a city where not every black man knows how to handle a gun, where Korean and Latino revelers jam dance clubs rarely seen in pop culture and where a light-rail line nicknamed the Ghetto Blue promises salvation after a really, really bad night behind the wheel. Best of all, it’s a city where, if someone asks with corrosive incredulity, ‘Do you like it here?,’ the only plausible answer is, ‘It’s my home.’ ’’ — Manohla Dargis, The New York Times. Los Angeles is also home to Manohla Dargis, co-chief film critic for The New York Times, who comes to the Wisconsin Film Festival to present Collateral, directed by UW-Madison alumnus Michael Mann. Using the film as a starting point, she will talk about what professional film critics look for in motion pictures (you’ll see more in them, too).