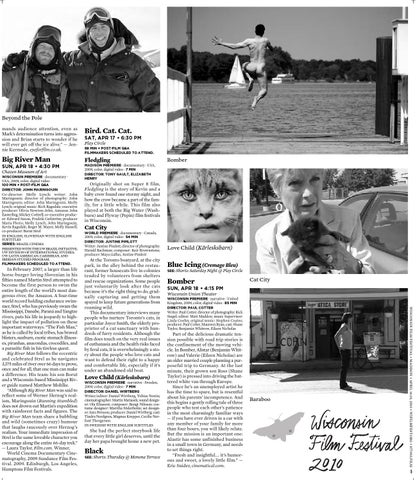 Beyond the Pole mands audience attention, even as Mark’s determination turns into aggression and Brian starts to wonder if he will ever get off the ice alive.” — Jennie Kermode, eyeforfilm.co.uk.

Originally shot on Super 8 film, Fledgling is the story of Kevin and a baby crow found one stormy night, and how the crow became a part of the family, for a little while. This film also played at both the Big Water (Washburn) and Flyway (Pepin) film festivals in Wisconsin.

At the Toronto boatyard, at the city park, in the alley behind the restaurant, former housecats live in colonies tended by volunteers from shelters and rescue organizations. Some people just voluntarily look after the cats because it’s the right thing to do, gradually capturing and getting them spayed to keep future generations from roaming wild. This documentary interviews many people who nurture Toronto’s cats, in particular Joyce Smith, the elderly proprietor of a cat sanctuary with hundreds of furry residents. Although the film does touch on the very real issues of euthanasia and the health risks faced by feral cats, it is overwhelmingly a story about the people who love cats and want to defend their right to a happy and comfortable life, especially if it’s under an abandoned old boat.

She had the perfect storybook life that every little girl deserves, until the day her papa brought home a new pet.

Part of the delicious dramatic tension possible with road trip stories is the confinement of the moving vehicle. In Bomber, Alistar (Benjamin Whitrow) and Valerie (Eileen Nicholas) are an older married couple planning a purposeful trip to Germany. At the last minute, their grown son Ross (Shane Taylor) is pressed into driving the battered white van through Europe. Since he’s an unemployed artist he has the time to spare, but is resentful about his parents’ incompetence. And this begins a gently rolling tale of three people who test each other’s patience in the most charmingly familiar ways — if you have ever driven in a car with any member of your family for more than four hours, you will likely relate. But the mission is an important one: Alastir has some unfinished business in a small town in Germany, and needs to set things right. “Fresh and insightful.... it’s humorous and sweet, a lovely little film.” — Eric Snider, cinematical.com.

In February 2007, a larger than life horse-burger loving Slovenian in his fifties named Martin Strel attempted to become the first person to swim the entire length of the world’s most dangerous river, the Amazon. A four-time world record holding endurance swimmer, Strel, who has previously swam the Mississippi, Danube, Paraná and Yangtze rivers, puts his life in jeopardy to highlight the impact of pollution on these important waterways. “The Fish Man,” as he is called by local tribes, has braved blisters, sunburn, exotic stomach illnesses, piranhas, anacondas, crocodiles, and a parasitic fish in his tireless quest. Big River Man follows the eccentric and celebrated Strel as he navigates 3,375 miles of river over 66 days to prove, once and for all, that one man can make a difference. His team: his son Borut and a Wisconsin-based Mississippi River guide named Matthew Mohlke. “Although Big River Man was said to reflect some of Werner Herzog’s realism, Maringouin (Running Stumbled) does not drown out Martin’s expedition with rainforest facts and figures. The Big River Man team share a bubbling and wild (sometimes crazy) humour that laughs raucously over Herzog’s realism. Your immediate impression of Strel is the same loveable character you encourage along the entire 66-day trek.” — Laura Taylor, Film.com. Winner, World Cinema Documentary Cinematography, 2009 Sundance Film Festival. 2009. Edinburgh, Los Angeles, Hamptons Film Festivals.