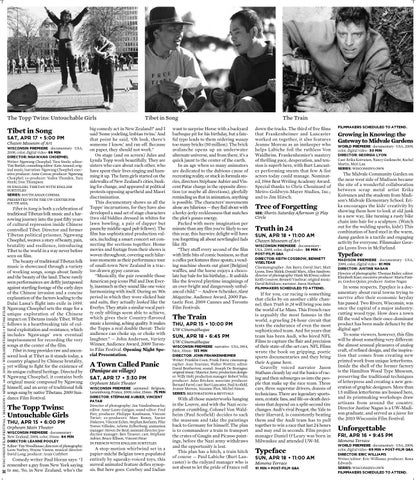 Tibet in Song is both a celebration of traditional Tibetan folk music and a harrowing journey into the past fifty years of cultural repression inside Chinese controlled Tibet. Director and former Tibetan political prisoner, Ngawang Choephel, weaves a story of beauty, pain, brutality and resilience, introducing Tibet to the world in a way never before seen on film. The beauty of traditional Tibetan folk music is showcased through a variety of working songs, songs about family and the beauty of the land. These rarely seen performances are deftly juxtaposed against startling footage of the early days of the Chinese invasion and a concise explanation of the factors leading to the Dalai Lama’s flight into exile in 1959. Ngawang Choephel sets the stage for a unique exploration of the Chinese impact on Tibetans inside Tibet. What follows is a heartbreaking tale of cultural exploitation and resistance, which includes Ngawangs’ own eventual imprisonment for recording the very songs at the center of the film. Tibet in Song provides raw and uncensored look at Tibet as it stands today, a country plagued by Chinese brutality, yet willing to fight for the existence of its unique cultural heritage. Directed by Ngawang Choephel, it contains both original music composed by Ngawang himself, and an array of traditional folk songs sung by native Tibetans. 2009 Sundance Film Festival.

Comedy writer Paul Horan says: “I remember a guy from New York saying 34 to me, ‘So, in New Zealand, who’s the

big comedy act in New Zealand?’ and I said ‘Some yodeling, lesbian twins.’ And that point he said, ‘Oh look, there’s someone I know,’ and ran off. Because on paper, they should not work.” On stage (and on screen) Jules and Lynda Topp work beautifully. They are sisters who care about each other, who have spent their lives singing and hamming it up. The farm girls started on the sidewalks of New Zealand’s cities, busking for change, and appeared at political protests opposing apartheid and Maori discrimination. This documentary shows us all the Topps’ incarnations, for they have also developed a mad set of stage characters (two old biddies dressed in whites for lawn bowling; a pair of dapper but paunchy middle-aged pub fellows). The film has sophisticated production values, including a smart concert set connecting the sections together. Home movies and footage from their shows is woven throughout, covering such hilarious moments as their performance tour of small-town New Zealand in a tractor-drawn gypsy caravan. “Musically, the pair resemble those American pop icons Phil and Don Everly, inasmuch as they sound like one voice harmonizing with itself. During an ’80s period in which they wore slicked hair and suits, they actually looked like the Everlys. They attain a similar vocal purity only siblings seem able to achieve, which gives their Country-flavored music a keening, aching quality. It makes the Topps a real double threat: Their audience can choke up, or choke with laughter.” — John Anderson, Variety Winner, Audience Award, 2009 Toronto Film Festival. Opening Night Special Presentation.

want to surprise Horse with a backyard barbeque pit for his birthday, but a fateful typo leads to them ordering waaay too many bricks (50 million). The brick avalanche opens up an underwater alternate universe, and from there, it’s a quick jaunt to the center of the earth. In an age when so many animators are dedicated to the dubious cause of recreating reality, or stuck in formula stories, directors Stéphane Aubier and Vincent Patar charge in the opposite direction (or maybe all directions), gleefully reminding us that in animation, anything is possible. The characters’ movements alone are hilarious — they flail about with a herky-jerky recklessness that matches the plot’s gonzo energy. Packed with more imagination per minute than any film you’re likely to see this year, this haywire delight will have you forgetting all about newfangled fads like 3D. “They stuff every second of the film with little bits of comic business, so that a coffee pot features three spouts, a vending machine shoots out giant [Belgian] waffles, and the horse enjoys a chocolate hay bale for his birthday.... It unfolds like the fevered playtime imaginings of an over-bright and dangerously unbalanced child.” — Andrew Schenker, Slant Magazine. Audience Award, 2009 Fantastic Fest. 2009 Cannes and Toronto Film Festivals.

With all those masterworks hanging in the Louvre, and with the Nazi occupation crumbling, Colonel Von Waldheim (Paul Scofield) decides to sack the museum and take the paintings back to Germany for himself. The plan is to commandeer a train to transport the crates of Gaugin and Picasso paintings, before the Nazi army withdraws and the opportunity is lost. This plan has a hitch, a train hitch of course — Paul Labiche (Burt Lancaster) is the railyard manager who is not about to let the pride of France roll

The Train down the tracks. The third of five films that Frankenheimer and Lancaster worked on together, it also features Jeanne Moreau as an innkeeper who helps Labiche foil the ruthless Von Waldheim. Frankenhemier’s mastery of thrilling pace, desperation, and tension is superb here, with Burt Lancaster performing stunts that few A-list actors today could manage. Nominated, 1966 Best Writing Academy Award. Special thanks to Chris Chouinard of Metro-Goldwyn-Mayer Studios, Inc.; and to Jim Hirsch.

If for you, car racing is something that clicks by on another cable channel, then Truth in 24 will bring you into the world of Le Mans. This French race is arguably the most famous in the world, a grueling 24-hour circuit that tests the endurance of even the most sophisticated team. And for years that team has been Audi, who hired NFL Films to capture the flair and precision of their state-of-the-art cars. NFL Films wrote the book on gripping, poetic sports documentaries and they bring their A-game here. Gravelly voiced narrator Jason Statham cleanly lay out the basics of racing and then submerges us into the people that make up the race team. Three cars, three superstar drivers, dozens of technicians. There are legendary sportsmen, ecstatic fans, and life-or-death decisions that depend on a split-second tire changes. Audi’s rival Peugot, the Yale to their Harvard, is consistently beating them and the Audi team has to pull together to win a race that last 24 hours and may end in seconds. Film project manager Daniel O’Leary was born in Milwaukee and attended UW-M.

Growing in Knowing: the Gateway to Midvale Gardens

The Midvale Community Garden on the near west side of Madison became the site of a wonderful collaboration between scrap metal artist Erika Koivunen and the students from Madison’s Midvale Elementary School. Erika encourages the kids’ creativity by showing them how to look at old junk in a new way, like turning a rusty bike chain into hair for a sculpture. (Watch out for the welding sparks, kids!) This combination of hard steel in the warm, damp garden is a tactile and engaging activity for everyone. Filmmaker Georgia Lyons lives in McFarland.

In some respects, Typeface is a documentary about rural towns trying to survive after their economic heyday has passed. Two Rivers, Wisconsin, was once the capital of a major industry: cutting wood type. How does a town fill the void when their once-dominant product has been made defunct by the digital age? To some viewers, however, this film will be about something very different: the almost sensual pleasures of analog craft, of refined design, and the inspiration that comes from creating new printed work from unique letterforms. Inside the shell of the former factory is the Hamilton Wood Type Museum, preserving the traditional techniques of letterpress and creating a new generation of graphic designers. More than 1.5 million letterforms are housed here, and its printmaking workshops draw artisans from around the country. Director Justine Nagan is a UW-Madison graduate, and served as a juror for the 2010 Wisconsin Film Festival.