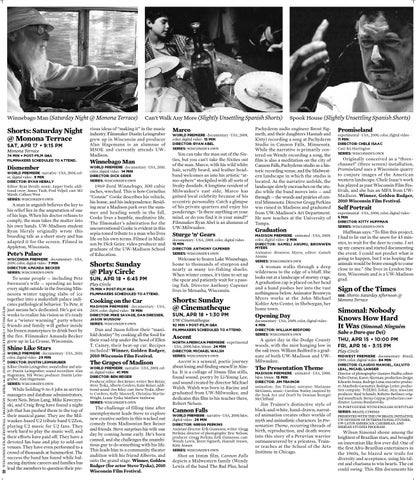 A man in anguish believes the key to his relief lies in the amputation of one of his legs. When his doctor refuses to comply, the man takes the matter into his own hands. UW-Madison student Ryan Heraly originally wrote this brooding tale as a short story and has adapted it for the screen. Filmed in Appleton, Wisconsin.

To some people — including Pete Swenson’s wife — spending an hour every night outside in the freezing Minnesota winter tapping slabs of ice together into a makeshift palace indicates pathological behavior. To Pete, it just means he’s dedicated. He’s got six weeks to realize his vision so it’s ready for a “winter warming” party where friends and family will gather inside his frozen masterpiece to drink beer by the fire. Filmmaker Amanda Becker grew up in La Crosse, Wisconsin.

vious ideas of “making it” in the music industry. Filmmaker Dustin Leimgruber grew up in Wisconsin and producer Alan Hagemann is an alumnus of MSOE and currently attends UWMadison.

1969 Ford Winnebago, 300 cubic inches, wrecked. This is how Cornelius “Connie” Cooke describes his vehicle, his home, and his independence. Residing near a Madison park over the summer and heading south in the fall, Cooke lives a humble, meditative life. The filmmaker’s admiration for the unconventional Cooke is evident in this sepia-toned tribute to a man who lives life on his own terms. Filmed in Madison by Dick Geier, video producer and graduate of the UW-Madison School of Education.

Cooking on the Car

Dan and Jason follow their “manifold destiny” by cooking all the food for their road-trip under the hood of Ellen T. Camry, their beat-up car. Recipes included! Winner, Golden Badger, 2010 Wisconsin Film Festival.

The Grapes of Madison

While holding 9-to-5 jobs as service managers and database administrators, Scott Neis, Brian Lang, Mike Kawczynski, and Craig Brog have found a night job that has pushed them to the top of their musical game. They are the Milwaukee-based U2 tribute band U2Zoo, playing U2 music for U2 fans. They work hard to play the music well, and their efforts have paid off. They have a devoted fan base and play to sold-out venues. They have even performed to a crowd of thousands at Summerfest. The success the band has found while balancing daytime careers and families has lead the members to question their pre-

The challenge of filling time after unemployment leads Steve to explore new creative outlets in this wacked out comedy from Madisonian Ben Reiser and friends. Steve surprises his wife one day by coming home early. He’s been canned, and she challenges the unambitious guy to do something with his life. This leads him to a community theater audition with his friend Alberto, and onto the grand stage. Winner, Golden Badger (for actor Steve Tyska), 2010 Wisconsin Film Festival.

You can take the man out of the Sixties, but you can’t take the Sixties out of the man. Marco, with his wild white hair, scruffy beard, and leather headband welcomes us into his artistic “atmo-sphere” stockpiled with all sorts of freaky doodads. A longtime resident of Milwaukee’s east side, Marco has gained local celebrity because of his eccentric personality. Catch a glimpse of his private quarters and enjoy his ponderings: “Is there anything on your mind, or do you find it in your mind?” Filmmaker Ryan Abel is an alumnus of UW-Milwaukee.

Welcome to frozen Lake Winnebago, home to thousands of sturgeon and nearly as many ice-fishing shacks. When winter comes, it’s time to set up the spear and patiently wait for a passing fish. Director Anthony Capener lives in Menasha, Wisconsin.

Ascent is a sensual, poetic journey about losing and finding oneself in Alaska. It is a collage of 35mm film stills, found sound, poetry by Li-Young Lee, and sound created by director Michael Walsh. Walsh was born in Racine and graduated from UW-Milwaukee, and dedicates this film to his teacher there, Robert Nelson.

Shot on 16mm film, Cannon Falls depicts a Midwestern family (Wendy Lewis of the band The Bad Plus, head

Pachyderm audio engineer Brent Sigmeth, and their daughters Hannah and Kitty) recording a song at Pachyderm Studio in Cannon Falls, Minnesota. While the narrative is primarily centered on Wendy recording a song, the film is also a meditation on the city of Cannon Falls, Pachyderm studio as a historic recording venue, and the Midwestern landscape in which the studio is located. As the narrative unfolds, the landscape slowly encroaches on the studio while the band moves into — and through — the woods and prairies of central Minnesota. Director Gregg Perkins was raised in Madison and graduated from UW-Madison’s Art Department. He now teaches at the University of Tampa.

A woman walks through a deep wilderness to the edge of a bluff. She looks out at a landscape of stormy crags. A graduation cap is placed on her head and a hand pushes her into the vast nothingness below. Animator Bronwyn Myers works at the John Michael Kohler Arts Center, in Sheboygan, her home town.

A quiet day in the Dodge County woods, with the mist hanging low in the oak trees. William Bedford is a graduate of both UW-Madison and UWMilwaukee.

Jim Trainor’s distinctive style of black-and-white, hand-drawn, narrated animation creates other worlds of myth and animalistic characters. In Presentation Theme, recurring threads of birth, reproduction, and death weave into this story of a Peruvian warrior outmaneuvered by a priestess. Trainor teaches at the School of the Arts Institute in Chicago.

Huffman says: “To film this project, I had to lie out in the snow for 45 minutes, to wait for the deer to come. I set up my camera and started documenting the event. I could not predict what is going to happen, but I was hoping the animals would be brave enough to come close to me.” She lives in Lyndon Station, Wisconsin and is a UW-Madison grad.

Wilson Simonal shone among the brightest of Brazilian stars, and brought on innovation like few ever did. One of the first Afro-Brazilian entertainers in the 1960s, he blazed new trails for diversity and acceptance, using his talent and charisma to win hearts. The cat could swing. This film documents his