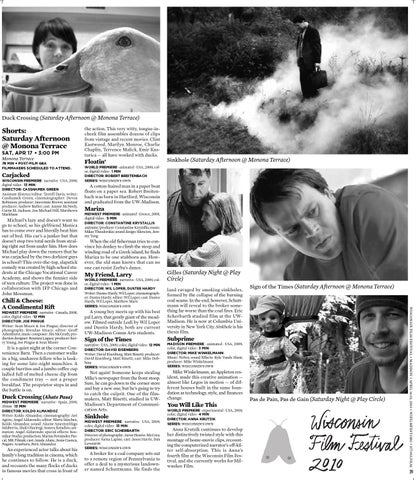 Michael’s lazy and doesn’t want to go to school, so his girlfriend Monica has to come over and literally beat him out of bed. His car’s a junker but that doesn’t stop two total nerds from stealing right out from under him. How does Michael play down the rumors that he was carjacked by the two dorkiest guys in school? This over-the-top, slapstick comedy was created by high-school students at the Chicago Vocational Career Academy, and shows the funnier side of teen culture. The project was done in collaboration with IFP Chicago and John Mossman.

It is a quiet night at the corner Convenience Barn. Then a customer walks in: a big, unshaven fellow who is looking for some late-night munchies. A couple burritos and a jumbo coffee cup ladled full of melted cheese dip from the condiment tray — not a proper breakfast. The proprietor steps in and the battle is on.

An experienced actor talks about his family’s long tradition in cinema, which he continues to follow. He is a duck, and recounts the many flocks of ducks in famous movies that cross in front of

A cotton-haired man in a paper boat floats on a paper sea. Robert Breitenbach was born in Hartford, Wisconsin and graduated from the UW-Madison.

When the old fisherman tries to convince his donkey to climb the steep and winding road of a Greek island, he finds Mariza to be one stubborn ass. However, the old man knows that can no one can resist Zorba’s dance.

A young boy meets up with his best pal Larry, that gently giant of the meadow. Filmed outside Lodi by Wil Loper and Dustin Hardy, both are current UW-Madison Comm Arts students.

Gilles (Saturday Night @ Play Circle) land ravaged by smoking sinkholes, formed by the collapse of the burning coal seams. In the end, however, Schuttmann will reveal to the broker something far worse than the coal fires. Eric Scherbarth studied film at the UWMadison. He is now at Columbia University in New York City. Sinkhole is his thesis film.

Not again! Someone keeps stealing Mike’s newspaper from the front stoop. Sure, he can go down to the corner store and buy a new one, but he’s going to try to catch the culprit. One of the filmmakers, Matt Binetti, studied in UWMadison’s Department of Communication Arts.

Mike Winkelmann, an Appleton resident, made this creative animation — almost like Legos in motion — of different houses built in the same foundation as technology, style, and finances change.

A broker for a coal company sets out to a remote region of Pennsylvania to offer a deal to a mysterious landowner named Schuttmann. He finds the

Anna Krutzik continues to develop her distinctively twisted style with this montage of home-movie clips, recounting the computerized narrator’s off-kilter self-absorption. This is Anna’s fourth film at the Wisconsin Film Festival, and she currently works for Milwaukee Film.