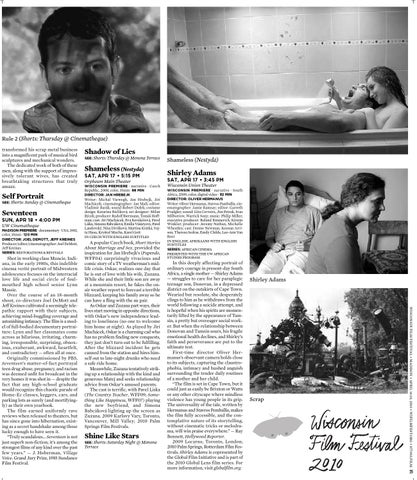 Rule 2 (Shorts: Thursday @ Cinematheque) transformed his scrap metal business into a magnificent park of musical bird sculptures and mechanical wonders. The dedicated work of both of these men, along with the support of impressively tolerant wives, has created breathtaking structures that truly amaze.

A popular Czech book, Short Stories About Marriage and Sex, provided the inspiration for Jan Hrebejk’s (Pupendo, WFF04) surprisingly vivacious and comic story of a TV weatherman’s midlife crisis. Oskar, realizes one day that he is out of love with his wife, Zuzana. While she and their little son are away at a mountain resort, he fakes the onair weather report to forecast a terrible blizzard, keeping his family away so he can have a fling with the au pair. As Oskar and Zuzana part ways, their lives start moving in opposite directions, with Oskar’s new independence leading to loneliness (no one to welcome him home at night). As played by Jirí Machácek, Oskar is a charming cad who has no problem finding new conquests, they just don’t turn out to be fulfilling. After the blizzard incident he gets canned from the station and hires himself out to late-night drunks who need a safe ride home. Meanwhile, Zuzana tentatively striking up a relationship with the kind and generous Matej and seeks relationship advice from Oskar’s amused parents. The cast is terrific, with Pavel Liska (The Country Teacher, WFF09; Something Like Happiness, WFF07) playing the new boyfriend, and Simona Babcáková lighting up the screen as Zuzana. 2009 Karlovy Vary, Toronto, Vancouver, Mill Valley; 2010 Palm Springs Film Festivals.

In this deeply affecting portrait of ordinary courage in present-day South Africa, a single mother — Shirley Adams — struggles to care for her paraplegic teenage son, Donovan, in a depressed district on the outskirts of Cape Town. Wearied but resolute, she desperately clings to him as he withdraws from the world following a suicide attempt, and is hopeful when his spirits are momentarily lifted by the appearance of Tamsin, a pretty but overeager social worker. But when the relationship between Donovan and Tamsin sours, his fragile emotional health declines, and Shirley’s faith and perseverance are put to the ultimate test. First-time director Oliver Hermanus’s observant camera holds close to its subjects, capturing the claustrophobia, intimacy and hushed anguish surrounding the tender daily routines of a mother and her child. “The film is set in Cape Town, but it could just as easily be Brixton or Watts or any other cityscape where mindless violence has young people in its grip. The universality of the tale, written by Hermanus and Stavros Pemballis, makes the film fully accessible, and the contemplative nature of its storytelling, without cinematic tricks or melodrama, will win praise everywhere.” — Ray Bennett, Hollywood Reporter. 2009 Locarno, Toronto, London; 2010 Palm Springs, Rotterdam Film Festivals. Shirley Adams is copresented by the Global Film Initiative and is part of the 2010 Global Lens film series. For more information, visit globalfilm.org.

Shot in working class Muncie, Indiana, in the early 1980s, this indelible cinema verité portrait of Midwestern adolescence focuses on the interracial love life and social circle of foulmouthed high school senior Lynn Massie. Over the course of an 18-month shoot, co-directors Joel DeMott and Jeff Kreines cultivated a seemingly telepathic rapport with their subjects, achieving mind-boggling coverage and astonishing intimacy. The film is a model of full-bodied documentary portraiture: Lynn and her classmates come across as hilarious, irritating, charming, irresponsible, surprising, obnoxious, exuberant, awkward, heartfelt, and contradictory — often all at once. Originally commissioned by PBS, Seventeen’s matter-of-fact portrayal teen drug abuse, pregnancy, and racism was deemed unfit for broadcast in the very homes it was shot in — despite the fact that any high-school graduate would recognize this chaotic parade of Home-Ec classes, keggers, cars, and parking lots as surely (and mortifyingly) as their own yearbook. The film earned uniformly rave reviews when released to theaters, but has since gone into hibernation, existing as a secret handshake among those lucky enough to have seen it. “Truly scandalous... Seventeen is not just superb non-fiction; it’s among the strongest films of any kind over the past few years.” — J. Hoberman, Village Voice. Grand Jury Prize, 1985 Sundance Film Festival.