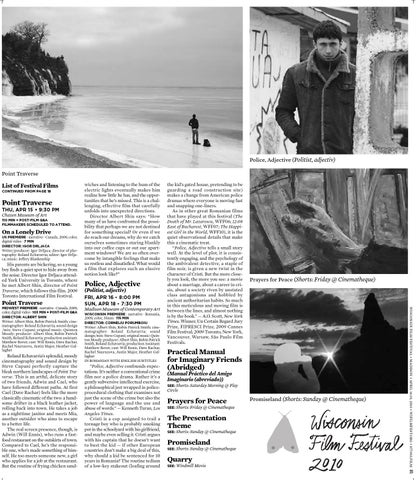 On a Lonely Drive

His parents are bickering, so a young boy finds a quiet spot to hide away from the noise. Director Igor Drljaca attended York University in Toronto, where he met Albert Shin, director of Point Traverse, which follows this film. 2009 Toronto International Film Festival.

Roland Echavarria’s splendid, moody cinematography and sound design by Steve Cupani perfectly capture the bleak northern landscapes of Point Traverse. This is an artful, delicate story of two friends, Adwin and Cael, who have followed different paths. At first Cael (Dave Rachar) feels like the more classically cinematic of the two: a handsome drifter in a black leather jacket, rolling back into town. He takes a job as a nighttime janitor and meets Mia, another outsider who aims to escape to a better life. The real screen presence, though, is Adwin (Will Ennis), who runs a fastfood restaurant on the outskirts of town. Compared to Cael, he’s the responsible one, who’s made something of himself. He too meets someone new, a girl who applies for a job at the restaurant. But the routine of frying chicken sand-

“Police, Adjective confounds expectations. It’s neither a conventional crime film nor a police drama. Rather it’s a gently subversive intellectual exercise, a philosophical jest wrapped in policeprocedural clothing that examines not just the scene of the crime but also the power of language and the use and abuse of words.” — Kenneth Turan, Los Angeles Times. Cristi is a cop assigned to trail a teenage boy who is probably smoking pot in the schoolyard with his girlfriend, and maybe even selling it. Cristi argues with his captain that he doesn’t want to bust the kid — if other European countries don’t make a big deal of this, why should a kid be sentenced for 10 years in Romania? The routine tedium of a low-key stakeout (loafing around

the kid’s gated house, pretending to be guarding a road construction site) makes a change from American police dramas where everyone is moving fast and snapping one-liners. As in other great Romanian films that have played at this festival (The Death of Mr. Lazarescu, WFF06; 12:08 East of Bucharest, WFF07; The Happiest Girl in the World, WFF10), it is the quiet observational details that make this a cinematic treat. “Police, Adjective tells a small story well. At the level of plot, it is consistently engaging, and the psychology of the ambivalent detective, a staple of film noir, is given a new twist in the character of Cristi. But the more closely you look, the more you see: a movie about a marriage, about a career in crisis, about a society riven by unstated class antagonisms and hobbled by ancient authoritarian habits. So much in this meticulous and moving film is between the lines, and almost nothing is by the book.” — A.O. Scott, New York Times. Winner, Un Certain Regard Jury Prize, FIPRESCI Prize, 2009 Cannes Film Festival; 2009 Toronto, New York, Vancouver, Warsaw, São Paulo Film Festivals.

wiches and listening to the hum of the electric lights eventually makes him realize how little he has, and the opportunities that he’s missed. This is a challenging, effective film that carefully unfolds into unexpected directions. Director Albert Shin says: “How many of us have confronted the possibility that perhaps we are not destined for something special? Or even if we do reach our dreams, why do we catch ourselves sometimes staring blankly into our coffee cups or out our apartment windows? We are so often overcome by intangible feelings that make us restless and dissatisfied. What would a film that explores such an elusive notion look like?”