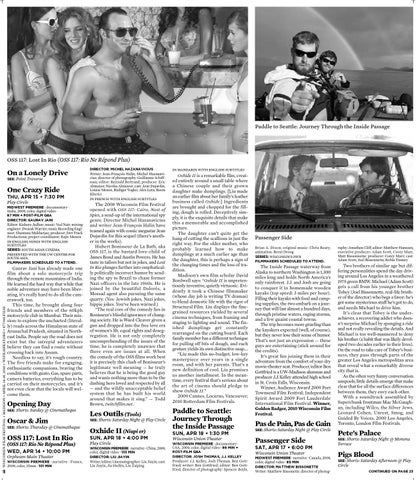 Paddle to Seattle: Journey Through the Inside Passage

Gaurav Jani has already made one film about a solo motorcycle trip through the remote mountains of India. He learned the hard way that while that noble adventure may have been liberating, it’s really hard to do all the camerawork, too. This time, he brought along four friends and members of the 60kph motorcycle club in Mumbai. Their mission: to explore the uncharted (literally) roads across the Himalayan state of Arunachal Pradesh, situated in Northeast India. People say the road does not exist but the intrepid adventurers believe they can find a route without crossing back into Assam. Needless to say, it’s rough country. The five friends make for engaging, enthusiastic companions, braving the conditions with gusto. Gas, spare parts, camera batteries, everything has to be carried on their motorcycles, and it’s not even clear that the locals will welcome them.

The 2008 Wisconsin Film Festival opened with OSS 117: Cairo, Nest of Spies, a send-up of the international spy genre. Director Michel Hazanavicius and writer Jean-François Halin have teamed again with comic megastar Jean Dujardin for this sequel (there’s another in the works). Hubert Bonisseur de La Bath, aka OSS 117, is the bastard love-child of James Bond and Austin Powers. He has taste in tailors but not in jokes, and Lost In Rio plunges further into emphatically politically incorrect humor by sending the spy to Brazil to chase former Nazi officers in the late 1960s. He is joined by the beautiful Dolorès, a Mossad agent also pursuing the same quarry. (Yes: Jewish jokes, Nazi jokes, hippie jokes. You’ve been warned.) “The real core of the comedy lies in Bonisseur’s blissful ignorance of changing society. He is Ward Cleaver given a gun and dropped into the free love era of women’s lib, equal rights and desegregation. He is not only completely uncomprehending of the issues of the time, he is completely unaware that there even are issues at all. When the comedy of the OSS films work best it is precisely this clash of Bonisseur’s legitimate well meaning — he truly believes that he is being the good guy and wants nothing more than to be the dashing hero loved and respected by all — and the wildly unacceptable belief system that he has built his world around that makes it sing.” — Todd Brown, twitchfilm.net.

IN MANDARIN WITH ENGLISH SUBTITLES

Oxhide II is a remarkable film, created entirely around a small table where a Chinese couple and their grown daughter make dumplings. [Liu made an earlier film about her family’s leather business called Oxhide.] Ingredients are brought and chopped for the filling, dough is rolled. Deceptively simply, it is the exquisite details that make this a memorable and accomplished picture. The daughter can’t quite get the hang of cutting the scallions in just the right way. For the older mother, who probably learned how to make dumplings at a much earlier age than the daughter, this is perhaps a sign of the changing times and the loss of tradition. Madison’s own film scholar David Bordwell says: “Oxhide II is unpretentiously inventive, quietly virtuosic. Evidently it took a Chinese filmmaker (whose day job is writing TV dramas) to blend domestic life with the rigor of Structural Film. Liu displays the finegrained resources yielded by several cinema techniques, from framing and staging to lighting and sound. The finished dumplings get constantly rearranged on the cutting board. Each family member has a different technique for pulling off bits of dough, and each gesture yields its own distinctive snap.... “Liu made this no-budget, low-key masterpiece over years in a single room, and with her parents. That’s a new definition of cool. Liu promises us another installment. In the meantime, every festival that’s serious about the art of cinema should pledge to show Oxhide II.” 2009 Cannes, Locarno, Vancouver; 2010 Rotterdam Film Festivals.

The Inside Passage waterway from Alaska to northern Washington is 1,300 miles long and holds North America’s only rainforest. J.J. and Josh are going to conquer it in homemade wooden kayaks (top speed: 3 miles per hour). Filling their kayaks with food and camping supplies, the two embark on a journey that will last almost a hundred days, through pristine waters, raging storms, and a few quaint coastal towns. The trip becomes more grueling than the kayakers expected (well, of course), but they never lose their sense of humor. That’s not just an expression — these guys are entertaining (stick around for the credits). It’s great fun joining them in their adventure from the comfort of your dry movie-theater seat. Producer/editor Ben Gottfried is a UW-Madison alumnus and producer J.J. Kelley attended high school in St. Croix Falls, Wisconsin. Winner, Audience Award 2009 Port Townsend Film Festival; Independent Spirit Award 2009 Fort Lauderdale International Film Festival. Winner, Golden Badger, 2010 Wisconsin Film Festival.

Two brothers of similar age but differing personalities spend the day driving around Los Angeles in a weathered 1975 green BMW. Michael (Adam Scott) gets a call from his younger brother Tobey (Joel Bissonnette, real-life brother of the director) who begs a favor: he’s got some mysterious stuff he’s got to do, and needs Michael to drive him. It’s clear that Tobey is the underachiever, a recovering addict who doesn’t surprise Michael by sponging a ride and not really revealing the details. And Michael is too well-mannered to deny his brother (a habit that was likely developed two decades earlier in their lives). On the road to take care of Tobey’s business, they pass through parts of the greater Los Angeles metropolitan area that reveal what a remarkably diverse city that is. As the often very funny conversation unspools, little details emerge that make clear that for all the surface differences between them, they envy each other. With a soundtrack assembled by Superchunk frontman Mac McGaughan, including Wilco, the Silver Jews, Leonard Cohen, Unrest, Smog, and Guided By Voices. 2009 Los Angeles, Toronto, London Film Festivals.