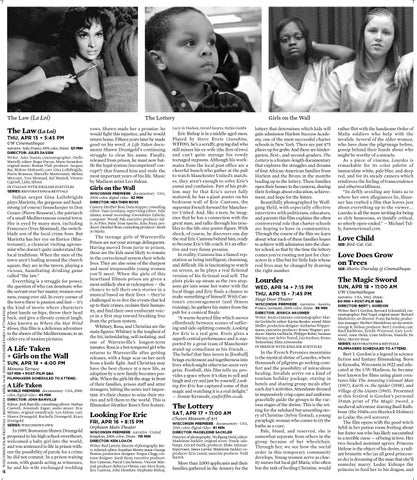 Italian sexpot Gina Lollobrigida plays Marietta, the gorgeous and headstrong (of course) housekeeper to Don Cesare (Pierre Brasseur), the patriarch of a small Mediterranean coastal town. She is eyed by many men, including Francesco (Yves Montand), the switchblade son of the local crime boss. But Marietta has her eye on Enrico (Mastroianni), a cleancut visiting agronomist who doesn’t quite understand the local traditions. When the men of the town aren’t loafing around the church square, they are in the tavern, playing a vicious, humiliating drinking game called “the law.” Everything is a struggle for power, the question of who can dominate who: the servant over her master, women over men, young over old. In every corner of the town there is passion and lust — it’s the kind of movie where characters plant hands on hips, throw their head back, and give a throaty cynical laugh. Also known as Where the Hot Wind Blows, this film is a delicious adventure to the shores of the Mediterranean, to an older era of motion pictures.

In 1989, Bostonian Shawn Drumgold proposed to his high school sweetheart, welcomed a baby girl into the world, and was sentenced to life in prison without the possibility of parole for a crime he did not commit. In a prison waiting room, with guards acting as witnesses, he and his wife exchanged wedding

vows. Shawn made her a promise: he would fight this injustice, and he would return home. Fifteen years later he made good on his word. A Life Taken documents Shawn Drumgold’s continuing struggle to clear his name. Finally, released from prison, he must now battle the legal system (incompetent? corrupt?) that framed him and stole the most important years of his life. Music by Madison artist Leo Sidran.

Girls on the Wall

The teenage girls of Warrenville Prison are not your average delinquents. Having moved from juvie to prison, these are the kids most likely to remain in the correctional system their whole lives. They are also some of the sharpest and most irrepressible young women you’ll meet. When the girls of this heartland Illinois prison are given a most unlikely shot at redemption — the chance to tell their own stories in a musical based on their lives — they’re challenged to re-live the events that led up to their crimes, reclaim their humanity, and find their own exuberant voices in a first step toward breaking free from the prison system. Whitney, Rosa, and Christina are the main figures. Whitney is the toughest of the lot, intimidating, self-isolating, and one of Warrenville’s longest-term inmates. Rosa is a hot-tempered girl who returns to Warrenville after getting releases, with a huge scar on her neck from a knife fight. And Christina may have the best chance at a new life, as adoption by a new family becomes possible. When the girls hit the stage in front of their families, prison staff and utter strangers, hitting the notes isn’t important: it’s their chance to seize their stories and tell them to the world. This is filmmaker Heather Ross’s first feature.

Eric Bishop is in a middle-aged mess. Played by Steve Evets (Sunshine, WFF09), he’s a scruffy, graying dad who still misses his ex-wife (the first of two) and can’t quite manage his rowdy teenaged stepsons. Although his workmates from the local post office are a cheerful bunch who gather at the pub to watch Manchester United’s matches, they aren’t enough to solve Eric’s ennui and confusion. Part of his problem may be that Eric’s never fully matured; he has a giant poster on his bedroom wall of Eric Cantona, the superstar French forward for Manchester United. And, like a teen, he imagines that he has a connection with the great man, and talks through his troubles to the life-size poster figure. With shock, of course, he discovers one day the real Eric Cantona behind him, ready to become Eric’s life coach. It’s an effective and very funny premise. In reality, Cantona has a famed reputation as being intelligent, charming, and difficult. He is fascinating to watch on screen, as he plays a real fictional version of his fictional real self. The plots picks up steam as the two stepsons get into some hot water with the local thugs and Eric finds a chance to make something of himself. With Cantona’s encouragement (and fitness training), he gathers his mates from the pub for a comical finale. “A warm-hearted film which moves effortlessly between scenes of suffering and side-splitting comedy, Looking For Eric is a real gem. Evets gives a superb central performance and is supported by a great team of Manchester stand-up comedians as his friends.... The belief that fans invest in [football] brings excitement and togetherness into lives which might otherwise seem very grim. Football, this film tells us, provides a space where it’s okay to yell and laugh and cry and just be yourself. Looking For Eric has captured some of that magic and watching it is a real delight.” — Jennie Kermode, eyeforfilm.co.uk.

More than 3,000 applicants and their families gathered in the Armory for the

Girls on the Wall lottery that determines which kids will gain admission Harlem Success Academy, one of the most successful charter schools in New York. There are just 475 places up for grabs. And these are kindergarten, first-, and second-graders. The Lottery is a feature-length documentary that explores the struggles and dreams of four African-American families from Harlem and the Bronx in the months leading up to the lottery. These families open their homes to the cameras, sharing their feelings about education, achievement, and hope for the future. Beautifully photographed by Wolfgang Held, with especially effective interviews with politicians, educators, and parents this film explains the often controversial role that charter schools are hoping to have in communities. Through the course of the film we learn about what each of these families hopes to achieve with admission into the charter school, so that by the time the lottery comes you’re rooting not just for characters in a film but for little kids whose real lives may be changed by drawing the right number.

rather flirt with the handsome Order of Malta soldiers who help with the invalids. Several of the older women, who have done the pilgrimage before, gossip behind their hands about who might be worthy of a miracle. As a piece of cinema, Lourdes is remarkable for its color palette of immaculate white, pale blue, and deep red, and for its steady camera which reinforces the feeling of transcendence and otherworldliness. “In deftly avoiding any hints as to where her own allegiances lie, Hausner has crafted a film that leaves just about everything up to the viewer.... Lourdes is all the more inviting for being so slyly humorous, so timidly critical, so utterly open-ended.” — Michael Tully, hammertonail.com.

In the French Pyrenées mountains is the mystical shrine of Lourdes, where thousands of pilgrims go seeking comfort and the possibility of miraculous healing. Invalids arrive on a kind of tourism holiday package, staying in hotels and sharing group meals after each day’s activities. Attendants dressed in impressively crisp capes and uniforms gracefully guide the groups to the various stages of the shrine. This is the setting for the subdued but unsettling story of Christine (Sylvie Testud), a young paraplegic woman who comes to try the baths as a cure. Pale, blond, and reserved, she is somewhat separate from others in the group because of her wheelchair. Through her, we see how the social order in this temporary community develops. Young women serve as charity nurses but local girl Maria, who often has the task of feeding Christine, would

Love Does Grow on Trees

Bert I. Gordon is a legend in science fiction and fantasy filmmaking. Born in Kenosha, Wisconsin in 1922 and educated at the UW-Madison, he became best known for films using giant creatures like The Amazing Colossal Man (1957), Earth vs. the Spider (1958), and Village of the Giants (1965). Presented at this festival is Gordon’s personal 35mm print of The Magic Sword, a medieval adventure starring Basil Rathbone (the 1940s-era Sherlock Holmes) as Lodac the evil sorcerer. The film opens with the good witch Sybil in her potion room fretting about her foster son who has likely succumbed to a terrible curse — of being in love. Her two-headed assistant agrees. Princess Helene is the object of his desire, a radiant brunette who (as all good princesses do) is dreaming of the man that she’ll someday marry. Lodac kidnaps the princess to feed her to his dragon, and