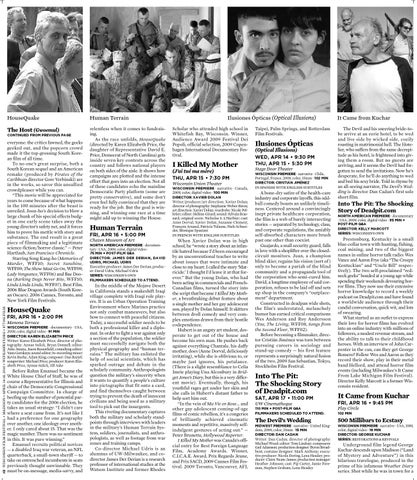 relentless when it comes to fundraising. As the race unfolds, HouseQuake (directed by Karen Elizabeth Price, the daughter of Representative David E. Price, Democrat of North Carolina) gets inside seven key contests across the country and follows national players on both sides of the aisle. It shows how campaigns are plotted and the intense effort that goes into an election. Not all of these candidates echo the mainline Democratic Party platform (some are pretty conservative), and some don’t even feel fully convinced that they are ready for the job. But the goal is winning, and winning one race at a time might add up to winning the House.

everyone: the critics fawned, the geeks geeked out, and the popcorn crowd made it the top-grossing South Korean film of all time. To no one’s great surprise, both a South Korean sequel and an American remake (produced by Pirates of the Caribbean director Gore Verbinski) are in the works, so savor this unsullied crowdpleaser while you can. “This movie will be appreciated for years to come because of what happens in the 100 minutes after the beast is unveiled. Joon-ho’s decision to blow a large chunk of his special effects budget in one early scene takes away the young director’s safety net, and it forces him to prove his mettle with story and substance. The end result is a great piece of filmmaking and a legitimate science-fiction/horror classic.” — Peter Hartlaub, San Francisco Chronicle. Starring Song Kang-ho (Memories of Murder, WFF10; Secret Sunshine, WFF09; The Show Must Go On, WFF09; Lady Vengeance, WFF06) and Bae Doona (Barking Dogs Never Bite, WFF10; Linda Linda Linda, WFF07). Best Film, 2006 Blue Dragon Awards (South Korean Oscars). 2006 Cannes, Toronto, and New York Film Festivals.

Before Rahm Emanuel became the White House Chief of Staff, he was of course a Representative for Illinois and chair of the Democratic Congressional Campaign Committee. In charge of beefing up the number of potential party candidates for the 2006 election, he takes an usual strategy: “I didn’t care where a seat came from. It’s not like I had a preference for one geography over another, one ideology over another. I only cared about 15. That was the magic number. There was no sentiment in this. It was pure winning.” Emanuel recruits political novices — a disabled Iraq war veteran, an NFL quarterback, a small-town sheriff — to take on entrenched incumbents in seats previously thought unwinnable. They 12 must be on-message, media-savvy, and

In the middle of the Mojave Desert in California stands a makeshift Iraqi village complete with Iraqi role players. It is an Urban Operation Training Environment where Marines practice not only combat maneuvers, but also how to connect with peaceful citizens. Today, a successful soldier needs to be both a professional killer and a diplomat. In order to fight a war against only a section of the population, the soldier must successfully navigate both the physical geography and “human terrains.” The military has enlisted the help of social scientists, which has sparked outrage and debate in the scholarly community. Anthropologists question the military’s sincerity when it wants to quantify a people’s culture into pictographs that fit onto a card, and find themselves caught between trying to prevent the death of innocent civilians and being used as a military tool to pick out the insurgents. This riveting documentary captures both the military and scholarly standpoints through interviews with leaders in the military’s Human Terrain System, soldiers, journalists, and anthropologists, as well as footage from war zones and training camps. Co-director Michael Udris is an alumnus of UW-Milwaukee, and codirector James Der Derian is a research professor of international studies at the Watson Institute and former Rhodes

When Xavier Dolan was in high school, he “wrote a story about an infantile hatred because I’d been encouraged by an unconventional teacher to write about issues that were intimate and close to my heart. I called the story ‘Matricide.’ I thought I’d leave it at that forever.” But the young Dolan, who had been acting in commercials and FrenchCanadian films, turned the story into the script that became I Killed My Mother, a breathtaking debut feature about a single mother and her gay adolescent son, played by Dolan himself. It skitters between droll comedy and very complex emotions drawn from their hostile codependence. Hubert is an angsty art student, desperate to get out of the house and become his own man. He pushes back against everything Chantale, his daffy mother, does (Anne Dorval, deliciously irritating), while she is oblivious to, or maybe just ignores, his petulance. (There is a slight resemblance to Celia Imrie playing Una Alconbury in Bridget Jones’s Diary, but this is a very different movie). Eventually, though, his youthful rages get under her skin and she calls in Hubert’s distant father to help sort him out. “In the vein of Ma Vie en Rose... and other gay adolescent coming-of-age films of comic rebellion, it’s a congeries of brilliantly achieved cinematic moments and repetitive, massively selfindulgent gestures of acting out.” — Peter Brunette, Hollywood Reporter. I Killed My Mother was Canada’s official entry for Best Foreign Language Film, Academy Awards. Winner, C.I.C.A.E. Award, Prix Regards Jeune, and Prix SACD, 2009 Cannes Film Festival. 2009 Toronto, Vancouver, AFI,

A bone-dry satire of the health-care industry and corporate layoffs, this oddball comedy boasts an unlikely timeliness. Centered around a convincingly inept private healthcare corporation, the film is a web of barely intersecting stories — separated by technology, class, and corporate regulations, the amiably self-absorbed characters more brush past one other than coexist. Guajardo, a mall security guard, falls in love with a shoplifter over the closedcircuit monitors. Juan, a champion blind skier, regains his vision (sort of ) only to become a pariah of the blind community and a propaganda tool of the corporation who semi-cured him. David, a longtime employee of said corporation, refuses to be laid off and sets up shop in the company’s “outplacement” department. Constructed in deadpan wide shots, the film’s understated, melancholy humor has earned critical comparisons Wes Anderson and Roy Andersson (You, The Living, WFF08, Songs from the Second Floor, WFF02). Before becoming a filmmaker, director Cristián Jiménez was torn between pursuing careers in sociology and stand-up comedy — his first feature represents a surprisingly natural fusion of the two. 2009 San Sebastian, Tokyo, Stockholm Film Festival.

It Came from Kuchar The Devil and his sneering bride-tobe arrive at an eerie hotel, to be wed and live side by wicked side, cozily roasting in matrimonial hell. The Hotelier, who suffers from the same decrepitude as his hotel, is frightened into giving them a room. But no guests are arriving, and it seems the Devil had forgotten to send the invitations. Now he’s desperate, for he’ll do anything to wed and bed his sexy bride. Told in rhyme by an all-seeing narrator, The Devil’s Wedding is director Dan Cadan’s first solo short film.

Prestonburg, Kentucky is a small blue-collar town with hunting, fishing, coal mining, and two of the biggest names in online horror talk radio: Wes Vance and Aaron Frye (aka “The Creepy Kentuckian” and “Uncle Bill” respectively). The two self-proclaimed “redneck geeks” bonded at a young age while spending their weekends devouring horror films. They now use their extensive horror knowledge to record a weekly podcast on Deadpit.com and have found a worldwide audience through their candid conversation, quick wit, and lots of swearing. What started as an outlet to express their love for horror films has evolved into an online industry with millions of followers, a modest revenue stream, and the ability to talk to their childhood heroes. With an interview of John Carpenter in the can, can they get George Romero? Follow Wes and Aaron as they record their show, play in their metal band Hellord, and attend horror film events (including Milwaukee’s It Came From Lake Michigan Film Festival). Director Kelly Marcott is a former Wisconsin resident.

Underground film legend George Kuchar descends upon Madison (“Land of Mystery and Adventure”) in this hilarious travelogue, produced in the prime of his infamous Weather Diary series. Shot while he was in town for a