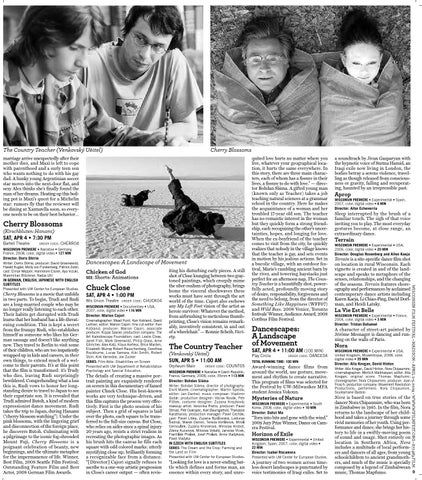 marriage arrive unexpectedly after their mother dies, and Maxi is left to cope with parenthood and a surly teen son who wants nothing to do with his gay dad. A hunky young Argentinian soccer star moves into the next-door flat, and sexy Alex thinks she’s finally found the man of her dreams. Heating up this boiling pot is Maxi’s quest for a Michelin star: rumors fly that the reviewer will be dining at Xantarella soon, so everyone needs to be on their best behavior…

Dancescapes: A Landscape of Movement

Cherry Blossoms is a movie that unfolds in two parts. To begin, Trudi and Rudi are a long-married couple who may be no longer really listening to each other. Their habits get disrupted with Trudi learns that her husband has a life-threatening condition. This is kept a secret from the frumpy Rudi, who establishes himself as someone who likes his German sausage and doesn’t like anything new. They travel to Berlin to visit some of their children, who are too impatiently wrapped up in kids and careers, in their own things, to extend much of a welcome to their parents. It’s at this point that the film is transformed: it’s Trudy who dies, leaving Rudi surprisingly bewildered. Comprehending what a loss this is, Rudi vows to honor her longstanding desire to travel to Japan to see their expatriate son. It is revealed that Trudi admired Butoh, a kind of modern expressionist dance movement. Rudi takes the trip to Japan, during Hanami (“cherry blossom watching”). Under the pink blossoms, with the lingering grief and disconnection of the foreign place, he discovers Butoh. Culminating with a pilgrimage to the iconic fog-shrouded Mount Fuji, Cherry Blossoms is a poignant celebration of beauty, new beginnings, and the ultimate metaphor for the impermanence of life. Winner, Best Film, 2008 Seattle Film Festival; Outstanding Feature Film and Best Actor, 2008 German Film Awards.

The details of creating a massive portrait painting are exquisitely rendered on screen in this documentary of famed painter Chuck Close. His best-known works are very technique-driven, and this film captures the process very effectively. First is the photo session of his subject. Then a grid of squares is laid over the photo, each square to be transferred to the full-size canvas. But Close, who relies on aides since a spinal injury 20 years ago, resists a strict realism in recreating the photographic images. As his brush hits the canvas he fills each square with odd colored marks: utterly mystifying close up; brilliantly forming a recognizable face from a distance. “[Director] Cajori signally refuses to ascribe to a one-way artistic progression in Close’s career output — often revis-

iting his disturbing early pieces. A still shot of Close lounging between two graytoned paintings, which creepily mime the uber-realism of photography, brings home the visceral shockwaves these works must have sent through the art world of the time. Cajori also eschews any My Left Foot vision of the artist as heroic survivor: Whatever the method, from airbrushing to meticulous thumbprinting, Close’s vision remains remarkably, inventively consistent, in and out of a wheelchair.” — Ronnie Scheib, Variety.

“Looking for love is a never-ending battle which defines and forms man, an essence within every story, and unre-

Sleep interrupted by the brush of a familiar touch. The sigh of that voice inviting you to play. The most everyday gestures become, at close range, an extraordinary dance.

Terrain is a site-specific dance film shot on location in rural Wisconsin. Each vignette is created in and of the landscape and speaks to metaphors of the senses, relationships, and the changing of the seasons. Terrain features choreography and performances by acclaimed contemporary dance artists including Karen Kaeja, Li Chiao-Ping, David Dorfman, and Heidi Latsky.

A character of street-art painted by Jérôme Mesnager is dancing and running on the walls of Paris.

a soundtrack by Jivan Gasparyan with the hypnotic voice of Surma Hamid, an Iraqi exile now living in London, the bodies betray a serene violence, travelling as though released from consciousness or gravity, falling and recuperating, haunted by an irrepressible past.

Award-winning dance films from around the world, use gesture, movement and rhythm to create narrative. This program of films was selected for the Festival by UW-Milwaukee MFA student Jessica Vokoun.

“Torn into bits and gone with the wind.” 2009 Jury Prize Winner, Dance on Camera Festival.

A journey of two women across timeless desert landscapes is punctuated by voice testimonies of Iraqi exiles. Set to

quited love hurts no matter where you live, whatever your geographical location, it hurts the same everywhere. In this story, there are three main characters, each of whom has a fissure in their lives, a fissure to do with love.” — director Bohdan Sláma. A gifted young man (known only as Teacher) takes a job teaching natural sciences at a grammar school in the country. Here he makes the acquaintance of a woman and her troubled 17-year old son. The teacher has no romantic interest in the woman but they quickly form a strong friendship, each recognizing the other’s uncertainties, hopes, and longing for love. When the ex-boyfriend of the teacher comes to visit from the city, he quickly realizes that nobody in the village knows that the teacher is gay, and sets events in motion by his jealous actions. Set in a bucolic village, with an outdoor festival, Marie’s rambling ancient barn by the river, and towering haystacks just perfect for an afternoon nap, The Country Teacher is a beautifully shot, powerfully acted, profoundly moving story of desire, responsibility, forgiveness and the need to belong, from the director of Something Like Happiness (WFF07) and Wild Bees. 2008 Venice, Toronto festivals’ Winner, Audience Award, 2008 Cottbus Film Festival.

Nora is based on true stories of the dancer Nora Chipaumire, who was born in Zimbabwe in 1965. In the film, Nora returns to the landscape of her childhood and takes a journey through some vivid memories of her youth. Using performance and dance, she brings her history to life in a swiftly-moving poem of sound and image. Shot entirely on location in Southern Africa, Nora includes a multitude of local performers and dancers of all ages, from young schoolchildren to ancient grandmothers, and much of the music is specially composed by a legend of Zimbabwean 9 music, Thomas Mapfumo.