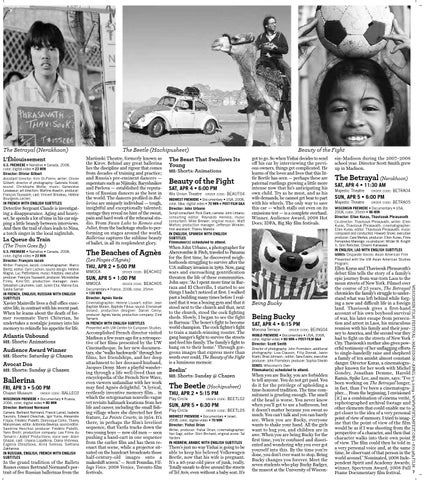 Detective Sergeant Claude is investigating a disappearance. Aging and heavyset, he spends a lot of time in his car nipping a little brandy between interviews. And then the trail of clues leads to Nina, a torch singer in the local nightclub.

The Beetle (Hachipusheet) Mariinski Theatre, formerly known as the Kirov. Behind any great ballerina lies the discipline and rigour that comes from decades of training and practice; and Russia’s pre-eminent dancers — superstars such as Nijinsky, Baryshnikov and Pavlova — established the reputation of Russian dancers as the best in the world. The dancers profiled in Ballerina are uniquely individual — tough, insightful and exceptionally talented; onstage they reveal no hint of the sweat, pain and hard work of the rehearsal studio. From Swan Lake to Romeo and Juliet, from the backstage studio to performing on stages around the world, Ballerina captures the sublime beauty of ballet, in all its resplendent glory.

The Beaches of Agnès

Xavier Mainville lives a dull office executive life, in contrast with his recent past. When he leams about the death of former roommate Yurri Chiterian, he undertakes a nostalgic joumey into his memory to rekindle his appetite for life.

Accomplished French director visited Madison a few years ago for a retrospective of her films presented by the UW Cinematheque. In her new documentary, she “walks backwards” through her films, her friendships, and her deep attachment to her deceased husband, Jacques Demy. More a playful wandering through a life well-lived than an encyclopedia of the French New Wave, even viewers unfamiliar with her work may find Agnès delightful. “A lyrical, restlessly inventive memory film… in which the octogenarian nouvelle-vague vet revisits hallmark locations from her life and career, including the small fishing village where she directed her first feature, La Pointe Courte, in 1954. It’s there, in perhaps the film’s loveliest sequence, that Varda tracks down the two young boys — now old men — seen pushing a hand-cart in one sequence from the earlier film and has them reenact that scene, while a projector situated on the handcart broadcasts those half-century-old images onto a makeshift screen.” — Scott Foundas, Village Voice. 2008 Venice, Toronto film festivals.

The Beast That Swallows Its Young SEE: Shorts: Animations

got to go. So when Yishai decides to send off his car by interviewing the previous owners, things get complicated. He learns of the loves and lives that this little Beetle has seen — perhaps these are paternal rustlings growing a little more intense now that he’s anticipating his own child. Try as he must, and as his wife demands, he cannot get bear to part with his wheels. The only way to save this car — which stalls out even on its emissions test — is a complete overhaul. Winner, Audience Award, 2008 Hot Docs; IDFA, Big Sky film festivals.

When John Urbano, a photographer for Abercrombie &amp; Fitch, traveled to Panama for the first time, he discovered neighborhoods struggling to survive after the U.S. military invasion in 1989. Now, gang wars and encroaching gentrification threaten the life of these communities. John says: “As I spent more time in Barraza and El Chorrillo, I started to see things I hadn’t noticed at first. I walked past a building many times before I realized that it was a boxing gym and that it stood next to the church and that, next to the church, stood the cock fighting sheds. Slowly, I began to see the fight in Barraza: The boxer’s fight to become world champion. The cock fighter’s fight to train a match-winning rooster. The gang banger’s fight to survive the streets and feed his family. The family’s fight to hang on to their home.” Through gorgeous images that express more than words ever could, The Beauty of the Fight is a luminous memoir.

When you are Bucky, you are forbidden to tell anyone. You do not get paid. You do it for the privilege of upholding a time-honored tradition. The time commitment is grueling enough. The smell of the head is worse. You never know when you’ll get to use a bathroom, but it doesn’t matter because you sweat so much. You can’t talk and you can barely see. When you are Bucky, everyone wants to shake your hand. All the girls want to hug you, and children are in awe. When you are being Bucky for the first time, you’re confused and disoriented and wondering why you ever got yourself into this. By the time you’re done, you don’t ever want to stop. Being Bucky changes you forever. Meet the seven students who play Bucky Badger, the mascot at the University of Wiscon-

There’s just no way Yishai is going to be able to keep his beloved Volkswagen Beetle, now that his wife is pregnant. It’s a 40-year-old piece of junk, really. Totally unsafe to drive around the streets of Tel Aviv, even without a baby seat. It’s

sin-Madison during the 2007–2008 school year. Director Scott Smith grew up in Madison.

Ellen Kuras and Thavisouk Phrasavath’s debut film tells the story of a family’s epic journey from war-torn Laos to the mean streets of New York. Filmed over the course of 23 years, The Betrayal chronicles the family’s struggle to understand what was left behind while forging a new and difficult life in a foreign land. Thavisouk gives a first-hand account of his own boyhood survival of war, his later escape from persecution and arrest in Laos, his miraculous reunion with his family and their journey to America, and the second war they had to fight on the streets of New York City. Thavisouk’s mother also gives powerful testimony of her unflagging efforts to single-handedly raise and shepherd a family of ten amidst almost constant danger. Director Kuras, a cinematographer known for her work with Michel Gondry, Jonathan Demme, Harold Ramis, Spike Lee, and more, says: “I’ve been working on The Betrayal longer, in fact, than I’ve been a cinematographer.… From the beginning, I envisioned [it] as a combination of cinema verité, rephotographed archival footage and other elements that could enable me to get closer to the idea of a very personal point of view of memory. I tried to imagine that the point of view of the film would be as if I was shooting from the perspective of a character, and then that character walks into their own point of view. The film could then be told in a very personal voice and, at the same time, be observant of that person in the world around.” Nominated, 2008 Independent Spirit and Academy Awards; winner, Spectrum Award, 2008 Full 7 Frame Documentary film festival.

Beauty of the Fight