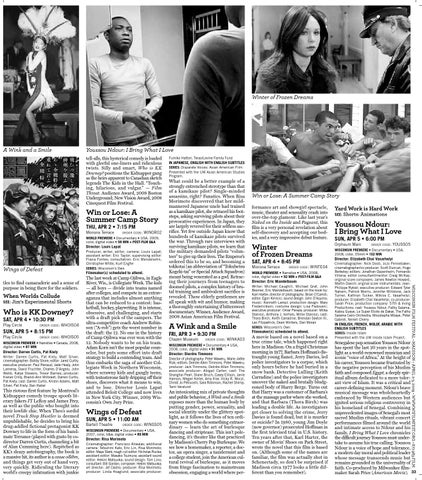 A Wink and a Smile

Youssou Ndour: I Bring What I Love tell-alls, this hysterical comedy is loaded with gleeful one-liners and ridiculous twists. Silly and smart, Who is KK Downey? positions the Kidnapper gang as the heirs apparent to Canadian sketch legends The Kids in the Hall. “Touching, hilarious, and vulgar.” — Film Threat. Audience Award, 2008 Boston Underground; New Vision Award, 2008 Cinequest Film Festival.

This riotous first feature by Montreal’s Kidnapper comedy troupe spoofs literary fakers JT LeRoy and James Frey, as well as the public who bought into their lowlife chic. When Theo’s sordid novel Truck Stop Hustler is deemed unpublishable, he decides to bring his drug-addled fictional protagonist KK Downey to life in the form of his bandmate Terrance (played with gusto by codirector Darren Curtis, channeling a bit of Alan Cumming here). Repitched as KK’s sleazy autobiography, the book is a massive hit, its author is a cause célèbre, and things get very out of hand very, very quickly. Ridiculing the literary world’s creepy infatuation with junkie

What could be a better example of a strongly entrenched sterotype than that of a kamikaze pilot? Single-minded assassins, right? Fanatics. When Risa Morimoto discovered that her mildmannered Japanese uncle had trained as a kamikaze pilot, she retraced his footsteps, asking surviving pilots about their provocative experiences. In Japan, they are largely revered for their selfless sacrifice. Yet few outside Japan know that hundreds of kamikaze pilots survived the war. Through rare interviews with surviving kamikaze pilots, we learn that the military demanded pilots “volunteer” to give up their lives. The Emperor’s ordered this to be so, and becoming a tokkotai (an abbreviation of “Tokubetsu Kogeki-tai” or Special Attack Squadron) meant being venerated as a god. Retracing their journeys from teenagers to doomed pilots, a complex history of brutal training and ambivalent sacrifice is revealed. These elderly gentlemen are all speak with wit and humor, making a thoroughly entertaining if bittersweet documentary. Winner, Audience Award, 2008 Asian American Film Festival.

An intoxicating mix of private thoughts and public behavior, A Wink and a Smile exposes more than the human body by putting gender, power, sexuality, and social identity under the glittery spotlight, as it follows the lives of ten ordinary women who do something extraordinary — learn the art of burlesque dancing and striptease. This isn’t poledancing, it’s theater like that practiced by Madison’s Cherry Pop Burlesque. We see how a homemaker, a reporter, a doctor, an opera singer, a taxidermist and a college student, join the American cultural revival of burlesque, as it moves from fringe fascination to mainstream obsession, engaging a world where per-

Win or Lose: A Summer Camp Story formance art and showgirl spectacle, music, theater and sensuality crash into over-the-top glamour. Like last year’s Naked on the Inside and Pageant, this film is a very personal revelation about self-discovery and accepting our bodies, and a very impressive debut feature.

A movie based on a novel based on a true crime tale, which happened right here in Madison. On a frigid Christmas morning in 1977, Barbara Hoffman’s distraught young fiancé, Jerry Davies, led police investigators to a corpse, which only hours before he had buried in a snow bank. Detective Lulling (Keith Carradine) and the police investigators uncover the naked and brutally bludgeoned body of Harry Berge. Turns out that Harry was a customer of Barbara’s at the massage parlor where she worked, and that Barbara (Thora Birch) was leading a double life. As investigators get closer to solving the crime, Jerry Davies is found dead, but it is murder or suicide? In 1980, young Jim Doyle (now governor) prosecuted Hoffman in the first televised trial in U.S. history. Ten years after that, Karl Harter, the owner of Movin’ Shoes on Park Street, wrote the novel that this film is based on. (Although some of the names are familiar, the film was actually shot in Schenectady, so don’t be surprised if Madison circa 1977 looks a little different than you remember).

tles to find camaraderie and a sense of purpose in being there for the soldiers.

The last week at Camp Ojibwa, in Eagle River, Wis., is Collegiate Week. The kids — all boys — divide into teams named after colleges, and compete in an extravaganza that includes almost anything that can be reduced to a contest: basketball, hockey, playwriting. It is intense, obsessive, and challenging, and starts with a draft pick of the campers. The ultra-competitive coach Andrew Robinson (“A-rob”) gets the worst number in the draft: the 12. No one in the history of Camp Ojibwa was ever won with the 12. Nobody wants to be on his team. Adam Korn isn’t the most popular counselor, but puts some effort into draft strategy to build a contending team. And thus embarks the saga of another Collegiate Week in Northern Wisconsin, where scrawny kids and gangly teens, with testosterone fairly dripping off their shoes, discovers what it means to win, and to lose. Director Louis Lapat attended Beloit College and now lives in New York City. Winner, 2009 Wisconsin’s Own Jury Prize.

Senegalese pop sensation Youssou Ndour has spent the last 20 years in the spotlight as a world-renowned musician and iconic “voice of Africa.” At the height of his career, Youssou became frustrated by the negative perception of his Muslim faith and composed Egypt, a deeply spiritual album dedicated to a more tolerant view of Islam. It was a critical and career-defining moment. Ndour’s brave musical message was wholeheartedly embraced by Western audiences but ignited serious religious controversy in his homeland of Senegal. Combining unprecedented images of Senegal’s most sacred Muslim rituals, vibrant concert performances filmed around the world and intimate access to Ndour and his family, I Bring What I Love chronicles the difficult journey Youssou must undertake to assume his true calling. Youssou Ndour is a voice of hope and tolerance, a modern day moral and political leader whose message transcends music but remains grounded in the universality of faith. Co-produced by Milwaukee filmmaker Sarah Price (American Movie). 33