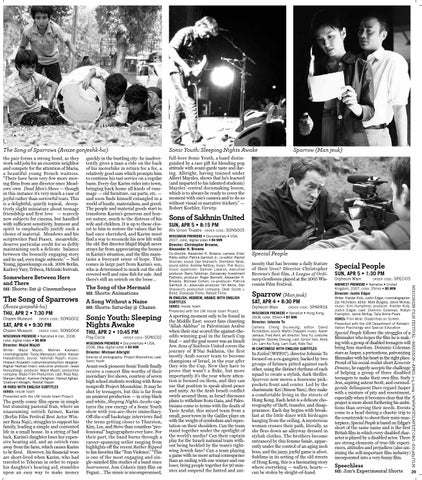 the pair forms a strong bond, as they work odd jobs for an eccentric neighbor and compete for the attention of Maria, a beautiful young French waitress. “There have been very few more moving films from any director since Meadows’ own Dead Man’s Shoes — though in this instance it’s very much a case of joyful rather than sorrowful tears. This is a delightful, quietly topical, deceptively slight miniature about teenage friendship and first love — scarcely new subjects for cinema, but handled with sufficient sensitivity, humour and spirit to emphatically justify such a choice of material. Meadows and his scriptwriter Paul Fraser, meanwhile, deserve particular credit for so deftly maintaining such a delicate balance between the bouncily engaging story and its sad, even tragic subtexts.” — Neil Young, jigsawlounge.co.uk. 2008 Berlin, Karlovy Vary, Tribeca, Helsinki festivals.

full-bore Sonic Youth, a band distinguished by a rare gift for blending pop attitude with avant-garde taste and daring. Albright, having trained under Albert Maysles, shows that he’s learned (and imparted to his talented students) Maysles’ central documaking lesson, which is to always be ready to cover the moment with one’s camera and to do so without visual or narrative trickery.” — Robert Koehler, Variety.

A Song Without a Name SEE: Shorts: Saturday @ Chazen

The Song of the Mermaid

The gently comic film opens in simple but stunning pastoral Iran, where an unassuming ostrich farmer, Karim (Berlin Film Festival Best Actor Winner Reza Naji), struggles to support his family, leading a simple and contented life in a small house. In a string of bad luck, Karim’s daughter loses her expensive hearing aid, and an ostrich runs away from the farm, which causes Karim to be fired. However, his financial woes are short-lived when Karim, who had traveled to Teheran in order to repair his daughter’s hearing aid, stumbles upon an easy way to make money

Avant-rock pioneers Sonic Youth finally receive a concert film worthy of their incendiary live shows, courtesy of seven high school students working with Reno nonprofit Project Moonshine. It may be shot by teenagers, but this is far from an amateur production — in crisp black and white, Sleeping Nights Awake captures the raw energy of a Sonic Youth show with you-are-there immediacy. Off-the-cuff backstage interviews find the teens getting closer to Thurston, Kim, Lee, and Steve than countless “professional” hagiographers ever have. For their part, the band burns through a career-spanning setlist ranging from highlights off the recent Rather Ripped to fan favorites like “Tom Violence.” “This is one of the most engaging and single-minded film studies of a band since Instrument, Jem Cohen’s 1999 film on Fugazi… The music is uncompromised,

A sporting moment only to be found in the Middle East: soccer fans chanting “Allah Akhbar” in Palestinian Arabic when their star scored the against-theodds winning goal in the Israeli Cup final — and the goal scorer was an Israeli Jew. Sons of Sakhnin United covers the journey of B’Nai Sakhnin, the first mostly Arab soccer team to become champions of Israel, in the year after they win the Cup. Now they have to prove that wasn’t a fluke, but more importantly it’s the year where attention is focused on them, and they can use that position to speak about peace and unity. As the Arab Israeli conflict swirls around them, as Israel discusses plans to withdraw from Gaza, and Palestinians come to terms with the death of Yasir Arafat, this mixed team from a small, poor town in the Galilee plays on with the weight of symbolism and expectation on their shoulders. Can the team stand together under the spotlight of the world’s media? Can their captain play for the Israeli national team without being heckled by the team’s rightwing Jewish fans? Can a team playing a game with no more actual consequence than an ending with one winner and one loser, bring people together for 90 minutes and suspend the hatred and ani-

Special People mosity that has become a daily feature of their lives? Director Christopher Browne’s first film, A League of Ordinary Gentlemen played at the 2005 Wisconsin Film Festival.

In Exiled (WFF07), director Johnnie To focused on a ex-gangster, backed by two groups of hitmen pitted against each other, using the distinct rhythms of each squad to create a stylish, dark thriller. Sparrow now moves a foursome pickpockets front and center. Led by the charismatic Kei (Simon Yam), they make a comfortable living in the streets of Hong Kong. Each heist is a delicate choreography of theft, transfer, and disappearance. Each day begins with breakfast at the little diner with birdcages hanging from the ceiling. A mysterious woman crosses their path, literally, as she flees down an alleyway dressed in stylish clothes. The brothers become entranced by this femme fatale, apparently under the control of an aging mob boss, and the jazzy, joyful game is afoot. Sublime in its setting of the old streets of Hong Kong, this is a fascinating story where everything — wallets, hearts — can be stolen by sleight-of-hand.

Somewhere Between Here and There

quickly in the bustling city: he inadvertently gives a man a ride on the back of his motorbike in return for a fee, a relatively good sum which prompts him to continue his taxi service on a regular basis. Every day Karim rides into town, bringing back home all kinds of rummage — old furniture, car parts, etc. — and soon finds himself entangled in a world of hustle, materialism, and greed. The people and material goods start to transform Karim’s generous and honest nature, much to the distress of his wife and children. It is up to those closest to him to restore the values that he had once cherished, and Karim must find a way to reconcile his new life with the old. But director Majid Majidi never strays far from appreciating the humor in Karim’s situation, and the film maintains a buoyant sense of hope. This comes in large part from Karim’s son, who is determined to muck out the old covered well and raise fish for sale. And there’s still an ostrich on the loose…

Special People follows the struggles of a filmmaker who hopes the film he is making with a group of disabled teenagers will bring him stardom. Dominic Coleman stars as Jasper, a pretentious, patronizing filmmaker with his heart in the right place. Proud of his social-realist short Koncrete Dreamz, he eagerly accepts the challenge of helping a group of three disabled teenagers to make their own film. Surly Jess, aspiring auteur Scott, and curmudgeonly delinquent Dave regard Jasper with a mixture of pity and resentment, especially when it becomes clear that the project is more about furthering his ambitions than serving their needs. Events come to a head during a chaotic trip to the countryside to shoot their mini-masterpiece. Special People is based on Edgar’s short of the same name and is the first British film in which every disabled character is played by a disabled actor. There are strong elements of true-life experiences, attitudes and prejudices (also satirizing the self-important film industry) incorporated into a very funny film.