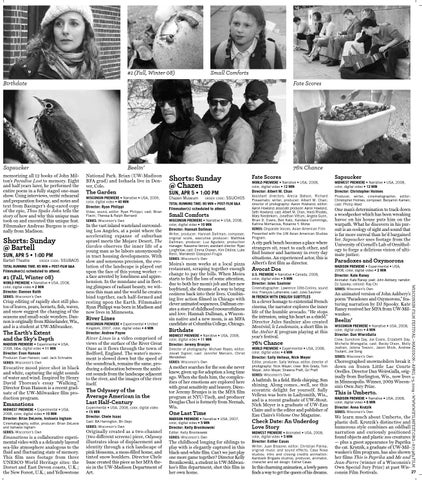 memorizing all 12 books of John Milton’s Paradise Lost to memory. Eight and half years larer, he performed the entire poem in a fully staged one-man show. Using interviews, verité rehearsal and preparation footage, and notes and text from Basinger’s dog-eared copy of the epic, Thus Spake John tells the story of how and why this unique man took on and executed this unique feat. Filmmaker Andreas Burgess is originally from Madison.

Crisp editing of rapidly shot still photos of leaves, pears, hornets, fish, waves, and snow suggest the changing of the seasons and small-scale wonders. Dannon is originally from Rhinelander, Wis., and is a student at UW-Milwaukee.

Emanations is a collaborative experimental video with a a delicately layered sea-like atmosphere analogous to the fluid and fluctuating state of memory. This film uses footage from three UNESCO World Heritage sites: the Dorset and East Devon coasts, U.K.; the New Forest, U.K.; and Yellowstone

In the vast inland wasteland surrounding Los Angeles, at a point where the accelerating expanse of suburban sprawl meets the Mojave Desert, The Garden observes the inner life of a young man as he labors anonymously in tract housing developments. With slow and sensuous precision, the evolution of the landscape is played out upon the face of this young worker — a face arrested by loneliness and apprehension. In the mundane and in fleeting glimpses of radiant beauty, we witness this man and the world he creates bind together, each half-formed and resting upon the Earth. Filmmaker Ryan Philippi was born in Madison and now lives in Minnesota.

River Lines is a video comprised of views of the surface of the River Great Ouse as it flows through the town of Bedford, England. The water’s movement is slowed down but the speed of the soundtrack, remains the same, producing a dislocation between the ambient sounds from the landscape adjacent to the river, and the images of the river itself.

The Odyssey of the Average American in the Last Half-Century Experimental • USA, 2008, color, digital video • 15 MIN

Originally created as a two-channel (two different screens) piece, Odyssey illustrates ideas of displacement and identity through a rich landscape of pink blossoms, a moss-filled house, and tinted snow boulders. Director Chele Isaac created this piece as her MFA thesis in the UW-Madison Department of Art.

Moira’s mom works at a local pizza restaurant, scraping together enough change to pay the bills. When Moira starts to feel the loss of some attention, due to both her mom’s job and her new boyfriend, she dreams of a way to bring coziness back into their lives. Combining live action filmed in Chicago with clever animated sequences, Dallman creates a story of childhood resourcefulness and love. Hannah Dallman, a Wisconsin native and a new mom, is an MFA candidate at Columbia College, Chicago.

A mother searches for the son she never knew, given up for adoption a long time ago. When she finds him, the complexities of her emotions are explored here with great sensitivity and bravery. Director Jeremy Brunjes is in the MFA film program at NYU-Tisch, and producer Douglas Choi is formerly from Neenah, Wis.

A city park bench becomes a place where strangers sit, react to each other, and find humor and harmony in every day situations. An experienced actor, this is Albert’s first film as director.

One man’s determination to track down a woodpecker which has been wreaking havoc on his house puts him on the warpath. What he discovers in his pursuit is an ecology of sight and sound that is far more surreal than he’d bargained for. Sapsucker uses footage from the University of Cornell’s Lab of Ornithology to forge a delirious vision of ultimate justice.

In a clever homage to existential French cinema, the narrator explores the inner life of the humble avocado. “He stops the intrusion, using his heart as a shield.” Director Jules Saulnier also created Montréal, le Lendemain, a short film in the Atelier K program playing at this year’s festival.

A bathtub. In a field. Birds chirping. Sun shining. Along comes...well, see this eccentric delight for yourself. Sally Velleux was born in Ladysmith, Wis., and is a recent graduate of UW-Stout. Nick Meyer is a graduate of UW-Eau Claire and is the editor and publisher of Eau Claire’s Volume One Magazine.

The childhood longing for siblings to play with is elegantly captured in this black-and-white film. Can’t we just play one more game together? Director Kelly Bronikowski, a student in UW-Milwaukee’s film department, shot this film in her own home.

In this charming animation, a lowly pawn finds a way to get the queen of his dreams.

We learn much about Umberto, the plastic doll. Krutzik’s distinctive and humorous style combines an oddball narration and curiously positioned found objects and plastic zoo creatures — plus a guest appearance by Paprika the cat. Krutzik, a graduate of UW-Milwaukee’s film program, has also shown her films This is Paprika and Me and Jean-Pierre (winner of a Wisconsin’s Own Special Jury Prize) at past Wis27 consin Film Festivals.