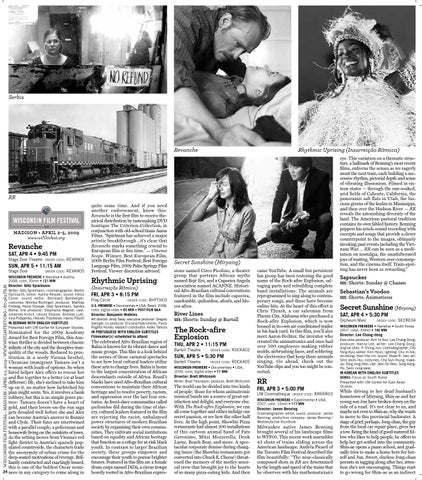 Nominated for the 2009 Academy Award for Best Foreign Film, this Austrian thriller is divided between chaotic infinity of the city and the deceptive tranquility of the woods. Reduced to prostitution in a seedy Vienna brothel, Ukranian immigrant Tamara isn’t a woman with loads of options. So when hired helper Alex offers to rescue her and flee together to a better (or at least different) life, she’s inclined to take him up on it, no matter how farfetched his plan might seem. Yes, it involves a bank robbery, but this is no simple genre picture: Tamara doesn’t have a heart of gold, and their lovers-on-the run saga gets derailed well before she and Alex can become Austria’s answer to Bonnie and Clyde. Their fates are intertwined with a parallel couple, a policeman and housewife living on the outskirts of town. As the setting moves from Vienna’s red light district to Austria’s sparsely populated countryside, the characters trade the anonymity of urban crime for the deep-seated motivations of revenge. Brilliantly constructed and exactingly lensed, this is one of the boldest Oscar nomi24 nees in any category to come along in

The celebrated Afro-Brazilian region of Bahia is known for its vibrant dance and music groups. This film is a look behind the scenes of those carnaval spectacles to see how local cultural leaders utilize these arts to change lives. Bahia is home to the largest concentration of African descendants outside of Africa. Brazil’s blacks have used Afro-Brazilian cultural conventions to maintain their African heritage and to resolve poverty, racism, and oppression over the last four centuries. As freed-slave communities called quilombos did during the time of slavery, cultural leaders featured in the film are rejecting the racist, unbalanced power structures of modern Brazilian society by organizing their own communities. They cultivate social institutions based on equality and African heritage that function as a refuge for at-risk black youth. In contrast to larger Brazilian society, these groups empower and encourage their youth to pursue brighter futures. Featured in this film are a female drum corps named DiDá, a circus troupe heavily rooted in Afro-Brazilian expres-

The world can be divided into two kinds of people: those for whom animatronic musical bands are a source of great satisfaction and delight, and everyone else. With The Rock-afire Explosion, we can all come together and either indulge our secret passion, or see how the other half lives. At the high point, Showbiz Pizza restaurants had almost 200 installations of this cartoon animal band of Fats Geronimo, Mitzi Mozzerella, Dook Larue, Beach Bear, and more. A spectacular corporate demise during changing times (the Showbiz restaurants got converted into Chuck E. Cheese) threatened the memory of the motley musical crew that brought joy to the hearts of so many pizza-eating kids. And then

came YouTube. A small but persistent fan group has been restoring the good name of the Rock-afire Explosion, salvaging parts and rebuilding complete band installations. The animals are reprogrammed to sing along to contemporary songs, and these have become online hits. At the heart of this effort is Chris Thrash, a car salesman from Phenix City, Alabama who purchased a Rock-afire Explosion, which is now housed in its own air-conditioned trailer in his back yard. In this film, you’ll also meet Aaron Fechter, the inventor who created the animatronics and once had over 300 employees making rubber molds, airbrushing faces, and soldering the electronics that keep these animals singing. Go ahead, check out the YouTube clips and you too might be converted.

Milwaukee native James Benning brought several of his landscape films to WFF05. This recent work assembles 43 shots of trains sliding across the American landscape. Andréa Picard of the Toronto Film Festival described the film beautifully: “The near-classically composed shots in RR are determined by the length and speed of the trains that he observes with his mathematician’s

eye. This variation on a thematic structure, a hallmark of Benning’s most recent films, enlivens the senses as we eagerly await the next train, each building a successive rhythm, pictorial depth and sense of vibrating illusionism. Filmed in sixteen states — through the sun-soaked, arid fields of Caliente, California, the panoramic salt flats in Utah, the luscious greens of the kudzu in Mississippi, and then over the Hudson River — RR reveals the astonishing diversity of the land. The American pastoral tradition contains its own fabled history. Benning peppers his synch-sound recording with excerpts and songs that provide a clever counterpoint to the images, obliquely invoking past events including the Vietnam War…. RR can be seen as a meditation on nostalgia, the unadulterated joys of waiting, Western over-consumption, and the cinema itself. Train-spotting has never been so rewarding.”

While driving to her dead husband’s hometown of Miryang, Shin-ae and her young son Jun have broken down on the side of a road. It’s not clear to us, and maybe not even to Shin-ae, why she wants to move to this provincial backwater. A stage of grief, perhaps. Jong-chan, the guy from the local car repair place, gives her a tow. Being the kind of good-natured fellow who likes to help people, he offers to help her get settled into the community. Shin-ae opens a piano school, and gradually tries to make a home here for herself and Jun. Sweet, clueless Jong-chan persists in tagging along after her, attention she’s not encouraging. Things start to go wrong for Shin-ae as an indirect