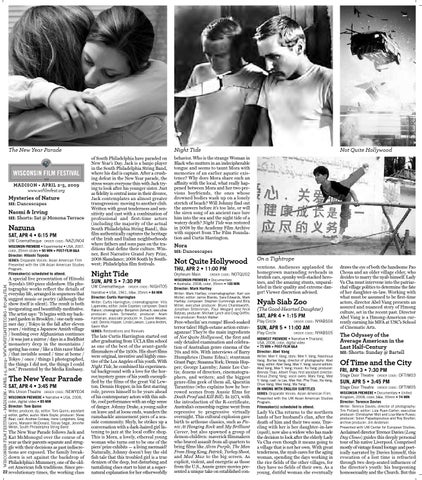 A special live presentation of Hitoshi Toyoda’s 580-piece slideshow. His photographic works reflect the details of everyday life, arranged in sequences that suggest music or poetry (although the show itself is silent). The result is both invigorating and beautifully meditative. The artist says: “It begins with my backyard garden in Brooklyn / one early summer day / Tokyo in the fall after eleven years / visiting a Japanese Amish village / bombing over Afghanistan continues / it was just a mirror / days in a Buddhist monastery deep in the mountains / spring has come / like a thin razor blade / that invisible sound / time at home / Tokyo / once / things I photographed, the things I did not, the things I could not.” Presented by the Media Embassy.

The New Year Parade follows Jack and Kat McMonogul over the course of a year as their parents separate and struggle with their decisions as past indiscretions are exposed. The family breakdown is set against the backdrop of Philadelphia’s Mummery, one of the oldest American folk traditions. Since pre22 revolutionary times, the working class

of South Philadelphia have paraded on New Year’s Day. Jack is a banjo player in the South Philadelphia String Band, where his dad is captain. After a crushing defeat in the New Year parade, the stress wears everyone thin with Jack trying to look after his younger sister. Just as fidelity is central issue in their divorce, Jack contemplates an almost greater transgression: moving to another club. Written with great tenderness and sensitivity and cast with a combination of professional and first-time actors (including the majority of the actual South Philadelphia String Band), this film authentically captures the heritage of the Irish and Italian neighborhoods where fathers and sons pass on the traditions that define their culture. Winner, Best Narrative Grand Jury Prize, 2008 Slamdance; 2008 South by Southwest; Philadelphia film festivals.

Not Quite Hollywood Orpheum Main

behavior. Who is the strange Woman in Black who mutters in an indecipherable tongue and seems to taunt Mora with memories of an earlier aquatic existence? Why does Mora share such an affinity with the local, what really happened between Mora and her two previous boyfriends, the ones whose drowned bodies wash up on a lonely stretch of beach? Will Johnny find out the answers before it’s too late, or will the siren song of an ancient race lure him into the sea and the night tide of a watery death? Night Tide was restored in 2008 by the Academy Film Archive with support from The Film Foundation and Curtis Harrington.

The late Curtis Harrington started out after graduating from UCLA film school as one of the best of the avant-garde filmmakers of the 1950s. His short films were original, inventive and highly emotive of the Los Angeles of his youth. With Night Tide, he combined his experimental background with a love for the horror/mystery genre of his youth exemplified by the films of the great Val Lewton. Dennis Hopper, in his first starring role, proves himself to be years ahead of his contemporary actors with this subtle, cool performance with an edgy sense of danger. Johnny Drake, a young sailor on leave and at loose ends, wanders the ramshackle amusement piers of a seaside community. Shyly, he strikes up a conversation with a dark-haired girl listening to jazz at the local coffee shop. This is Mora, a lovely, ethereal young woman who turns out to be one of the piers’ prize exhibits — a living mermaid! Naturally, Johnny doesn’t buy the old fish tale that this troubled girl is a true denizen of the deep, but disturbing and tantalizing clues start to hint at a supernatural explanation for her otherworldly

Free-wheelin’ sex romps! Blood-soaked terror tales! High-octane action extravaganzas! They’re the main ingredients of Not Quite Hollywood, the first and only detailed examination and celebration of Australian genre cinema of the 70s and 80s. With interviews of Barry Humphries (Dame Edna); stuntman Grant Page; Susanna York; Dennis Hopper; George Lazenby; Jamie Lee Curtis; dozens of directors, cinematographers, and writers; and the biggest genre-film geek of them all, Quentin Tarantino (who explains how he borrowed scenes from Aussie films for Death Proof and Kill Bill). In 1971, with the introduction of the R-certificate, Australia’s censorship regime went from repressive to progressive virtually overnight. This cultural explosion gave birth to arthouse classics, such as Picnic At Hanging Rock and My Brilliant Career, but also spawned a group of demon-children: maverick filmmakers who braved assault from all quarters to bring films like Alvin Purple, The Man From Hong Kong, Patrick, Turkey Shoot, and Mad Max to the big screen. As explicit, violent, and energetic as those from the U.S., Aussie genre movies presented a unique take on established con-

On a Tightrope ventions. Audiences applauded the homegrown marauding revheads in brutish cars, spunky well-stacked heroines, and the amazing stunts, unparalleled in their quality and extreme danger! Viewer discretion advised.

draws the eye of both the handsome Pao Choua and an older village elder, who decides to marry the nyab himself. Lady Va Cha must intervene into the patriarchal village politics to determine the fate of her daughter-in-law. Working with what must be assumed to be first-time actors, director Abel Vang presents an assured and nuanced story of Hmong culture, set in the recent past. Director Abel Vang is a Hmong-American currently earning his MFA at USC’s School of Cinematic Arts.

The Odyssey of the Average American in the Last Half-Century

Lady Va Cha returns to the northern lands of her husband’s clan, after the death of him and their two sons. Traveling with her is her daughter-in-law (nyab), now also a widow who has made the decision to look after the elderly Lady Va Cha even though it means going to a village that is not her own. With great tenderness, the nyab cares for the aging woman, spending the days working in the rice fields of the other villages, for they have no fields of their own. As a young, dutiful woman she eventually

Acclaimed director Terence Davies (Long Day Closes) guides this deeply personal tour of his native Liverpool. Comprised mostly of vintage found footage and poetically narrated by Davies himself, this evocation of a lost time is refracted through two deep-seated influences of the director’s youth: his burgeoning homosexuality and the Church. But this