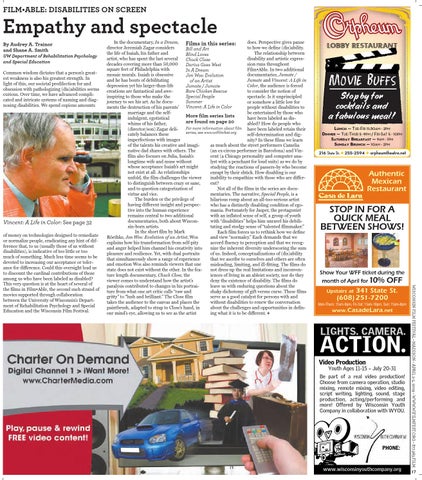 Empathy and spectacle By Audrey A. Trainor and Shane A. Smith UW Department of Rehabilitation Psychology and Special Education Common wisdom dictates that a person’s greatest weakness is also his greatest strength. In light of this, our societal predilection for and obsession with pathologizing (dis)abilities seems curious. Over time, we have advanced complicated and intricate systems of naming and diagnosing disabilities. We spend copious amounts

STOP IN FOR A QUICK MEAL BETWEEN SHOWS!

of money on technologies designed to remediate or normalize people, eradicating any hint of difference that, to us (usually those of us without disabilities), is indicative of too little or too much of something. Much less time seems to be devoted to increasing our acceptance or tolerance for difference. Could this oversight lead us to discount the cardinal contributions of those among us who have been labeled as disabled? This very question is at the heart of several of the films in Film•Able, the second such strand of movies supported through collaboration between the University of Wisconsin’s Department of Rehabilitation Psychology and Special Education and the Wisconsin Film Festival.

In the documentary, In a Dream, does. Perspective gives pause Films in this series: director Jeremiah Zagar considers to how we define (dis)ability. Bill and Art the life of Isaiah, his father and The relationship between Blind Loves artist, who has spent the last several disability and artistic expresChuck Close decades covering more than 50,000 sion runs throughout Darius Goes West square feet of Philadelphia with Film•Able. In two additional In A Dream mosaic murals. Isaiah is obsessive documentaries, Jumate / Jon Wos: Evolution and he has bouts of debilitating Jumate and Vincent: A Life in of an Artist depression yet his larger-than-life Color, the audience is forced Jumate / Jumate creations are fantastical and aweto consider the notion of Rare Chicken Rescue inspiring to those who make the Special People spectacle. Is it unprincipled Summer journey to see his art. As he docuor somehow a little low for Vincent: A Life in Color ments the destruction of his parents’ people without disabilities to marriage and the selfbe entertained by those who More film series lists indulgent, egotistical have been labeled as disare found on page 20 whims of his father, abled? How do people who For more information about film have been labeled retain their (director/son) Zagar deliseries, see www.wifilmfest.org cately balances these self-determination and digimperfections with images nity? In these films we learn of the talents his creative and imagias much about the street performers Camelia native dad shares with others. The (an ex-circus performer in Barcelona) and Vinfilm also focuses on Julia, Isaiah’s cent (a Chicago personality and computer analongtime wife and muse without lyst with a penchant for loud suits) as we do by whose acceptance Isaiah’s art might studying the reactions of passers-by who become not exist at all. As relationships enrapt by their shtick. How disabling is our unfold, the film challenges the viewer inability to empathize with those who are differto distinguish between crazy or sane, ent? and to question categorization of Not all of the films in the series are docuvirtue and vice. mentaries. The narrative, Special People, is a The burden or the privilege of hilarious romp about an all-too-serious artist having different insight and perspecwho has a distinctly disabling condition of egotive into the human experience mania. Fortunately for Jasper, the protagonist remains central to two additional with an inflated sense of self, a group of youth documentaries, both about Wisconwith “disabilities” helps him unravel his debilisin-born artists. tating and stodgy sense of “talented filmmaker.” In the short film by Mark Each film forces us to rethink how we define Röethke, Jon Wos: Evolution of an Artist, Wos and view “normalcy.” Each demands that we explains how his transformation from self-pity accord fluency to perception and that we recogand anger helped him channel his creativity into nize the inherent diversity underscoring the sum pleasure and resilience. Yet, with dual portraits of us. Indeed, conceptualizations of (dis)ability that simultaneously show a range of experience that we ascribe to ourselves and others are often and emotion Wos also reminds viewers that one misleading, limiting, and ill-fitting. The films do state does not exist without the other. In the feanot dress up the real limitations and inconventure length documentary, Chuck Close, the iences of living in an ableist society, nor do they viewer comes to understand how the artist’s deny the existence of disability. The films do paralysis contributed to changes in his portraileave us with enduring questions about the ture from what one art critic calls “raw and shaky dichotomy of gift versus curse. These films gritty” to “lush and brilliant.” The Close film serve as a good catalyst for persons with and takes the audience to the canvas and places the without disabilities to renew the conversation paintbrush, adapted to strap to Close’s hand, in about the challenges and opportunities in defining what it is to be different. ◆ our mind’s eye, allowing us to see as the artist