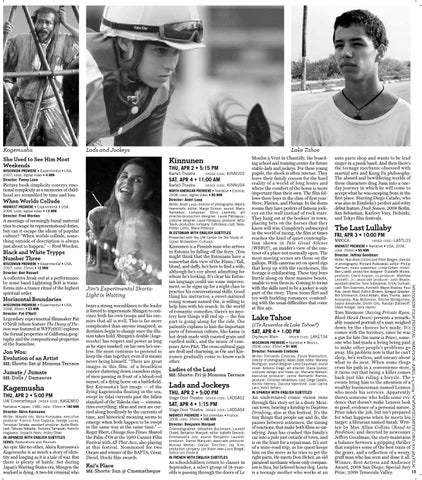 She Used to See Him Most Weekends

Picture book simplicity conveys emotional complexity as a memories of childhood are scrambled by time and loss.

A montage of seemingly banal material tries to escape its representational duties, but can it escape the idiom of popular culture? “When worlds collude, something outside of description is always just about to happen.” — Fred Worden.

Legendary experimental filmmaker Pat O’Neill (whose feature The Decay of Fiction was featured at WFF2003) explores the formal properties of California geography and the compositional properties of the frameline.

An epic like no other, Akira Kurosawa’s Kagemusha is as much a story of identity and longing as it is a tale of war. But there is plenty of battle. Set during Japan’s Warring States era, Shingen the warlord is dying. A two-bit criminal who

Jim’s Experimental Shorts: Light is Waiting bears a strong resemblance to the leader is forced to impersonate Shingen to convince both his own troops and his enemies that all is well. This is far more complicated than anyone imagined, as destinies begin to change once the illusion takes hold. Shingen’s double (kagemusha) has respect and power as long as he stays masked; on his own he’s useless. He must continue to pretend to keep the clan together, even if it means never being himself. “There are great images in this film: of a breathless courier clattering down countless steps, of men passing in front of a blood-red sunset, of a dying horse on a battlefield. But Kurosawa’s last image — of the dying kagemusha floating in the sea, swept by tidal currents past the fallen standard of the Takeda clan — summarizes everything: ideas and men are carried along heedlessly by the currents of time, and historical meaning seems to emerge when both happen to be swept in the same way at the same time.” — Roger Ebert, Chicago Sun-Times. Shared the Palm d’Or at the 1980 Cannes Film Festival with All That Jazz, also playing at this festival. Nominated for two Oscars and winner of the BAFTA, César, David, Hochi film awards.

Kinnunen is a Finnish man who arrives in Estonia by falling off the ferry. (You might think that the Estonians have a somewhat dim view of the Finns.) Tall, blond, and daffy, he’s here to find a wife, although he’s coy about admitting for whom he’s looking. It’s clear his Estonian language could use some improvement, so he signs up for a night class to practice his conversational skills. Good thing his instructor, a sweet-natured young woman named Õie, is willing to help him with his search. In the world of romantic comedies, there’s no mystery how things will end up — the fun part is going along for the ride. Õie patiently explains to him the important parts of Estonian culture, like kama (a hot drink made with roasted grain and curdled milk), and the music of composer Arvo Pärt. The cross-cultural gags are droll and charming, as Õie and Kinnunen gradually come to know each other.

As schoolchildren return to classes in September, a select group of 14-yearolds is passing through the doors of Le

An understated comic vision runs through this story set in a dusty Mexican town, bearing a kinship to Daytime Drinking, also at this festival. It’s the tiny things that people say and do, the pauses between sentences, the timing of reactions, that make both films so satisfying. Juan has crashed this family’s car into a pole just outside of town, and is on the hunt for a repairman. It’s sort of a mini-road trip, as his quest keeps him on the move as he tries to get the right parts. He meets Don Heber, an old paranoid mechanic whose only companion is Sica, his beloved boxer dog. Lucía is a teenage mother who works at an

auto parts shop and wants to be lead singer in a punk band. And then there’s the teenage mechanic obsessed with martial arts and Kung Fu philosophy. The absurd and bewildering worlds of these characters drag Juan into a oneday journey in which he will come to accept what he was escaping from in the first place. Starring Diego Cataño, who was also in Eimbcke’s perfect and witty debut feature, Duck Season. 2008 Berlin, San Sebastian, Karlovy Vary, Helsinki, and Tokyo film festivals.

A collective freak-out at a performance by noise band Lightning Bolt is transforms into a trance ritual of the highest spiritual order.

Moulin à Vent in Chantilly, the boarding school and training center for future stable-lads and jockeys. For these young pupils, the shock is often intense. They leave their family cocoon for the hard reality of a world of long hours and where the comfort of the horse is more important than their own. The film follows three boys in the class of first year: Steve, Flavien, and Florian. In the dorm rooms they have posters of famous jockeys on the wall instead of rock stars. They hang out at the bookies’ in town, placing bets on the horses that they know will win. Completely submerged in the world of racing, the film at times reaches the kind of quiet contemplation shown in Into Great Silence (WFF07), an insider’s view of the routines of a place not normally open. The most moving scenes are those on the gallops. With cameras set on speed rigs that keep up with the racehorses, the footage is exhilarating. These tiny boys hurtle along on these massive beasts, unable to rein them in. Coming to terms with the skills need to be a jockey is only part of the story. These teens flirt and toy with budding romances, contending with the usual difficulties that come at this age.

Tom Sizemore (Saving Private Ryan, Black Hawk Down) presents a remarkably nuanced portrait of a man weighed down by the choices he’s made. It’s comes with the territory, since he was a gun for hire (his name is Price), someone who had made a living being paid to make other people’s problems go away. His problem now is that he can’t sleep, he’s restless, and uneasy about what to do next. When some thugs cross his path in a convenience store, it turns out that being a killer comes back just like riding a bicycle. The events bring him to the attention of a wealthy businessman named Lennox who needs his services. Apparently there’s someone who holds some evidence that doesn’t make Lennox look so good, evidence of a personal nature. Price takes the job, but isn’t prepared for what happens when he meets his target: a librarian named Sarah. Written by Max Allan Collins (Road to Perdition) and directed by newcomer Jeffrey Goodman, the story maintains a balance between a gripping thriller that employs some of the best traits of the genre, and a reflection of a weary, gruff man who has seen and done it all. Winner, Best Actress and Audience Award, 2008 San Diego; Special Jury 15 Prize, 2008 Temecula Valley.