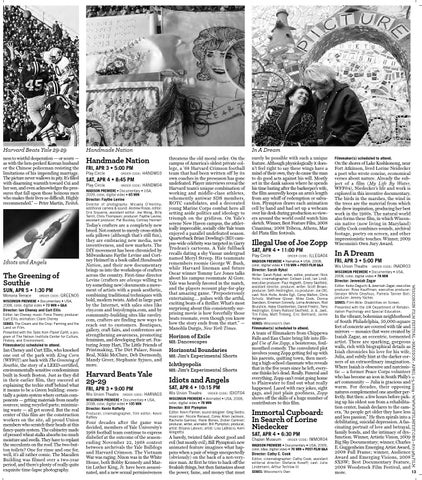 ness to wistful desperation — or scorn — as with the hen-pecked Korean husband or the Chinese policeman resisting the limitations of his impending marriage. The picture never wallows in pity. It’s filled with disarming warmth toward Cui and her son, and even acknowledges the pressures that fall upon those heinous men who makes their lives so difficult. Highly recommended.” — Peter Martin, Twitch.

Director: Ian Cheney and Curt Ellis Editor: Ian Cheney; music: Force Theory; producer: Curt Ellis; animation: Claire Cheney SERIES: The Cream and the Crop: Farming and the Land on Film. Presented with the Tales from Planet Earth, a program of The Nelson Institute Center for Culture, History, and Environment.

Ian Cheney and Curt Ellis, who knocked one out of the park with King Corn (WFF07) are back with The Greening of Southie, the story of a LEED-certified, environmentally sensitive condominium built in South Boston. Just as they did in their earlier film, they succeed at explaining the techie stuff behind what it means to be a Green building: essentially a points system where certain components — getting materials from nearby sources; using recycled parts; minimizing waste — all get scored. But the real center of this film are the construction workers on the site, all proud Union members who scratch their heads at this fancy-pants system. The cabinetry made of pressed wheat stalks absorbs too much moisture and swells. They have to replant the succulents on the roof. The two-button toilets? One for rinse and one for, well, it’s all rather comic. The Macallen Building was filmed over a two-year period, and there’s plenty of really quite exquisite time-lapse photography.

Today’s crafters are a completely new breed. Not content to merely cross-stitch sofa pillows (although that’s still fun), they are embracing new media, new inventiveness, and new markets. The DIY movement has been chronicled by Milwaukeans Faythe Levine and Cortney Heimerl in a book called Handmade Nation, and their new documentary brings us into the workshops of crafters across the country. First-time director Levine (crafters are always willing to try something new) documents a movement of artists with a punk aesthetic, combining traditional techniques with bold, modern twists. Aided in large part by the Internet, with sales sites like etsy.com and buyolympia.com, and by community-building sites like ravelry. com, crafters are finding new ways to reach out to customers. Boutiques, gallery, craft fairs, and conferences are strengthening awareness, promoting feminism, and developing their art. Featuring Jenny Hart, The Little Friends of Printmaking, The Dirt Palace, Susan Beal, Nikki McClure, Deb Dormondy, Mandy Greer, Stephanie Syjuco, and more.

threatens the old moral order. On the campus of America’s oldest private college, a ’68 Harvard Crimson football team that had been written off by its own coaches in the preseason has gone undefeated. Player interviews reveal the Harvard team’s unique combination of working and middle-class athletes, vehemently antiwar SDS members, ROTC candidates, and a decorated young Marine Corps combat hero all setting aside politics and ideology to triumph on the gridiron. On Yale’s serene New Haven campus, the athletically impeccable, socially elite Yale team enjoyed a parallel undefeated season. Quarterback Brian Dowling’s (BD) campus-wide celebrity was targeted in Garry Trudeau’s cartoons. A Yale fullback recalls dating a shy Vassar undergrad named Meryl Streep. His teammate remembers roomie George W. Bush, while Harvard lineman and future Oscar winner Tommy Lee Jones talks about his campus roommate Al Gore. Yale was heavily favored in the match, and the players recount play-for-play that amazing game. “Preposterously entertaining…. pulses with the artful, exciting beats of a thriller. What’s most surprising about this consistently surprising movie is how forcefully those beats resonate, even though you know how the story ends from the start.” — Manohla Dargis, New York Times.

Four decades after the game was decided, members of Yale University’s 1968 football team continue to express disbelief at the outcome of the seasonending November 22, 1968 contest between archrivals the Yale Bulldogs and Harvard Crimson. The Vietnam War was raging. Nixon was in the White House, both Bobby Kennedy and Martin Luther King, Jr. have been assassinated, and a new sexual permissiveness

A bawdy, twisted fable about good and evil (but mostly evil), Bill Plympton’s new animated feature imagines what happens when a pair of wings unexpectedly (obviously) on the back of a not-verynice man. At first he tries to hack off the freakish things, but then fantasizes about the power, fame, and money that must

surely be possible with such a unique feature. Although physiologically it doesn’t feel right to say these wings have a mind of their own, they do cause the man to do good acts against his will. Mostly set in the dank saloon where he spends his time lusting after the barkeeper’s wife, the film assuredly keeps an arm’s length from any whiff of redemption or salvation. Plympton draws each animation cell by hand and had set up a webcam over his desk during production so viewers around the world could watch him sketch. Winner, Best Feature Film, 2008 Cinanima; 2008 Tribeca, Athens, Mar del Plata film festivals.

A team of filmmakers from Chippewa Falls and Eau Claire bring life into Illegal Use of Joe Zopp, a boisterous, foulmouthed comedy. The convoluted plot involves young Zopp getting fed up with his parents, quitting town, then meeting a high-school classmate who reveals that in the five years since he left, everyone thinks he’s dead. Really. Funeral and everything. Zopp can’t resist going home to Plainwater to find out what really happened. Laced with racy jokes, sight gags, and just plain goofiness, Zopp shows off the skills of a huge number of contributors to this film.

On the shores of Lake Koshkonong, near Fort Atkinson, lived Lorine Neidecker a poet who wrote concise, economical verses about nature. Already the subject of a film (My Life By Water, WFF04), Niedecker’s life and work is explored in this inventive documentary. The birds in the marshes, the wind in the trees are the material from which she drew inspiration, producing her best work in the 1960s. The natural world also forms these film, in which Wisconsin native (now living in Maryland) Cathy Cook combines sounds, archival footage, poetry on screen, and other impressionistic touches. Winner, 2009 Wisconsin’s Own Jury Award.

The Greening of Southie

In the vibrant, bohemian neighborhood of South Philadelphia, 50,000-square feet of concrete are covered with tile and mirrors — mosaics that were created by Isaiah Zagar, an eccentric, tormented artist. These are sparking, gorgeous walls, rich with biographical details as Isiah chronicles his love for his wife, Julia, and subtly hint at the darker corners of an extraordinary imagination. Where Isaiah is obsessive and narcissistic — a former Peace Corps volunteer who has become an icon in South Philly’s art community — Julia is gracious and warm. For decades, their opposing natures complemented one another perfectly. But then: a few hours before picking up his oldest son from a rehabilitation center, Isaiah declares to the camera, “As people get older they have less and less passion.” He then spirals into a debilitating, suicidal depression. A fascinating portrait of love and betrayal, family bonds, and the intimacy of dysfunction. Winner, Artistic Vision, 2009 Big Sky Documentary; winner, Charles E. Guggenheim Emerging Artist Award, 2008 Full Frame; winner, Audience Award and Emerging Visions, 2008 SXSW; Best Documentary Feature, 2008 Woodstock Film Festival, and 13 more.