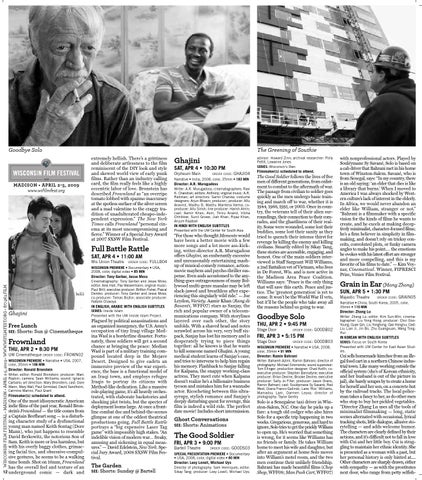 The Greening of Southie extremely hellish. There’s a grittiness and deliberate artlessness to the film reminiscent of the DIY look and style and skewed world view of early punk films. Rather than an industry calling card, the film really feels like a highly eccentric labor of love. Bronstein has described Frownland as “an overripe tomato lobbed with spazmo inaccuracy at the spotless surface of the silver screen and a mad valentine to the craggy tradition of unadulterated cheapo-independent expression.” The New York Times calls Frownland “personal cinema at its most uncompromising and fierce.” Winner of a Special Jury Award at 2007 SXSW Film Festival.

One of the most idiosyncratic American indie films of the past year, Ronald Bronstein’s Frownland — the title comes from a Captain Beefheart song — is a disturbing character study of a dysfunctional young man named Keith Sontag (Dore Mann), who just happens to resemble David Berkowitz, the notorious Son of Sam. Keith is more or less harmless, but with his overly baggy clothes, grimacing facial tics, and obsessive-compulsive gestures, he seems to be a walking time bomb. Shot on 16mm, Frownland has the overall feel and texture of an 12 underground comic — dark and

Plagued by political assassinations and an organized insurgency, the U.S. Army’s occupation of tiny Iraqi village Medina Wasl is a borderline disaster. Fortunately, these soldiers will get a second chance at bringing the peace: Median Wasl is part of a military training compound located deep in the Mojave Desert. Designed to give cadets an immersive preview of the war experience, the base is a functional model of an Iraqi town, and employs refugee Iraqis to portray its citizens with Method-like dedication. Like a massive role-playing game, it’s all heavily orchestrated, with elaborate backstories and shocking plot twists, but the specter of deployment looms large. At once a frontline combat doc and behind-the-scenes glimpse at one of the oddest theatrical productions going, Full Battle Rattle portrays a “big expensive Laser Tag game” with impossibly high stakes. “An indelible vision of modern war… freaky, amusing and sickening in equal measures.” — David Edelstein, New York. Special Jury Award, 2008 SXSW Film Festival.

“For those who thought Memento would have been a better movie with a few more songs and a lot more ass-kicking, writer-director A.R. Murugadoss offers Ghajini, an exuberantly excessive and unreasonably entertaining mashup of musical-comedy romance, actionmovie mayhem and psycho-thriller suspense. Even auds accustomed to the anything-goes outrageousness of many Bollywood multi-genre masalas may be left slack-jawed and breathless after experiencing this singularly wild ride.” — Joe Leydon, Variety. Aamir Khan (Rang de Basanti, WFF07) stars as Sanjay, the rich and popular owner of a telecommunications company. With storylines layered over each other, the story unfolds. With a shaved head and notes scrawled across his very, very buff sixpack, Sanjay has lost his memory and is desperately trying to piece things together: all he knows is that he wants to kill someone named Ghajini. A young medical student learns of Sanjay’s case, and tries to intervene to help him regain his memory. Flashback to Sanjay falling for Kalpana, the snappy working-class actress. They meet cute when Kalpana doesn’t realize he’s a billionaire business tycoon and mistakes him for a wannabe actor. Ricocheting between this ultrasyrupy, stylish romance and Sanjay’s deeply disturbing quest for revenge, this film is indeed a wild ride. The perfect date movie! Includes short intermission.

The Good Soldier follows the lives of five men of different generations, from enlistment to combat to the aftermath of war. The passage from civilian to soldier goes quickly as the men undergo basic training and march off to war, whether it is 1944, 1966, 1991, or 2003. Once in country, the veterans tell of their alien surroundings, their connection to their comrades, and the ghastliness of their reality. Some were wounded, some lost their buddies, some lost their sanity as they tried to quench their intense thirst for revenge by killing the enemy and killing civilians. Smartly edited by Sikay Tang, these stories are accessible, engaging, and honest. One of the main soldiers interviewed is Staff Sargeant Will Williams, a 2nd Battalion vet of Vietnam, who lives in De Forest, Wis. and is now active in the Madison Area Peace Coalition. Williams says: “Peace is the only thing that will save this earth. Peace and justice. The ‘greatest generation’ is yet to come. It won’t be the World War II vets, but it’ll be the people who take away all the reasons behind us going to war.

with nonprofessional actors. Played by Souléymane Sy Savané, Solo is based on a cab driver that Bahrani met in his home town of Winston-Salem. Savané, who is from Senegal, says: “In my country, there is an old saying: ‘an elder that dies is like a library that burns.’ When I moved to America I was always shocked by Western culture’s lack of interest in the elderly. In Africa, we would never abandon an elder like William, stranger or not.” “Bahrani is a filmmaker with a specific vision for the kinds of films he wants to create, and he excels at making deceptively minimalist, character-focused films; he’s a firm believer in simplicity in filmmaking, and doesn’t rely on tricksy conceits, convoluted plots, or funky camera angles to make his point.… the emotions he evokes with his latest effort are stronger and more compelling, and this is my favorite of his films to date.” — Kim Voynar, Cinematical. Winner, FIPRESCI Prize, Venice Film Festival.

Solo is a Senegalese taxi driver in Winston-Salem, N.C. One day he picks up a fare: a tough old codger who also hires Solo for a specific trip happening in two weeks. Gregarious, generous, and hard to ignore, Solo tries to get the prickly William to open up. He’s worried that something is wrong, for it seems like Williams has no friends or family. He takes William home to meet his wife and daughter, but after an argument at home Solo moves into William’s motel room, and the two men continue their unlikely friendship. Bahrani has made beautiful films (Chop Shop, WFF08; Man Push Cart, WFF07)

Cui sells homemade kimchee from an illegal food cart in a northern Chinese industrial town. Like many working outside the official system (she’s of Korean ethnicity, and her husband is out of the picture in jail), she barely scrapes by to create a home for herself and her son, on a concrete hut by the railroad tracks. The local policeman takes a fancy to her, as do other men who stop to buy her pickled vegetables. “Director Zhang Lu uses all the tools of minimalist filmmaking — long, static scenes alternated with occasional, lyrical tracking shots, little dialogue, allusive storytelling — and adds welcome humor. The characters are clearly defined by their actions, and it’s difficult not to fall in love with Cui and her little boy. Cui is struggling to maintain her ethnic identity. She is presented as a woman with a past, but her personal history is only hinted at.... Other characters are sharply drawn, either with sympathy — as with the prostitutes next door, who range from petty selfish-