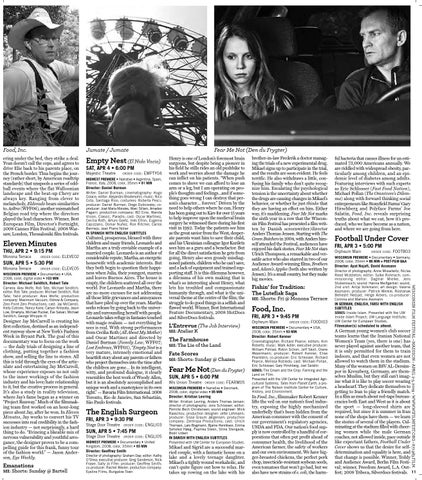 ering under the bed, they strike a deal. Yvan doesn’t call the cops, and agrees to drive Elie back to his parents place, on the French border. Thus begins the journey (rather short, by American roadtrip standards) that unspools a series of oddball events where the flat Walloonian landscape and the beat-up Chevy are always key. Ranging from clever to melancholy, Eldorado bears similarities to Aaltra (WFF06), another mismatched Belgian road trip where the directors played the lead characters. Winner, Best European Film, Director’s Fortnight, 2008 Cannes Film Festival; 2008 Warsaw, London, Thessaloniki film festivals.

Designer Jay McCarroll is creating his first collection, destined as an independent runway show at New York’s Fashion Week in Bryant Park. The goal of this documentary was to focus on the work — the daily trials of designing a line of clothing, putting together a fashion show, and selling the line to stores. All this is told through the eyes of the articulate and entertaining Jay McCarroll, whose experience exposes us not only to the inner workings of the fashion industry and his love/hate relationship to it, but the creative process in general. It’s also a study in reality television, where Jay’s fame began as a winner on “Project Runway.” Much of the filmmaking team first worked on an hour-long piece about Jay, after he won. In Eleven Minutes, Jay works to convert his TV successes into real credibility in the fashion industry — not surprisingly, a hard thing to do. “Evincing a likeable mix of nervous vulnerability and youthful arrogance, the designer proves to be a compelling guide for this frank, funny tour of the fashion world.” — Jason Anderson, Eye Weekly.

Cultured, prosperous, blessed with three children and many friends, Leonardo and Martha are a truly enviable example of a married couple. Leonardo is an author of considerable repute; Martha, an energetic housewife with academic interests. But they both begin to question their happiness when Julia, their youngest, marries and leaves Buenos Aires. The house is empty, the children scattered all over the world. For Leonardo and Martha, there are no more excuses for not addressing all those little grievances and annoyances that have piled up over the years. Martha seeks release by going back to the university and surrounding herself with people. Leonardo takes refuge in fantasies touched with magic realism — not everything he sees is real. With strong performances from Cecilia Roth (All About My Mother) and Oscar Martinez and directed by Daniel Burman (Family Law, WFF07; Lost Embrace, WFF05), “Empty Nest is a very mature, intensely emotional and heartfelt story about any parents or fathers who project themselves into the time after the children are gone… In its intelligent, witty, and profound dialogue, it clearly resembles the best work of Woody Allen, but it is an absolutely accomplished and unique work and a masterpiece in its own right.” — Bavaria Film International. 2008 Toronto, Rio de Janeiro, San Sebastián, São Paulo festivals.

Henry is one of London’s foremost brain surgeons, but despite being a pioneer in his field he stills rides an old pushbike to work and worries about the damage he can inflict on his patients. “When push comes to shove we can afford to lose an arm or a leg, but I am operating on people’s thoughts and feelings...and if something goes wrong I can destroy that person’s character… forever.” Driven by the need to help others where he can, Henry has been going out to Kiev for over 15 years to help improve upon the medieval brain surgery he witnessed there during his first visit in 1992. Today the patients see him as the great savior from the West, desperate parents want him to save their child, and his Ukrainian colleague Igor Kurilets sees him as a guru and a benefactor. But for all the direct satisfaction he gets from going, Henry also sees grossly misdiagnosed patients, children who he can’t save, and a lack of equipment and trained supporting staff. It is this dilemma however, a dilemma of his own making that is what’s so interesting about Henry, what lets his troubled and compassionate humanity through, and what is the universal theme at the centre of the film; the struggle to do good things in a selfish and flawed world. Winner, Best International Feature Documentary, 2008 HotDocs and SilverDocs festivals.

L’Entrevue (The Job Interview) SEE: Atelier K SEE: The Lie of the Land

brother-in-law Frederik a doctor managing the trials of a new experimental drug. Mikael signs up to participate in the trial, and the results are soon evident. He feels terrific. He also withdraws a little, confusing his family who don’t quite recognize him. Escalating the psychological tension is the uncertainty about whether the drugs are causing changes in Mikael’s behavior, or whether he just thinks that they are having an effect on him. Either way, it’s maddening. Fear Me Not marks the sixth year in a row that the Wisconsin Film Festival has presented a film written by Danish screenwriter/director Anders Thomas Jensen. Starting with The Green Butchers in 2004, with Anders himself attended the Festival, audiences have enjoyed his dark stories. Fear Me Not stars Ulrich Thompson, a remarkable and versatile actor who also starred in two of our Audience Award-winning films, Brothers and Adam’s Apples (both also written by Jensen). It’s a small country, but they make big movies.

Mikael and Sigrid are a successful married couple, with a fantastic house on a lake and a lovely teenage daughter. Mikael’s a tightly wound workaholic, and can’t quite figure out how to relax. He takes up rowing on the lake with his

In Food, Inc., filmmaker Robert Kenner lifts the veil on our nation’s food industry, exposing the highly mechanized underbelly that’s been hidden from the American consumer with the consent of our government’s regulatory agencies, USDA and FDA. Our nation’s food supply is now controlled by a handful of corporations that often put profit ahead of consumer health, the livelihood of the American farmer, the safety of workers and our own environment. We have bigger-breasted chickens, the perfect pork chop, insecticide-resistant soybean seeds, even tomatoes that won’t go bad, but we also have new strains of e. coli, the harm-

ful bacteria that causes illness for an estimated 73,000 Americans annually. We are riddled with widespread obesity, particularly among children, and an epidemic level of diabetes among adults. Featuring interviews with such experts as Eric Schlosser (Fast Food Nation), Michael Pollan (The Omnivore’s Dilemma) along with forward thinking social entrepreneurs like Stonyfield Farms’ Gary Hirschberg and Polyface Farms’ Joe Salatin, Food, Inc. reveals surprising truths about what we eat, how it’s produced, who we have become as a nation, and where we are going from here.

Fear Me Not (Den du Frygter)

A German young women’s club soccer teams learns that the Iranian National Women’s Team (yes, there is one) has never played against another team, that it is only permitted for them to train indoors, and that even women are not allowed to watch them in the stadium. Many of the women on BSV AL-Dersimpor in Kreuzberg, Germany, are themselves Muslim, but they still can’t imagine what it is like to play soccer wearing a headscarf. They dedicate themselves to getting to Iran to play a friendly match. In a film as much about red-tape bureaucracies both East and West as it is about the sport — long-sleeved shirts are required, but since it is summer in Iran none of the shops have them — we learn the stories of several of the players. Culminating at the stadium filled with cheering women while the male German coaches, not allowed inside, pace outside like expectant fathers, Football Under Cover shows us that the desire for selfdetermination and equality is here, and that change is possible. Winner, Teddy and Audience Award, Berlin Film Festival; winner, Freedom Award, L.A. Outfest; 2008 Tribeca, Silverdocs festivals. 11