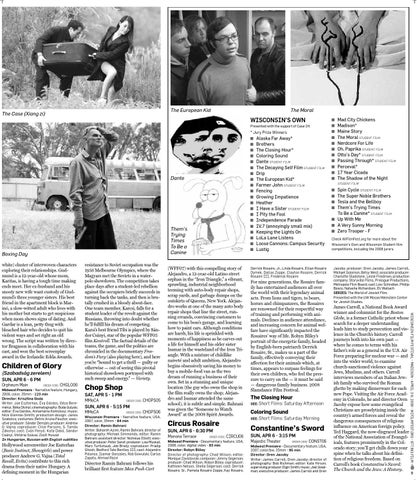 WISCONSIN’S OWN Presented with the support of Case IH.

Them’s Trying Times To Be a Canine

resistance to Soviet occupation was the 1956 Melbourne Olympics, where the Magyars met the Soviets in a waterpolo showdown. The competition takes place days after a student-led rebellion against the occupiers briefly succeeds in turning back the tanks, and then is brutally crushed in a bloody about-face. One team member, Karcsi, falls for a student leader of the revolt against the Russians, throwing into doubt whether he’ll fulfill his dream of competing. Karsi’s best friend Tibi is played by Sándor Csányi, star of the popular WFF05 film Kontroll. The factual details of the teams, the game, and the politics are chronicled in the documentary Freedom’s Fury (also playing here), and here you’re “bound to get a thrill — guilty or otherwise — out of seeing this pivotal historical showdown portrayed with such sweep and energy.” — Variety.

(WFF07) with this compelling story of Alejandro, a 12-year-old Latino street orphan in the “Iron Triangle,” a vibrant, sprawling, industrial neighborhood teeming with auto-body repair shops, scrap yards, and garbage dumps on the outskirts of Queens, New York. Alejandro works at one of the many auto body repair shops that line the street, running errands, convincing customers to come to his boss’s garage, and learning how to paint cars. Although conditions are harsh, his life is sprinkled with moments of happiness as he carves out a life for himself and his older sister Isamar in the wasteland of the Iron Triangle. With a mixture of childlike naiveté and adult ambition, Alejandro begins obsessively saving his money to buy a mobile-food van as the two dream of running a business of their own. Set in a stunning and unique location (the guy who owns the shop in the film really owns the shop; Alejandro and Isamar attended the same school), it is subtle and simple. Bahrani was given the “Someone to Watch Award” at the 2008 Spirit Awards.

For nine generations, the Rosaire family has entertained audiences all over the world with their legendary animal acts. From lions and tigers, to bears, horses and chimpanzees, the Rosaires are renowned for their respectful way of training and performing with animals. Declines in audience attendance, and increasing concern for animal welfare have significantly impacted the Rosaires’ way of life. Robyn Bliley’s portrait of the energetic family, headed by English-born patriarch Derrick Rosaire, Sr., makes us a part of the family, effectively conveying their affection for their animals which, at times, appears to surpass feelings for their own children, who feel the pressure to carry on the — it must be said — dangerous family business. 2008 Slamdance Film Festival.

Check WiFilmFest.org for more about the Wisconsin’s Own and Wisconsin Student film competitions, including the 2008 jurors.

James Carroll, a National Book Award winner and columnist for the Boston Globe, is a former Catholic priest whose search for a deeper understanding leads him to study persecution and violence in the Church’s history. Carroll journeys both into his own past — where he comes to terms with his father’s role as a general in the U.S. Air Force preparing for nuclear war — and into the wider world, to examine church-sanctioned violence against Jews, Muslims, and others. Carroll interviews members of an Italian Jewish family who survived the Roman ghetto by making dinnerware for each new Pope. Visiting the Air Force Academy in Colorado, he and director Oren Jacoby expose how some evangelical Christians are proselytizing inside the country’s armed forces and reveal the dangerous consequences of religious influence on American foreign policy. Ted Haggard, the now-disgraced leader of the National Association of Evangelicals, features prominently in the Colorado story; you’ll get chills down your spine when he talks about his definition of religious freedom. Based on Carroll’s book Constantine’s Sword: The Church and the Jews: A History.

white) cluster of interwoven characters exploring their relationships. Gudmund is a 12-year-old whose mom, Karitas, is having a tough time making ends meet. Her ex-husband and his snooty new wife want custody of Gudmund’s three younger sisters. His best friend in the apartment block is Marinó, a slow-witted adult who lives with his mother but starts to get suspicious when mom shows signs of dating. And Gardar is a lean, petty thug with bleached hair who decides to quit his violent ways and set right an old wrong. The script was written by director Bragason in collaboration with his cast, and won the best screenplay award in the Icelandic Edda Awards.