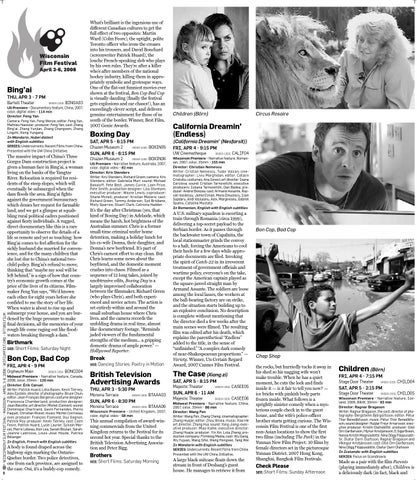 The massive impact of China’s Three Gorges Dam construction project is given a human face in Bing’ai, a woman living on the banks of the Yangtze River. Relocation is required for residents of the steep slopes, which will eventually be submerged when the dam floods the area. Bing’ai fights against the government bureaucracy which denies her request for farmable land, and we get a glimpse at squabbling rural political cadres positioned against fiesty individuals. A rugged, direct documentary like this is a rare opportunity to observe the details of a life so remote and yet so touching: how Bing’ai comes to feel affection for the sickly husband she married for convenience, and for the many children that she lost due to China’s national twochild policy. Bing’ai’s refusal to move, thinking that “maybe my soul will be left behind,” is a sign of how that country’s economic growth comes at the price of the lives of its citizens. Filmmaker Feng Yan says, “We’d known each other for eight years before she confided to me the story of her life. When water is about to rise up and submerge your house, and you are burdened by the huge pressure to make final decisions, all the memories of your rough life come raging out like floodwaters breaking through a dam.”

What’s brilliant is the ingenious use of different Canadian cultures to get the full effect of two opposites: Martin Ward (Colm Feore), the uptight, polite Toronto officer who irons the creases into his trousers, and David Bouchard (screenwriter Patrick Huard), the louche French-speaking slob who plays by his own rules. They’re after a killer who’s after members of the national hockey industry, killing them in appropriately symbolic and grotesque ways. One of the flat-out funniest movies ever shown at the festival, Bon Cop Bad Cop is visually dazzling (finally the festival gets explosions and car chases!), has an exceedingly clever script, and delivers genuine entertainment for those of us south of the border. Winner, Best Film, 2007 Genie Awards.

It’s the day after Christmas (yes, that kind of Boxing Day) in Adelaide, which means the harsh, hot brightness of the Australian summer. Chris is a former small-time criminal under home detention, making a holiday lunch for his ex-wife Donna, their daughter, and Donna’s new boyfriend. It’s part of Chris’s earnest effort to stay clean. But Chris learns some news about the boyfriend, and the domestic moment crashes into chaos. Filmed as a sequence of 12 long takes, joined by unobtrusive edits, Boxing Day is a largely improvised collaboration between the filmmaker, Richard Green (who plays Chris), and both experienced and novice actors. The action is set entirely within and around the small suburban house where Chris lives, and the camera records the unfolding drama in real time, almost like documentary footage. “Reminds jaded viewers of the fundamental strengths of the medium... a gripping domestic drama of ample power.” — Hollywood Reporter.

A body is found draped across the highway sign marking the OntarioQuebec border. Two police detectives, one from each province, are assigned to the case. Oui, it’s a buddy-cop comedy.

This annual compilation of award-winning commercials from the United Kingdom returns to the Festival for its second hot year. Special thanks to the British Television Advertising Association and Peter Bigg.

A U.S. military squadron is escorting a train through Romania (circa 1999), delivering a top-secret payload to the Serbian border. As it passes through the backwater town of Capalnita, the local stationmaster grinds the convoy to a halt, forcing the Americans to cool their heels for a few days while appropriate documents are filed. Invoking the spirit of Catch-22 in its irreverent treatment of government officials and wartime policy, everyone’s on the take, except the American captain played as the square-jawed straight man by Armand Assante. The soldiers are loose among the local lasses, the workers at the ball-bearing factory are on strike, and the situation starts building up to an explosive conclusion. No description is complete without mentioning that the director died a few weeks after the main scenes were filmed. The resulting film was edited after his death, which explains the parenthetical “Endless” added to the title, in the sense of “unfinished.” “A complex dark comedy of near-Shakespearean proportions.” — Variety. Winner, Un Certain Regard Award, 2007 Cannes Film Festival.

A large black suitcase floats down the stream in front of Deshang’s guest house. He manages to retrieve it from

Chop Shop the rocks, but hurriedly tucks it away in his shed so his nagging wife won’t make trouble. When he has a quiet moment, he cuts the lock and finds inside it — is it fair to tell you now? — ice bricks with pinkish body parts frozen inside. What follows is a sprightly sinister comedy when a mysterious couple check in to the guest house, and the wife’s police-officer brother starts getting curious. The Wisconsin Film Festival is one of the first non-Asian locations to show the first two films (including The Park) in the Yunnan New Film Project: 10 films by female directors set in the picturesque Yunnan District. 2007 Hong Kong, Shanghai, Bangkok Film Festivals.

Made as a pair with the film Parents (playing immediately after), Children is a deliciously dark (in fact, black and