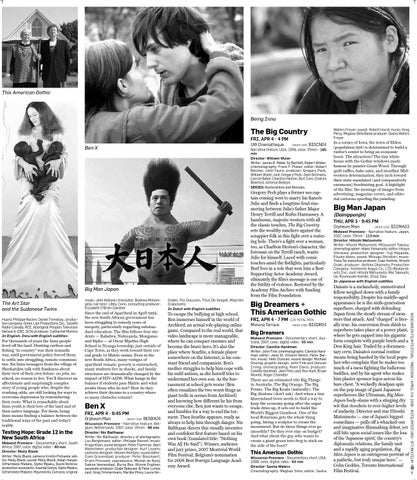 Gregory Peck plays a former sea captain coming west to marry his fiancée Julie and finds a longtime feud simmering between Julie’s father Major Henry Terrill and Rufus Hannassey. A handsome, majestic western with all the classic touches, The Big Country sets the wealthy ranchers against the scrappier folk in this fight over a watering hole. There’s a fight over a woman, too, as Charlton Heston’s character, the foreman on the Terrill ranch, wants Julie for himself. Laced with comic touches amid the fistfights, particularly Burl Ives in a role that won him a Best Supporting Actor Academy Award, ultimately the film’s message is one of the futility of violence. Restored by the Academy Film Archive with funding from the Film Foundation.

Big Man Japan The Art Star and the Sudanese Twins

For thousands of years the Innu people lived off the land. Hunting caribou and fishing “in country” was their nomadic way, until government policy forced them to settle into struggling, remote communities. Six Innu teenagers from the village of Sheshatshiu talk with frankness about their view of their own future: no jobs, no school, no reason to live. You’ll discover an affectionate and surprisingly complex story of young people who, despite the crushing odds, are still looking for ways to overcome depression by remembering their roots. What is remarkable about Innu youth is their love of the land and of their native language. For them, being Innu means finding a balance between the traditional ways of the past and today’s reality.

Since the end of Apartheid in April 1994, the new South African government has been struggling to remedy years of inequity, particularly regarding substandard education. The film follows four students — Babalwa, Noluyanda, Mongamo and Sipho — at Oscar Mpetha High School in Nyanga township, just outside of Cape Town, as they work toward their crucial grade 12 Matric exams. Even in the new South Africa, many vestiges of apartheid remain: poverty is entrenched, many students live in shacks, and family structures are dramatically changed by the impact of HIV-AIDS. What hangs in the balance if students pass Matric and what awaits those who do not? How do they achieve their dreams in a country where so many obstacles remain?

To escape the bullying at high school, Ben immerses himself in the world of Archlord, an actual role-playing online game. Compared to the real world, that video landscape is more manageable, where he can conquer enemies and become the brave hero. It’s also the place where Scarlite, a female player somewhere on the Internet, is his constant friend and companion. Ben’s mother struggles to help him cope with his mild autism, as she herself tries to understand her own son. As the harrassment at school gets worse (Ben often visualizes the two worst thugs as giant trolls in scenes from Archlord) and knowing how different he his from everyone else, Ben just wants to escape, and fumbles for a way to end the torment. Then Scarlite appears, ready as always to help him through danger. Nic Balthazar directs this visually inventive and confident first feature based on his own book (translated title: “Nothing Was All He Said”). Winner, audience and jury prizes, 2007 Montréal World Film Festival; Belgium’s nomination for 2008 Best Foreign Language Academy Award.

There are an estimated 160 Big Things in Australia. The Big Orange. The Big Potato. The Big Koala (naturally). The Big Abalone (don’t ask). And when a tiny Queensland town needs to find a way to keep the economy going after the sugar trade dries up, it sets out to build the World’s Biggest Gumboot. One of the local Rotarians gets the whole thing going, hiring a sculptor to create the monument. But do these things ever go smoothly? Do they ever stay on budget? And what about the guy who wants to create a giant green tree-frog to stick on the side of the boot?

In a corner of Iowa, the town of Eldon (population 998) is determined to build a visitor’s center to bring an economic boost. The attraction? The tiny white house with the Gothic windows made famous by painter Grant Wood. Through quilt raffles, bake sales, and steadfast Midwestern determination, they inch toward their state-mandated (and comparatively enormous) fundraising goal. A highlight of the film: the montage of images from advertising, magazine covers, and editorial cartoons spoofing the painting.

Daisato is a melancholy, unmotivated fellow weighed down with a family responsibility. Despite his middle-aged appearance he is the sixth-generation superhero, charged with defending Japan from the steady stream of monsters that attack. And “charged” is literally true: his conversion from shlub to superhero takes place at a power plant, where he gets zapped into his gigantic form complete with purple briefs and a Don King hair. Trailed by a documentary crew, Daisato’s normal routine means being hassled by the local populace who complain that he makes too much of a mess fighting the ludicrous baddies, and by his agent who makes him plaster sponsor logos across his bare chest. “A wickedly deadpan spin on the pop image of giant Japanese superheroes like Ultraman, Big Man Japan body-slams with a stinging dry wit that ricochets to ever-higher levels of audacity. Director and star Hitoshi Matsumoto — one of Japan’s biggest comedians — pulls off a whacked-out and imaginative filmmaking debut, yet still hits upon social issues like the loss of the ‘Japanese spirit,’ the country’s diplomatic relations, the family unit and a rapidly aging population. Big Man Japan is an outrageous portrait of a pathetic, but truly unique hero.” — Colin Geddes, Toronto International Film Festival. 7