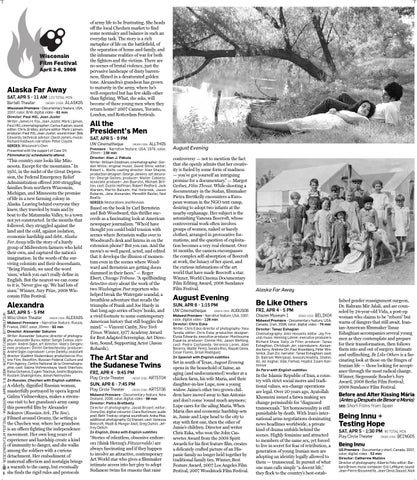 “This country sure looks like Minnesota. Except for the mountains.” In 1935, in the midst of the Great Depression, the Federal Emergency Relief Administration offered 200 struggling families from northern Wisconsin, Michigan, and Minnesota the promise of life in a new farming colony in Alaska. Leaving behind everyone they knew, they traveled by train and by boat to the Matanuska Valley, to a town not yet constructed. In the months that followed, they struggled against the land and the cold, against isolation, economic hardship and debt. Alaska Far Away tells the story of a hardy group of Midwestern farmers who held their own, and captured the nation’s imagination. In the words of the surviving colonists and their descendants, “Being Finnish, we used the word ‘sissu,’ which you can’t really define in English. But the nearest we can come to it is, ‘Never give up.’ We had lots of sissu.” Winner, Jury Prize, 2008 Wisconsin Film Festival.

A elderly, dignified Russian woman, masterfully portrayed by opera legend Galina Vishnevskaya, makes a strenuous visit to her grandson’s army camp this powerful film by Alexander Sokurov (Russian Ark, The Son). Filmed around Grozny, the setting is the Chechen war, where her grandson is an officer fighting the independence movement. Her own long years of experience and hardship create a kind of immunity to danger, and she walks among the soldiers with a curious detachment. Her embodiment of maternal affection and nostalgia brings a warmth to the camp, but eventually 6 she finds the rigid rules and protocols

of army life to be frustrating. She heads off the local Chechen market to find some normalcy and balance in such an everyday task. The story is a rich metaphor of life on the battlefield, of the separation of home and family, and the inhumane realities of war for both the fighters and the victims. There are no scenes of brutal violence, just the pervasive landscape of dusty barrenness, filmed in a desaturated golden tone. Alexandra’s grandson has grown to maturity in the army, where he’s well-respected but has few skills other than fighting. What, she asks, will become of these young men when they return home? 2007 Cannes, Toronto, London, and Rotterdam Festivals.

Based on the book by Carl Bernstein and Bob Woodward, this thriller succeeds as a fascinating look at American newspaper journalism. “Who’d have thought you could build tension with scenes where Bernstein walks over to Woodward’s desk and listens in on the extension phone? But you can. And the movie’s so well paced, acted, and edited that it develops the illusion of momentum even in the scenes where Woodward and Bernstein are getting doors slammed in their faces.” — Roger Ebert, Chicago Tribune. “A spellbinding detective story about the work of the two Washington Post reporters who helped break the Watergate scandal, a breathless adventure that recalls the triumphs of Frank and Joe Hardy in that long-ago series of boys’ books, and a vivid footnote to some contemporary American history that still boggles the mind.” — Vincent Canby, New York Times. Winner, 1977 Academy Award for Best Adapted Screenplay, Art Direction, Sound, Supporting Actor (Jason Robards).

“Stories of relentless, obsessive endeavors (think Herzog’s Fitzcarraldo) are always fascinating and if they happen to involve an attractive, contemporary Art World star who gives a filmmaker intimate access into her ploy to adopt Sudanese twins for reasons that raise

August Evening controversy — not to mention the fact that she openly admits that her creativity is fueled by some form of madness — you’ve got yourself an intriguing premise for a documentary.” — Margot Gerber, Film Threat. While shooting a documentary in the Sudan, filmmaker Pietra Brettkelly encounters a European woman in the NGO tent camp, desiring to adopt two infants at the nearby orphanage. Her subject is the astonishing Vanessa Beecroft, whose controversial work often involves groups of women, naked or barely clothed, arranged in provocative formations, and the question of exploitation becomes a very real element. Over 16 months, the camera encompasses the complex self-absorption of Beecroft at work, the lunacy of her quest, and the curious infatuations of the art world that have made Beecroft a star. Winner, World Cinema Documentary Film Editing Award, 2008 Sundance Film Festival.

Set in south of Texas, August Evening opens in the household of Jaime, an aging (and undocumented) worker at a chicken farm, his wife Maria, and their daughter-in-law Lupe, now a young widow. Jaime’s other two grown children have moved away to San Antonio and don’t come ’round much anymore; Lupe cares for the ailing Maria. When Maria dies and economic hardship sets in, Jamie and Lupe head to the city to stay with first one, then the other of Jamie’s children. Director and writer Chris Eska, who won the John Cassevetes Award from the 2008 Spirit Awards for his first feature film, creates a delicately crafted picture of an Hispanic family no longer held together by traditional family ties. Winner, Best Feature Award, 2007 Los Angeles Film Festival, 2007 Woodstock Film Festival.

In the Islamic Republic of Iran, a country with strict social mores and traditional values, sex-change operations are legal. Over 20 years ago, Ayatollah Khomeini issued a fatwa making sex change permissible for “diagnosed transsexuals.” Yet homosexuality is still punishable by death. With Iran’s international arms negotiations dominating news headlines worldwide, a private kind of drama unfolds behind the scenes. Highly feminine and attracted to members of the same sex, yet forced to live in secret for fear of retribution, a generation of young Iranian men are adopting an identity legally allowed to them — transsexual. In pursuit of what one man calls simply “a decent life,” they flock to the country’s best-estab-

lished gender reassignment surgeon, Dr. Bahram Mir Jalali, and are counseled by 24-year-old Vida, a post-op woman who claims to be “reborn” but warns of dangers that still await. Iranian-American filmmaker Tanaz Eshaghian accompanies several young men as they contemplate and prepare for their transformation, then follows them into and out of surgery. Intimate and unflinching, Be Like Others is a fascinating look at those on the fringes of Iranian life — those looking for acceptance through the most radical change. Winner, Siegessaule Reader’s Jury Award, 2008 Berlin Film Festival; 2008 Sundance Film Festival.