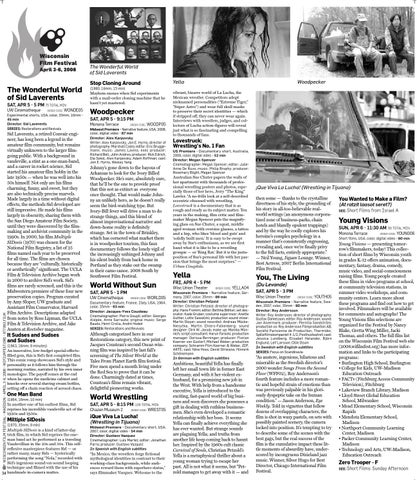 Sid Laverents, a retired Convair engineer, has long been a legend in the amateur film community, but remains virtually unknown to the larger filmgoing public. With a background in vaudeville, a stint as a one-man-band, and a career in rocket science, Sid started his amateur film hobby in the late 1950s — when he was well into his 50s himself. Not only are his films charming, funny, and sweet, but they are also technically precise marvels. Made largely in a time without digital effects, the methods Sid developed are still impressive. He made his films largely in obscurity, sharing them with the San Diego Amateur Film Society, until they were discovered by the filmmaking and archivist community in the 1990s. In 2000, his film Multiple SIDosis (1970) was chosen for the National Film Registry, a list of 25 films named each year to be preserved for all time. The films are chosen because they are “culturally, historically or aesthetically” significant. The UCLA Film & Television Archive began work in 2000 to archive Sid’s work. Sid’s films are rarely screened, and this is the Midwestern premiere of these four new preservation copies. Program curated by Amy Sloper, UW graduate and Assistant Film Conservator, Harvard Film Archive. Descriptions adapted from notes by Ross Lipman, the UCLA Film & Television Archive, and Jake Austen at Roctober magazine.

An innovative, low-budget special-effectsfilled gem, this is Sid’s first completed film. This comic romp showcases Sid’s style and personality as it follows him through the morning routine, narrated by his own inner monologue. The payoff comes at the end when he opens the medicine cabinet and knocks over several shaving cream bottles, setting off a chain reaction of aerosol chaos.

In another one of his earliest films, Sid reprises his incredible vaudeville act of the 1920s and 1930s.

Multiple SIDosis is a kind of latter-day trick film, in which Sid reprises the oneman band act he performed as a traveling Vaudevillian in the 20s and 30s. This selfreflexive masterpiece features Sid — or rather many, many Sids — hysterically performing the song “Nola,” recorded with Sid’s ingenious sound-on-sound looping technique and filmed with the use of his 34 handmade in-camera mattes.

Mayhem ensues when Sid experiments with a mail-order cloning machine that he hasn’t yet mastered.

Johnny’s gone down to the bayous of Arkansas to look for the Ivory Billed Woodpecker. He’s sure, absolutely sure, that he’ll be the one to provide proof that this not as extinct as everyone once thought. That would make Johnny an unlikely hero, as he doesn’t really seem the bird-watching type. But Ivory-Bill fever will drive a man to do strange things, and this blend of almost improvisational narrative and down-home reality is definitely strange. Set in the town of Brinkley, which has cornered what market there is in woodpecker tourism, this faux documentary follows the lonely vigil of the increasingly unhinged Johnny and his silent buddy from back home in Portland as they stake out the swamp in their camo canoe. 2008 South by Southwest Film Festival.

vibrant, bizarre world of La Lucha, the Mexican wrestler. Competitors adopt nicknamed personalities (“Extreme Tiger,” “Súper Astro”) and wear full skull masks to preserve their secret identities — which if stripped off, they can never wear again. Interviews with wrestlers, judges, and collectors of Lucha action-figures will reveal just what is so fascinating and compelling to thousands of fans.

Australian Sue Chuter papers the walls of her apartment with thousands of professional wrestling posters and photos, especially those of her hero, Jerry “The King” Lawler. “A no-frills look at a self-described eccentric obsessed with wrestling, Lovestruck is a documentary that is as rough and ready as its subject matter. Ten years in the making, film critic and filmmaker Megan Spencer puts the magnifying glass on Sue Chuter, a squat, middle aged woman with oversize glasses, a tattoo and a lisp, who likes ‘blood and guts’ and ‘solidly built men.’ It is easy to be swept away by Sue’s enthusiasm, as we see first hand what it is like to be a wrestling groupie — or ‘Ring Rat.’ But it is the juxtaposition of Sue’s personal life with her passion that brings the most surprises.” — Urban Cinephile.

Although categorized here in our Restorations category, this new print of Jacques Cousteau’s second Oscar-winning film was inspired by last fall’s screening of The Silent World at the Tales From Planet Earth film festival. Five men spend a month living under the Red Sea to prove that it can be done. Charmingly dated at times, Cousteau’s films remain vibrant, delightful pioneering works.

“In Mexico, the wrestlers forge fictional mythological identities in contrast to their working-class backgrounds, while audiences reward them with superhero status,” says filmmaker Vasquez. Welcome to the

then some — thanks to the crystalline directness of his style, the grounding of his story in all-too-believable realworld settings (an anonymous corporatized zone of business-parks, chain hotels and blandly opulent trappings) and by the way he coolly explores his heroine’s complex psychology in a manner that’s consistently engrossing, revealing and, once we’re finally privy to the full facts, entirely appropriate.” — Neil Young, Jigsaw Lounge. Winner, Best Actress, 2007 Berlin International Film Festival.

Ambitious, beautiful Yella has finally left her small town life in former East Germany, and with it her violent exhusband, for a promising new job in the West. With help from a handsome executive, Yella is introduced to the exciting, fast-paced world of big business and soon discovers she possesses a gift in dealing with ruthless businessmen. She’s even developed a romantic relationship with her boss. It seems Yella can finally achieve everything she has ever wanted. But strange sounds are plaguing Yella; and truths from another life keep coming back to haunt her. Inspired by the 1960s cult classic Carnival of Souls, Christian Petzold’s Yella is a metaphysical thriller about a young woman trying to escape her past. All is not what it seems, but “Petzold manages to get away with it — and

“As austere, ingenious, hilarious and miserable as the Swedish director’s 2000 wonder Songs From the Second Floor (WFF02), Roy Andersson’s fourth feature includes a more romantic and hopeful strain of emotions than was previously palpable in his gloriously dyspeptic take on the human condition.” — Jason Anderson, Eye Weekly. Told in vignettes that follow dozens of overlapping characters, the film is shot in waxy pastels, on sets with possibly painted scenery, the camera locked into position. It’s tempting to try to describe some of the scenes with the best gags, but the real success of the film is the cumulative impact these little moments of absurdity have, underscored by incongruous Dixieland jazz music. Winner, Silver Hugo for Best Director, Chicago International Film Festival.

You Wanted to Make a Film? (At ratzit laasot seret?) SEE: Short Films from Israel A